Raghuram Rajan, RBI Governor has expressed concerns over world being dragged into the situation like Great Depression of 1930.

His reasoning is based on unconventional monetary policies of the US Federal Reserve and the European Central Bank. He further said, their zero lower-bound interest rates are distorting markets and countries are turning protectionist.

What is Great Depression?

The Great Depression was a severe worldwide economic depression in the 1930s. The timing of the Great Depression varied across nations; however, in most countries it started in 1929 and lasted until the late 1930s. It was the longest, deepest, and most widespread depression of the 20th century.

Worldwide GDP fell by 15% from 1929 to 1932. In the 21st century, the Great Depression is commonly used as an example of how far the world’s economy can decline.

The Great Depression started in the United States after the stock market crashed in October 1929 and then gradually spread to other parts of the world. This led to a contraction of economic growth and huge unemployment. Countries tried to solve this problem by devaluing their currencies against other currencies in order to increase their international competitiveness.

But problem aggravates because this devaluation can be started by anyone. Why America only? I too have right to do so- Japan, EU etc

IASbaba is pointing to US Quantitative Easing and EU crisis. This was the same situation aftermath of Great Depression.

And it is this currency war that Dr Rajan is pointing to and worried about. In the aftermath of the financial crisis which started in September 2008, countries have printed money in an effort to revive economic growth.

This explains the statement of Dr Rajan “”The question is are we now moving into the territory in trying to produce growth out of nowhere we are in fact shifting growth from each other, rather than creating growth.”

A ranking of destinations for attractiveness to foreign investors has placed India at the top among 110 countries. China has secured the 65th position and the U.S. is at the 50th. In the 2014 index, India was at the sixth position and Hong Kong was number one.

The ranking is based on an index for baseline profitability that assumes that three factors affect the ultimate success of a foreign investment: 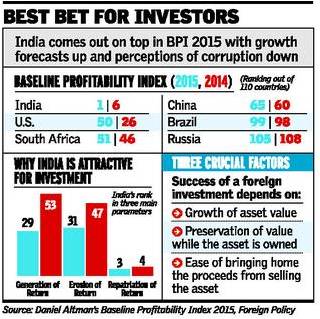 Government will hold the tenth round of auctions for oil and gas blocks under the New Exploration Licensing Policy (NELP) in the current fiscal.

The auction, which will be held almost four years after the ninth round received a lukewarm response in 2010-11, is expected to bring in investments and boost domestic production.

Government is looking to introduce “open acreage” system and also change the formula for the production sharing agreement.

The open acreage system will enable bidders to bid for blocks on offer at any time of the year, and data for these blocks would be made available to the bidders through the National Data Repository.

New Exploration Licensing Policy (NELP) was conceptualised by the Government of India, during 1997-98 to provide an equal platform to both Public and Private sector companies in exploration and production of hydrocarbons with Directorate General of Hydrocarbons (DGH) as a nodal agency for its implementation. It was introduced to boost the production of oil and natural gas and providing level playing field for both public and private players.

What is Production Sharing Contract?

Production sharing agreements are a common type of contract signed between a government and a resource extraction company concerning how much of the resource (usually oil) extracted from the country each will receive. Production sharing agreements can be beneficial to governments of countries that lack the expertise and/or capital to develop their resources and wish to attract foreign companies to do so.

What is Open Acreage System?

Let’s keep it simple- It allows an explorer to study the data available and bid for blocks of his choice.

Not so important news. Just have a read.

India came first in the Baseline Profitability Index helped by its improved ranking in the Transparency International’s Corruption Perception Index — in 2014, the country was at the 85th position out of 175 countries as compared to its ranking of 94 out of 177 countries in 2013.

In 2014, the average BPI score across all countries was 0.99; this year it is 1.03 — meaning the expected returns over the next five years are about three-quarters of a per cent higher a year.