3. How the recent disasters in Uttarakhand and J&K were different in terms of their causative factors, characteristics and impact? Discuss in detail. (25 marks)

Directives: This question was asked to demonstrate the importance of newspaper reading. And it is not only about reading but also extracting valuable information wrt your optional. These events were in news for quite a long period of time and many articles and reports were written on them. From now on, please focus on weather, climate, environment and disaster related news/ articles in the newspapers/ magazines.

The question is simple if you knew the actual facts otherwise one could only guess the right answer. Apart from natural climatic factors, there were man made reasons which many of you forgot to mention. Go through the following articles to broaden your understanding:

4. Explain the mechanism of monsoon in the Indian subcontinent. What are those phenomena that disrupt the normal monsoon cycle? Explain (25 marks)

Directives: A very direct question but required extensive use of diagrams and maps. Most of you knew the answer but could not organize the information properly. In climatology, you have to be more generous in using the relevant diagrams and that too of UPSC optional standard. Most of you used 10th standard diagrams to demonstrate the phenomena which is not acceptable. Moreover, the question had asked about the Indian subcontinent that included our neighbors too but very few of you explained the monsoon for the entire subcontinent and focused only on India. These small mistakes can cost you vital points.

5. What is the difference between planetary and local winds? What changes do local winds bring to a region? Explain by taking at least one example each from Africa and Europe. (25 marks)

3. Discuss the origin, movement and distribution of temperate cyclones. Also explain the associated weather changes caused by the movement of cold and warm fronts in an area. (25 marks)

Directives: The first part is simple and straight. The second part of the question, however, required complete treatment associated with movement of a temperate cyclone. For example, four varieties of movement occur in a typical temperate cyclone:

These movements are associated with changes in the local moisture, temperature and pressure conditions. You were supposed to enumerate these changes. These are simple points which can be found in any general reference book.

Few diagrams for your reference:

4. Tropical cyclones are a recurrent climatic phenomena in India. Discuss the origin and movement of tropical cyclones that originate in the Bay of Bengal. Take cases of Neelam and Hudhud to explain your answer. (25 marks)

Directives: The question clubbed theoretical understanding with current developments/ examples. You know everything TCs but here you were supposed to seamlessly bind the recently occurred TCs with your theoretical presentation. Of course, the reasons are similar for both of them but the areas affected by them varied. Here are two beautiful graphics: 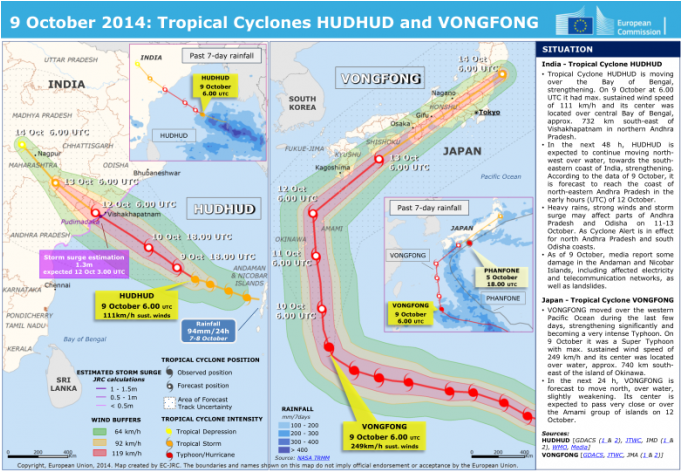 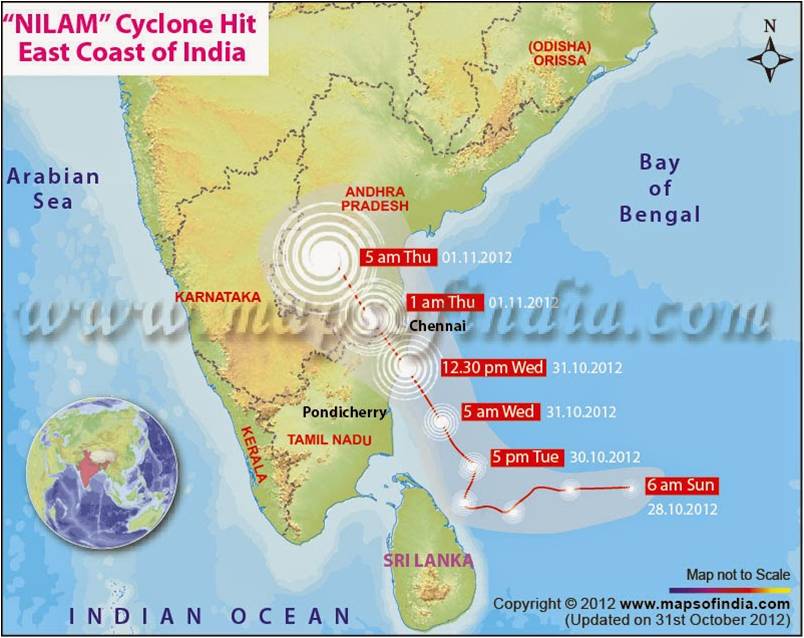 5. How does western disturbance originate? What effects does it have on Indian agriculture? (15 marks)

Directives: very simple and direct. Plenty of sources available for it. Go through the following write up taken from the internet: 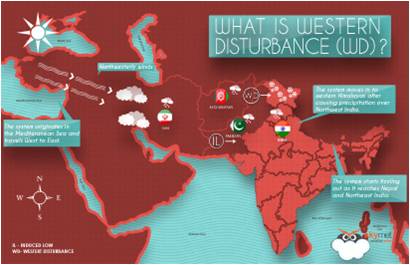 Western disturbance is a frequently used terminology to describe weather in the Indian sub-continent. If you are among the ones that have often found yourself asking questions on hearing the term ‘Western Disturbance’, this article could be of some help.

Dr R.M. Saxena, Professional Meteorologist at Skymet Weather defines Western Disturbance as “a low pressure area or a trough over surface or the upper-air in the westerly winds regime, north of 20°N, causing changes in pressure, wind pattern and temperature fields. It is accompanied by cloudiness, with or without precipitation.”

The term Western Disturbance (WD) was coined by Indian meteorologists for describing the systems moving from the west to east direction.

Where do Western Disturbances originate from?

WDs originate in the Caspian Sea or the Mediterranean Sea as extra-tropical cyclones. They gradually travel across the middle-east from Iran, Afghanistan and Pakistan to enter the Indian sub-continent.

When are Western Disturbances the strongest?

Though WDs move across the Indian region throughout the year, they are in their peak during winter months of January and February. Their effect is minimal during the monsoon months in India.

What are the induced systems and their effect?

Induced systems are secondary low pressure areas or cyclonic circulations induced by the primary WD. Generally these are observed over central Pakistan and adjoining west Rajasthan region which gradually shift eastwards, accentuating rain over Northwest India.  They also lead to rise in temperatures, fall of surface pressure, appearance of high, medium and low clouds. Normal pressure and wind patterns are restored with the moving away of the disturbance.

How do Western Disturbances affect Agriculture?

Western Disturbances along with their induced systems are the principle rain producing systems during non-monsoonal months over Northwest India including Punjab, Haryana, Uttar Pradesh and Delhi. Their effect sometime extends up to Gangetic plains and Northeast India. They are also responsible for bringing snowfall in the higher reaches of Jammu & Kashmir, Himachal Pradesh and Uttarakhand.

Western Disturbance brings winter and pre-monsoon rain and is important for the development of the Rabi crop in the Northern subcontinent. Considering that wheat is one of the most important Rabi crops, which is the staple diet of people in this region, winter showers contribute to meet India’s food security.

3. Discuss the factors responsible for long term climate change. What evidences do we have that support current global warming. Explain. (25 marks)

Directives: The long term factors are:

Expand these factors along with suitable diagrams. 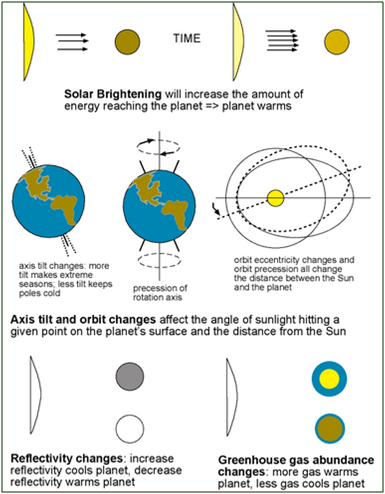 There are multiple evidences: 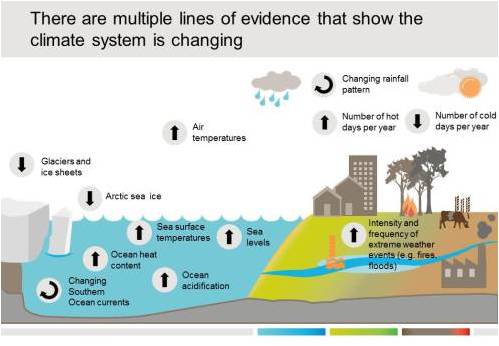 Directives: This is a direct question. You only needed to make it presentable and innovative by using diagrams and flowcharts. The second part of the question required more focused treatment. Keep in mind the fact that any component/ stage of a cycle will either add or subtract water. 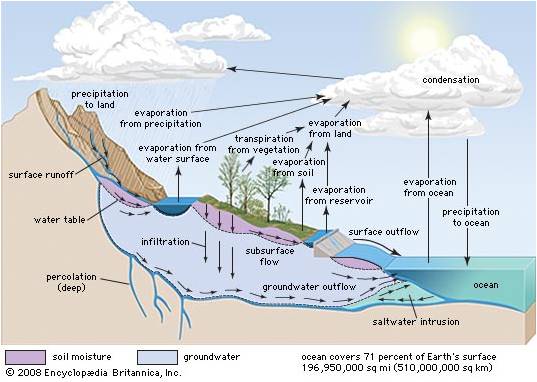 5. Describe the characteristics and global distribution of permafrost. (15 marks)

Directives: Go through this detailed article. It covers all the important dimensions related to permafrost: 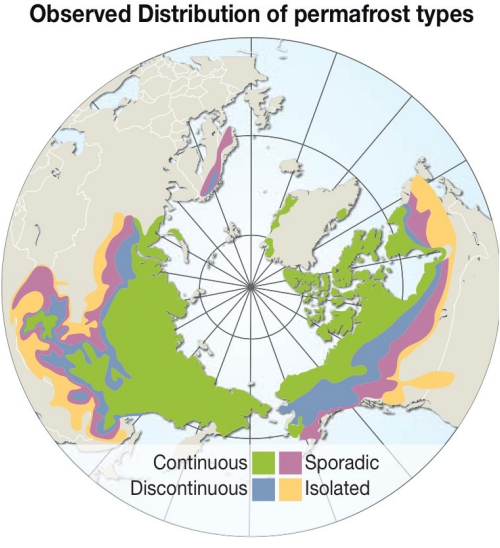