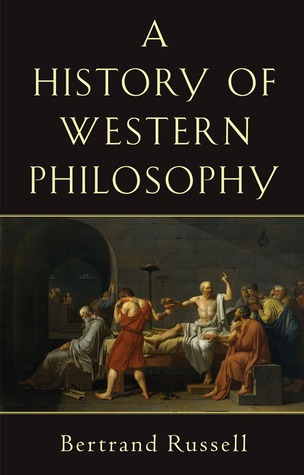 A History of Western Philosophy

There are many ways to read this book, in its way, one of the key works of twentieth century philosophy. It can be used as an encyclopedia of philosophy, ordered not alphabetically, but chronologically. Many people in fact do use it like that, looking up in the index a particular philosopher (or less often) a theme, and then reading Russell’s short, accessible, witty summaries of the great ideas and individuals.

Then it may be used – as Russell asks us too- as a work of social history, comparing and explaining general trends and processes in not only philosophy but in human civilization. Very few people use it like that.

Then again, it can simply be used as a good read – a chapter a week for one and a half years, for that is how many chapters there are. Many people, doubtless, buy it with something like this in mind. Rather fewer, I would say, persist in that optimistic belief. For Russell’s History of Western Philosophy is simply too long, too episodic, too tiring to be read like that.

But there is another way to read ‘History of Western Philosophy’. And it is an enjoyable one. read as kind of literary ‘pot pourri’ to be dipped into as and when one fancies. (Like a real pot pourri, you would be better advised to place the book on a table and let it permeate the atmosphere rather than devour it entire.) Yet it is a bright and refreshing collection of Russell’s ‘favorite bits’, as it were, from a lifetime of delving into and exploring the rich mine of literature that is philosophy – a literature often unappreciated by the pedants and technicians that pass themselves off as philosophers these days in the universities.

The History of Western Philosophy is one of Russell’s most influential works. It’s flaw, like the man himself, is in being too ambitious and a tad conceited. But it still stands head and shoulders above the rest.