Recent conversations with Chinese scholars, Communist Party of China members and officials indicate that the ‘One Belt, One Road’ (OBOR) initiative of Xi Jinping’s government in china is likely to become the pivotal key of Chinese engagement with the world. 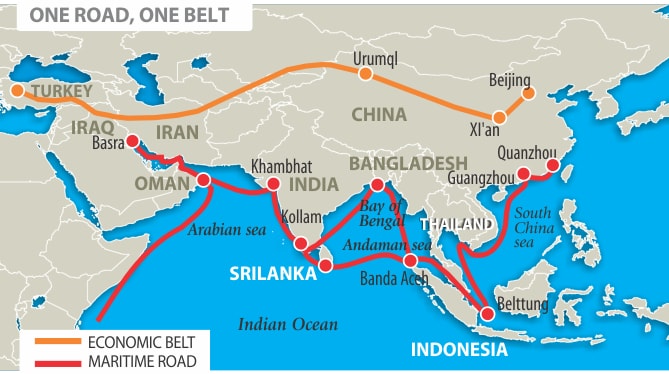 Structural challenges confront the Chinese formulations and the OBOR proposal

Fundamentally, India needs to resolve for itself whether OBOR represents a threat or an opportunity.

The answer undoubtedly ticks both boxes.

As soon as possible India should come up with a decision regarding OBOR, as whether to support it or not.

Project cost: Has increased to about Rs 70,000 crore

Handling the rolling out the Optical Fibre Network:

Concessionaires be given the job of:

There is a need to focus on:

A test of dignity and democracy

Towards a law on euthanasia

Over the barrel: Waiting for a big bang- The global economy is in trouble but India is attracting positive comment. Finance minister must make the most of the moment

A scheme for change- Ten years on, MGNREGA requires constant review. And consistency in political support

Clean up the books- Government setting up an asset reconstruction company is a good idea. But test will lie in giving its managers a free hand