1. The campaign for the eradication of Polio and it’s eventual success provides an ideal template for formulating long term strategies for similar objectives. Comment. Also identify areas in which this template must be applied to achieve desired goals. Give reasons for selecting these areas.

India, which once had the highest number of polio cases in the world, is now polio-free, an achievement the World Health Organisation has certified. Long recognised as one of the most difficult places to eradicate polio, India stands as an example for how to mount a successful disease response effort under the most complex circumstances.

Vital collaboration between the Indian government and the global polio eradication initiative, trained millions of volunteers, social mobilizers, and health workers; accessed households untouched by other health initiatives; mapped and brought health interventions to chronically neglected communities; and established a standardized, real-time global surveillance and response capacity. All these made it possible to secure a polio-free India and the same template can be applied to achieve desired goals in other areas.

If we can supply the hardest-to-reach children with the polio vaccine, it will prove that we can also get food, clean water and other health services to them. The evidence is there: in the process of eradicating this debilitating disease, India has improved immunization and health systems more broadly. It has developed a blueprint for reaching every last child with life-saving interventions, even in remote, socially excluded and marginalized communities.

India’s has been declared as Polio Free country in 2008. With its incessant efforts, India marked this significant step with planned strategies to eradicate rampant polio virulence.

Steps taken in this regard:

> Massive advertisements at all levels keeping in mind to reach all the sections of the society.

> Involvement of civil society, celebrities, media and appointment of volunteers for door to door medical campaigns.

These successful steps are seen as an ideal template and can be implemented in various programmes to eradicate many social ills. Some of them are discussed below:

1) Eradication of Hunger and Malnutrition – It is reported that a little less than half of the the children in India are stunted and malnourished. Even though we’ve initiated number of schemes and policies, they yielded limited success due to various deficiencies, and these can be filled with the above template.

2) Eradication of preventable diseases by vaccination – India is recorded in the top list of infants and children are dying with preventable diseases like diarrhoea, cholera, malaria, Hepatitis etc. Mission Indradanush needs to be revamped with the initiatives like that of Polio to achieve good success as work of both are similar.

3) Prevention and eradication of vector borne diseases – Hundreds and thousands of children and adults are falling ill and succumbing to death with vector diseases like dengue, malaria, yellow fever etc. National Vector Borne Diseases Control Programme will be successful, if it adopts the above template in letter and spirit.

4) National TB Control Programme and AIDS eradication drives – TB and AIDS controlled very little due to poor awareness about disease, medication and their spread. Moreover, the taboo established with these diseases added psychological woes to the patients. Only targetted and determined missions like Polio Eradication would surpass these issues.

2. The taboo associated with sex education must give way to greater social acceptance. Do you agree? Why do policy experts give so much emphasis on the need of introducing sex education in schools and colleges? Analyse.

India is known as land of Kamsutra. It is endowed with ancient temples like Khajuraho and caves like Ellora and Ajanta depicting ‘Kama’. Hence, sex education was very well accepted and practiced that too at open and sacred places like temples in ancient times. But, with time Indians have associated sex education with taboo.

(1) Talking about sex (even with family elders) being immoral has being ingrained in minds of Indian people from generations.

(2) There is a misconception that sex education will deviate the minds of young children from studies, especially in middle class families.

(3) Our society is plagued with serious gender divide which has resulted in even worse situation of girls in matter of sex education.

Thus Sex education has an important role in the overall development of an individual and it must be made compulsory in school curriculum. The concerned teachers should take the subject objectively and should not shy away from their responsibility; school management must provide training to teachers for delivery of the subject. Government must arrange adult classes to take care of the school dropouts and other weaker sections. The changing socio economic conditions demands that the taboo associated with the word SEX must be shed away and must become a discourse of drawing room. 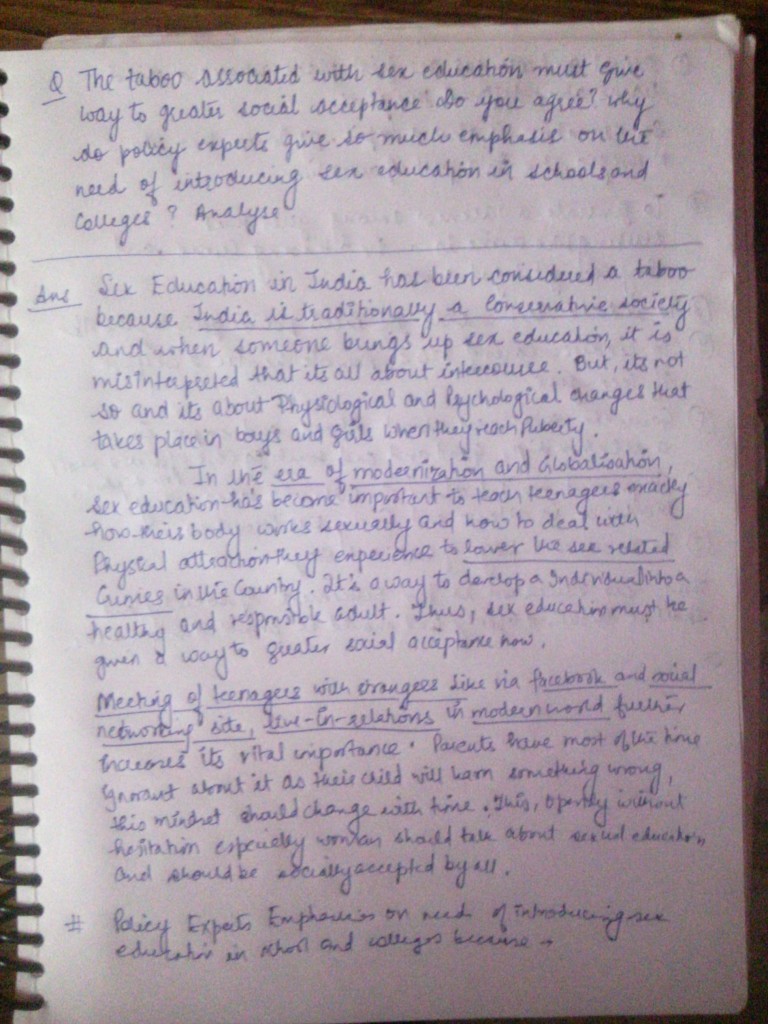 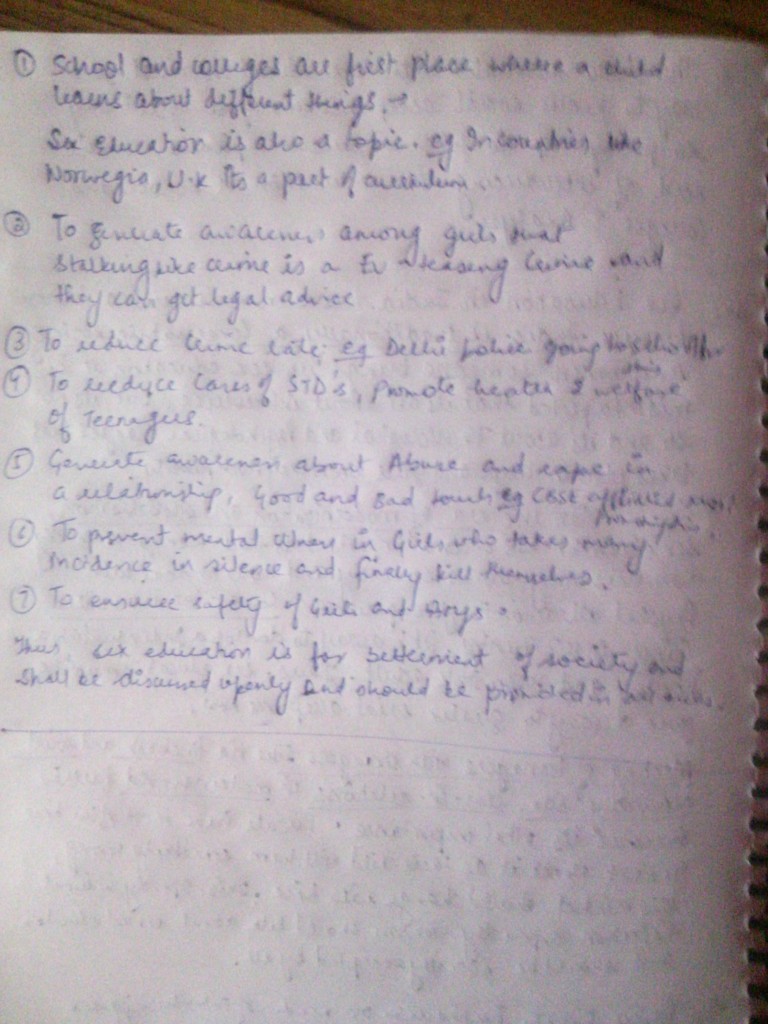 3. The story of Indian cities is nothing but growth without commensurate civic infrastructure. Do you agree? In this context, what role can the Smart City projects play? Analyze.

U.N.’s ‘2011 Revision of the World Urbanization Prospects’ report says India will add another 497 million to its urban population between 2010 and 2050.

As per census of India 2011,30% of Indian population already loves in urban areas, though the cities have increased, the growth of civic infrastructure has not kept pace. The reasons for this are:

The basic aim of smart city project is to create self sustaining cities.

Most of the Indian cities were established in medieval period. With increase in urbanisation following industrial revolution, cities expanded on the periphery of the main centre. There was lack of planning and growth took place without commensurate civil infrastructure. Examples are congested metro cities like Mumbai, Kolkata, cities facing worst air pollution like Delhi. However, there have been few well planned cities like Raipur and Chandigarh.

(1) Use of ICT in various facets of city life and administration increasing the standard of living.

(2) POLLUTION CONTROL:
# Healthy and clean environment in the cities can be ensured.
# Proper sewer lines and STPs, seamless and clean transport facilities, strategic location of industries and making them comply with environment laws is must.
# No slums and illegal encroachments should be allowed to foment in cities.

(4) INCLUSIVENESS: City can be designed to be friendly for PwDs, women and children, which is not found in many Indian cities presently.

(5) ECONOMIC CENTRES: Foreign investors should be attracted to establish their financial centers and industries in city so that civic authorities do not find short of revenue.

Smart city initiative can relieve the metro cities from stress suffered due to increase in influx. Moreover, it will prevent long distance migration of people by providing them means of employment in cities nearby. Hence, if executed properly, it can be a panacea to problem of rapid urbanization faced by India