1. The fusion of Indian classical dance forms with popular Western culture is an innovative approach and must be explored further to enhance their reach and popularity. Do you agree? Critically examine.

Various cultures in the world are expressed by many aspects, one of those is dance. These cultures have preserved, nourished and took pride in respective dance forms. With globalization, changing times, popular culture and media, etc. these traditional boundaries of dance forms are getting thinner. The fusion of Indian classical dance forms (Bharatnatyam, katthak, etc.) with popular western culture is an innovative approach and this can be explored further to enhance their teach and popularity. 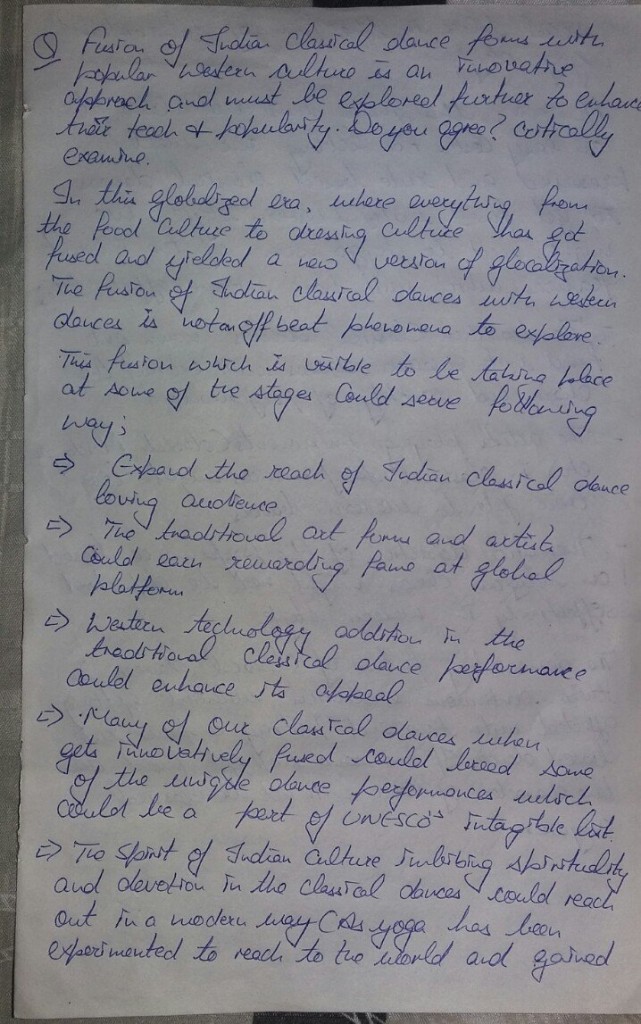 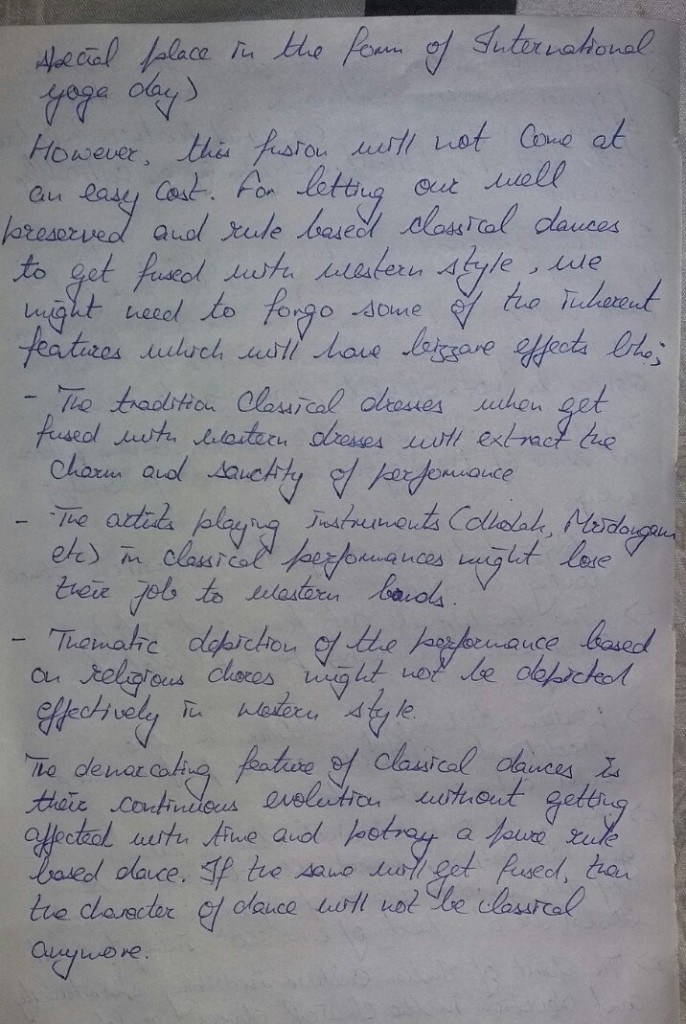 2. The regulatory framework of an economy comprises various bodies, statutes and regulations. However, the pace of change has been so rapid particularly in service delivery like banking, e-commerce and app based services that the regulators are finding it difficult to cope up. Analyze by giving examples.

Write briefly about the sectors and the regulators, how the rapid changes in service industry is have led to legal and regulatory vacuum

Why the regulation is lagging behind:

Problems faced by the regulators

Strong regulatory framework is sine qua non for effective and efficient working for any sector, particularly more so in those areas which has direct impact on day to day life of people. Regulations impart accountability, transparency in the system, brings level playing field and establishes adherence to principles.

Indian economic system is fine examples of healthy regulatory framework where consortium of RBI, SEBI, CCI, IRDA, PFRDA covers wide range of activities from banking to security trading to online financial transactions. This has overall imparted a stability to economic fundamentals of the country and ensured that system is able to handle global vulnerabilities without major debacles.

However recent times has witnessed swift pace of technological changes which are bringing widespread disruption in the mainstream economic ecosystem. E-commerce, app based transactions, complex financial transactions, personal mobile banking are some of the examples. These changes however have brought their own set of challenges and regulators are finding it difficult to cope up. For .eg-

1.It took months for SEBI to come out with norms related to Initial Public Offer of technology intensive firm which were unsuitable to register in current format on stock markets
2.Complex financial instruments involving multiple operations are difficult to be covered under single regulator and this can be seen from Sharda, Satyam Scam
3. Mobile wallets initially were not under the definition of RBI and took a while before coming up with guidelines
4.Cyber fraud is rampant in India and regulators are finding it difficult to cover them

Clearly the response of regulators to “new issues” has been ad-hoc without a comprehensive framework. Besides regulators suffer from multivariate challenges-
1. Technology handicap
2. Skilled manpower and human resource training
3. Lack of co-ordination among other agencies
4. Anachronistic guidelines which do not meet demand of time

In this regard suggestion of FSLRC report by Justice BN Shrikrishna can be adopted which recommended formation of Unified Financial Agency by merger of IRDA, SEBI, FMC and PFRDA which will impart necessary teeth to tackle the new challenges of internet age.

3. Border management strategies should not only focus on strengthening the border protection forces but also on generating goodwill with the people residing in the border regions. Do you agree? Analyse in the context of India.

India has extremely complex borders. From Sir Creek to the Bay of Bengal, India’s land borders present a geographical diversity of a unique kind. Much of its borders are topographically difficult.

Challenges in border management are peculiar like; some stretches of border are porous and easily negotiable; some stretches of border are un-demarcated etc. Border is physically unguarded at many places due to terrain constraints and lack of approachability. Also, these border regions have their own ethnic, cultural, religious and racial configurations distinct from the mainland and in some areas depicting an unmistakable affinity with those of across the borders.

India’s neighbourhood is in turmoil. Several of India’s neighbours are undergoing political and economic instability. India also has continuing border disputes with several of its neighbours. Uncertain borders not only raise bilateral tensions but also facilitate cross border infiltration, illegal migration, smuggling and crime. Illegal migration has emerged as one of the major national security challenges.

Hence, considering the above aspects it is widely agreed that border management strategies should not only focus on strengthening the border protection forces but also on generating goodwill with the people residing in the border regions.

India’s territorial borders both land and sea suffers from diverse physical ethnic and cultural contradictions. While the state has a major role in securing the frontiers, local people living there, too can play an important role in securing our interests.

The local population suffers a lot in terms of causalities due to cross border fire, restriction on movement by forces, lack of employment and infrastructural facilities etc. The border guarding forces have to develop ways and means to involve local people in border management as they can be very helpful in

However , before their help can be taken it is necessary that their problems are addressed properly. They must not be harassed by draconian provisions of AFSPA which create a bad image of forces, they must be provided proper livelihood and employment opportunities and steps must be taken to generate good will amongst the local populations by forces.

Not only this, there should be proper channels of communication between the locals and forces. Forces should try to learn local language and try to create positive image among them. The problems of naxalism and insurgency could have been athing of past if tribals and villagers aspirations have been taken on board.

The Big Picture – FDI in E-Commerce – whom will it Benefit?