The Road to Safety

India’s roads have acquired a reputation, quite deservedly, of being the most dangerous in the world.

A report released recently by the Ministry of Road Transport says:

In absolute numbers, more people die in road accidents in India than in any other country. 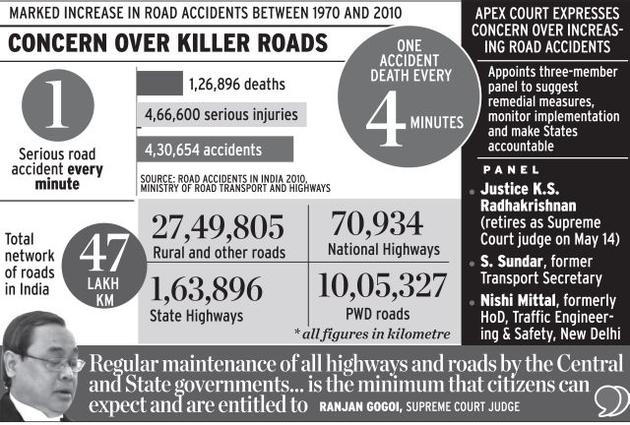 Road traffic accidents have the potential of being one of the largest challenges to orderly human existence necessitating immediate and urgent intervention.

Apart from the human dimension of the tragedy, avoidable death and disability seriously affect economic progress — by some estimates, 3 per cent of GDP is lost in a year due to the carnage.

Body responsible: The Ad Hoc Working Group on the Paris Agreement (APA)—will develop mechanisms and detailed steps for the implementation of the Paris deal—

Intended Nationally Determined Contributions (INDCs): Under the U.N. Framework Convention on Climate Change (UNFCCC), countries across the globe, committed to create a new international climate agreement by the conclusion of the Paris Climate Summit in December 2015, by publicly outlining the actions they intend to take, to counter climate change from their end

Discussions involved seeking a consensus upon:

(Can you think about other points of differences?)

Point of Contention between developed and developing countries:

All of these concerns would require further discussion and have to be resolved before COP-22 in Marrakech, Morocco

On a broader level, India needs to focus on—

The twin towers of terrorism

NOFN project yet to fulfil promise for rural India

A troubled time for the US-China relationship

What you see is far from what you get