India has gained global attention for its ambitious clean energy targets. India is now expected to play a major role in global energy transformation, by maintaining its own pledges, holding to account the developed world and thus, building global confidence.

India has become a frontrunner in energy transformation:

2) Mismatch between RE capacity and energy generated: 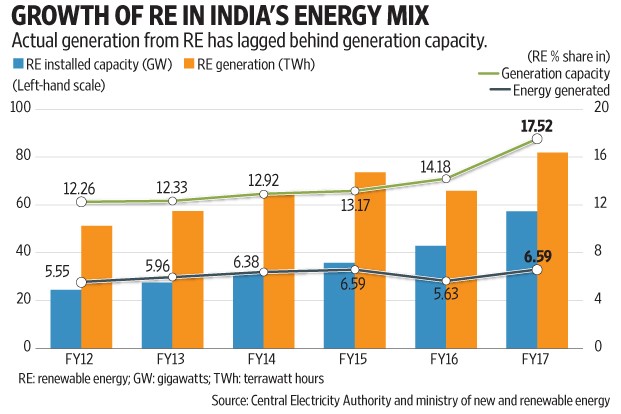 3) Focus on building a domestic reform coalition is inadequate:

4) Conventional power suppliers will be affected:

5) MNRE’s singular focus on solar energy in the renewables mission:

India is the fourth largest producer of wind energy in the world, with a total installed capacity of 27GW. Since wind power dominated the field of renewables for the longest time, the thrust for solar energy is understandable.

More takers of RE:

A high-level policy signal is in place, a political mandate is shaping up and implementing actors are coming up. To meet the global expectations, India needs much more proactive and creative actions.

With ambitious targets and policy incentives India is surely on its path of energy transformation. Globally moving towards renewable energy will help fight climate change while domestically it will help in energy security and economic development.

It is vital that India’s trade policy, while taking cognizance of GST’s nitty-gritties, also realigns domestic trade infrastructure with the altering global trade landscape. India’s commerce ministry is conducting a mid-year review of its trade policy to closely align it with the roll-out of the goods and services tax (GST) on 1 July. It might make more sense to re-anchor the policy in the shifting framework for global trade and the rapidly evolving nature of globalization.

3) Focusing on trade in services:

Recent developments are bound to reorder the global trade system. Therefore, it is imperative that India’s trade policy also realigns domestic trade infrastructure with the altering global trade landscape. It is also perhaps the perfect opportunity for the policy to be more of a strategy document rather than a manual.

The best times, the worst times

Waiting for reconciliation in Myanmar

Not worth the tax

Why India should set store its FTA with Europe

The Big Picture – Asia-Africa Growth Corridor- Can it be a game changer?