The government has recently released a national strategic plan for the elimination of malaria, and pledged to eradicate the vector-borne disease by 2027.

How bad the situation is when it comes to vector- borne diseases?

The NSP is a year-wise roadmap for malaria elimination across the country based on last year’s National Framework for Malaria Elimination. 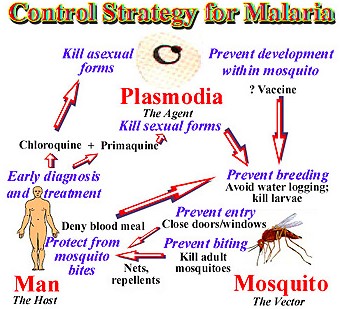 The NSP divides the country into four categories, from 0 to 3.

The plan is to eliminate malaria (zero indigenous cases) by 2022 in all Category 1 and 2 districts. The remaining districts are to be brought under a pre-elimination and elimination programme.

The NSP also aims to maintain a malaria-free status for areas where transmission has been interrupted. It seeks to achieve universal case detection and treatment services in endemic districts to ensure 100% diagnosis of all suspected cases, and full treatment of all confirmed cases.

Components of the plan:

The plan has four components, based on WHO recommendations: diagnosis and case management; surveillance and epidemic response; prevention — integrated vector management; ‘cross-cutting’ interventions, which include advocacy, communication, research and development, and other initiatives.

Salient features of the NSP : 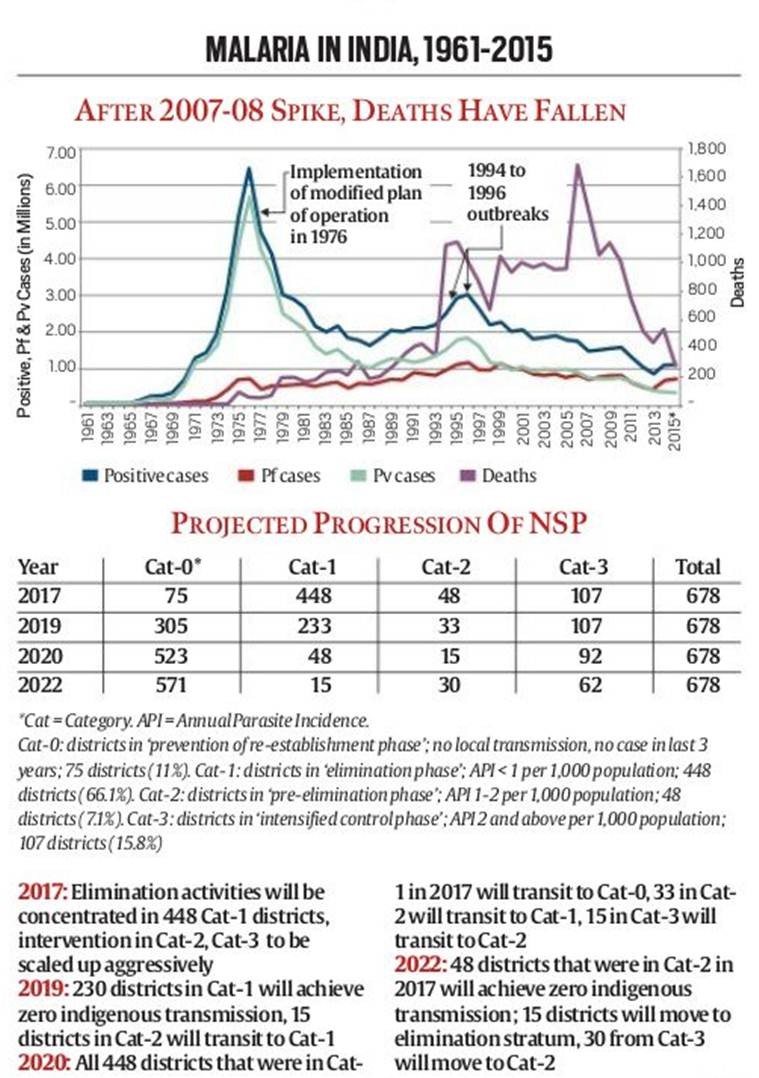 Fighting vector-borne diseases is not easy:

What has resulted into resurgence of vector-borne diseases:

While there are many different factors, local and global, that have contributed to the resurgence of each pathogen, two common factors that have impeded response strategies are:

In India the early success of the anti-malaria programme led to a certain amount of complacency. India’s relatively successful anti-malaria programme, “depended too much on the efficacy of DDT (dichloro-diphenyl-trichloroethane)” and assumed that “there would be no further need for entomologists in mosquito control work”—hence, researchers were moved to other tasks such as family planning, funds were diverted, and only a small field staff was engaged in DDT spraying. This was a huge mistake: When malaria and other vector-borne diseases resurfaced, India was found unprepared. These are some important lessons from the past that we must keep in mind.

For the first time, the Union Health Ministry has come up with a roadmap for elimination of malaria in the country. Before this, the effort was to “control” malaria under the National Vector Borne Disease Control Programme. Thus the plan needs to be implemented effectively if India is to translate its demographic dividend into an opportunity, as the more healthy Indian are, the healthier India will be.

They allege that their funds are frozen, intelligence reports were selectively released to paint NGOs in a poor light, and their activities are placed on a watch list (terming their activities as anti-national in some cases).

By the end of 2016, the Union Ministry of Home Affairs rejected the licence renewal applications of 25 non-governmental organisations (NGOs) under the Foreign Contribution (Regulation) Act, 2010 (FCRA), which means that these NGOs can  no longer receive funds from foreign donors.

As a result, NGO projects have been shut down, donors are unable to support work, and there is an overall atmosphere of State coercion and intimidation in the space of civil society.

NGOs and CSOs activities include – working for the poor and the marginalized, might involve questioning and protesting decisions taken by the government. There were instances where some CSOs and NGOs disagreeing certain government policies, for instance, opposing nuclear power plants, instances of campaigning to the right to food etc.

Civil society as the sphere of associational life forms the backbone of democracy. Apart from right to participate in elections, citizens have the right to scrutinise the work of their representatives, publicize acts of omission and commission, such as infringement of civil liberties, appropriation of tribal land for purposes of accumulation, failure of governments to provide a reasonable standard of life for the citizens, and engage with leaders on the troubled issue of political conflicts. The right to engage with, interrogate and criticise representatives is an integral part of democracy. Without this right, democracy becomes farcical, an empty term, a phantom concept, an illusion.

Democracy is ultimately not only about the rights of the people who vote representatives into power but also right to speak back to abuse of power. There has been too much emphasis on democracy as elections in India. The heat needs to be taken off elections. There is a need to be conscious of what happens between elections, given the opacity of government, given its awesome power over the lives and liberties of citizens, and given the propensity of every government to appropriate, accumulate and misuse power. This can be checked, provided we appreciate the competence of ordinary people to participate in political campaigns in civil society.

The focus on civil society dates back to the 1980s, when political scientists began to speak of a ‘crisis of representation’. Citizens across the world had shifted from older and traditional forms of representation, such as political parties and trade unions, to ‘newer’ modes: social movements, informal citizen groups and non-governmental organisations.

The worldwide shift to civil society was catalysed by the mobilisation of people against Stalinist states in Eastern and Central Europe in the 1970s and the 1980s. Citizens turned their back on unresponsive and authoritarian states and formed associations, such as reading clubs and soup kitchens, in a metaphorical space outside the state. This space they called civil society, a companion concept to democracy.

In India, by the late 1970s, the decline of all institutions gave rise to several mass-based political movements and grassroots activism. The anti-caste movement, the struggle for gender justice, the movement for civil liberties, for a sound environment, and against mega development projects that have displaced thousands of poor tribals and hill dwellers, the movement against child labour, for the right to information, for shelter, for primary education, and for food security have mobilised in civil society.

The fact that vital issues related to livelihoods, to the fulfilment of basic needs, and for justice were not taken up by political parties but by civil society organisations acted to propel hopes in civil society as an alternative to the non-performing state and an unresponsive party system.

In the first decade of the 21st century, civil society organisations stepped in to represent the interests of the most deprived and the most marginalised in the country. Mobilisation proved effective, and the enactment of social rights followed a number of civil society campaigns, the filing of Public Interest Litigations in the Supreme Court, and the onset of a new phase of judicial activism.

However, today, we see the marginalisation of civil society and the sidelining of a rights-based approach to social policy.

From 2004 to 2014, civil society organisations came together to press upon the government the right of citizens to social goods. Once laws granting the right to information, to food, and to work had been passed, activists kept watch on acts of omission and commission, and issued citizen reports.

Today, social security plans are announced without corresponding mobilisation of, consultation with or intervention of civil society organisations. On the contrary, the government has come down heavily on organisations by blocking their bank accounts, by putting a stop to funding, and by casting aspersions on their ability to represent the people of India. In many instances, non-governmental organisations such as Greenpeace have been projected as being anti-national.

Civil society and voluntary sector occupy a prominent place in the democratic landscape of India. Their contribution in helping the state reaching out to the poor and giving voice to the common citizens can’t be overstated. However, rule of law must govern their functioning in matters of financing and objectives.

The big squeeze on civil society

Bits and pieces of trade with Israel

A gift of words and silence

Time to focus on more crop per drop