In February, the National Pharmaceutical Pricing Authority slashed prices of stents by up to 85 per cent. 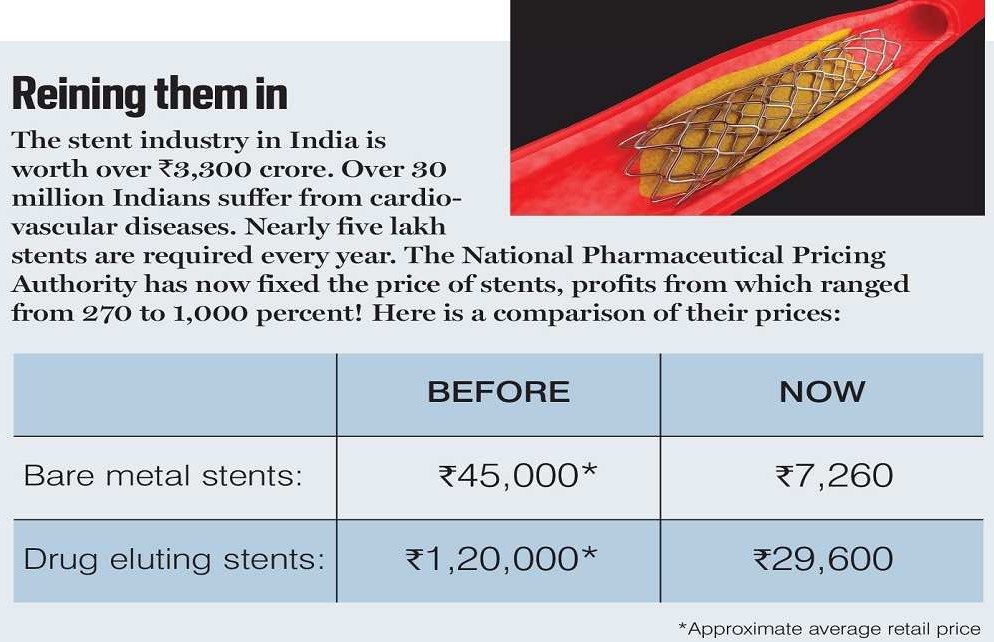 A coronary stent is a tube-shaped device placed in the arteries that supply blood to the heart. It keeps the arteries open in the treatment of coronary heart diseases.  The devices save thousands of lives globally, every year. Emergency angioplasty is the treatment of choice during an acute heart attack, wherein the clot is crushed with a balloon and a stent is placed. It improves the chance of the patient surviving by almost 30 per cent when compared to clot dissolving medication (thrombolysis).

The need for price control:

In India, emergency angioplasty was carried out in less than 10 per cent of patients mainly because of the cost involved in the procedure and the lack of access to stents.

Bringing the devices under price control will enable more patients to make use of this life-saving procedure.

Capping the prices of stents has had an unexpected outcome-

While the government must ensure that the common man has access to proper healthcare, it also cannot undercut market dynamics entirely. If companies do not have the resources to invest in research and innovation, it is ultimately the public that will suffer.

Price control of stents is a positive step, but more needs to be done. It should be seen as an opportunity to shore up healthcare infrastructure in country. The government needs to see that the domestic stent manufacturing industry is unhurt and rather competes with international market. Once such a level of competency is achieved, India could actually export stents making Prime Minister’s Make in India viable for medical devices.

In news:
The Supreme Court has recently made preliminary observations regarding privacy as a fundamental right.
It is no longer possible to decouple the idea of privacy from the mechanisms through which privacy is guaranteed. Since Aadhaar and many of the contemporary discussions on privacy are related to deep technological developments, the question of privacy should be rethought in the context of these technologies.

Privacy as a way of protecting individuals or groups:

We believe that our bank balance must be private. Companies do not normally make public the salaries of all their employees. Universities do not make public the marks or grades of their students in a way that violates the privacy of the student.

These notions of privacy are based on the need for security and protection. We do not want to divulge certain things about our wealth or life practices since they may be used by others to potentially harm us.

The state and private players:

The government has begun to look more and more like the private sector. Today, almost all politicians are rich entrepreneurs and hold powerful business interests. The public-private binary does not function in any useful sense as far as the governing class is concerned.

Thus, privacy is not only open to manipulation by the government but even more so by the private sector. This is so especially because it is the private sector that is at the forefront of developing technologies that facilitate this mining, storing and sharing of information.

Contemporary technology has made possible many new innovations that have changed the very meaning and significance of privacy. From smartphones to the darknet, the fundamental trajectory is one to do with privacy.

Some might argue that technology is only an intermediary tool that enables certain things, both good and bad. But to hold this view is to be blind to the changing modes of technological domination through digital and Internet technologies. Technology is no longer outside human and social processes; it co-creates and co-constitutes the human and the social

Questions that needs to be answered:

It also stems from an indifference to our own privacy. We do not seem to value privacy today as in earlier times. Social experiments have shown that people are willing to have private information about themselves made public if they receive some monetary advantage.

We do this all the time. When we search for a book or a ticket, we start getting advertisements related to these searches in our supposedly private emails. What we read, search, buy, talk and perhaps even think get stored, used and circulated. Everything is tracked and rerouted. We have no clue to the amount of information about our private lives that is out in the Web.

Privacy is not a concept like the other fundamental rights. Moreover, our notions of privacy have changed and will continue to change. Technology has been one major catalyst for this change. Any judgement on making or not making privacy a fundamental right must be taken keeping these nuances in mind.

Why are there so few women mathematicians?

Why India needs to be data democracy?