Solving the problem of pulses in India

Pulses are an interesting and unique commodity group in the Indian agri-food space. The country ranks first not only in their production and consumption, but also their import. Domestic absorption in recent years (2012-13 to 2015-16) has hovered between 21 million metric tonnes (MMT) and 23 MMT, while domestic production has ranged from 16.4 MMT to 19.3 MMT.

In 2016-17, India witnessed its highest ever domestic production of pulses — a staggering 22.95 MMT.  The production of kharif pulses increased by nearly 70 per cent in 2016-2017 over that of the previous year and the total production of pulses increased by about 40 per cent.
Normally, in a year of such bumper production, imports would be expected to fall significantly and one would assume India to have become self-sufficient in pulses.
However, the reality was very different. India imported a record 6.6 MMT of pulses, valued at nearly $4.3 billion at zero import duty. As a result, domestic supply of pulses in 2016-17 shot up to 29.6 MMT, way above the typical supply of 22-23 MMT. The glut in domestic supplies caused wholesale prices to crash, despite a bold and first-of-its-kind effort by the government to procure around 1.6 MMT of pulses.
The MSP price did not even cover the projected cost of production, Rs 5,700 per quintal. 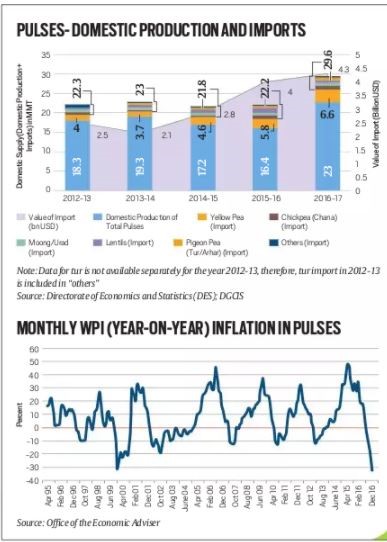 Solution to the problem:

As things are, we may either witness a decline in production of kharif pulses or another price crash in following years. That may spur another round of farm loan waivers.  The pulse problem thus needs to be solved. With the above mentioned policy changes, and a fairly reasonable buffer stock in place, the government can surely manage the pulses sector better.

Pulses are an interesting and unique commodity group in the Indian agri-food space. The country ranks first not only in their production and consumption, but also, their import.  Discuss the reasons behind lack of self-sufficiency when it come to pulses and what should be the solution to the problem.

Solving the Rohingya issue at the regional level

Myanmar is witnessing a brutal episode of violence since August 25, 2017 between Rohingya Muslims and Rakhine Buddhists (who reportedly enjoy support from the Myanmar state too). Some 2600 houses have allegedly been burnt, more than 100,000 Rohingyas have been forced to flee to neighbouring Bangladesh and approximately 1000 lives have been lost. Given the scale of death and destruction in such a short span of time, this latest phase of internal violence can easily be termed as the most horrifying in Myanmar’s recent history.

Implications for the Region:

Apart from impinging upon Myanmar’s internal security, the Rohingya crisis is also posing a security challenge to the South and Southeast Asia.
The IS, in some of its public messages has stated its concern over the repression of the minority Rohingyas by the majority Burman-led governments. Suspicions persist about linkages between the two groups.

Bangladesh’s Border Guards meanwhile are not permitting fleeing Rohingyas to enter the country, leaving hundreds of refugees stranded in the border areas. Bangladesh has received the most number of refugees in the recent crisis primarily for two reasons. First, geography makes it easier for Rohingyas to cross the border into Bangladesh. And second, Rohingya Muslims are culturally and ethnically closer to the people of Bangladesh, given that they are descendants of Bengali-Muslims from the Chittagong area who had migrated to present-day Myanmar during the British Raj.

Kiren Rijiju, the Union Minister of State for Home Affairs, has stated that India needs to deport those Rohingyas who are illegally staying in India.
India’s tough stand on deporting Rohingyas back to Rakhine State in the midst of the ongoing violence has evoked criticism from national and international human rights activists.
The India-Myanmar Joint Statement, released when Prime Minister Modi visited Nay Pyi Taw, noted that the situation in Rakhine State has a ‘developmental as well as a security dimension’.  India will help Myanmar under the Rakhine State Development Programme and both sides are expected to finalise the implementation plan of this programme in the coming months. It will cover infrastructure development and socio-economic projects, especially in the areas of education, health, agriculture, agro-processing, community development, construction of roads and bridges, protection of environment and so on.
The Joint Statement, however, has no specific mention about the recent clashes between the Rohingya Muslims and Rakhine Buddhists or exodus of the Rohingyas from Myanmar or India’s plan about deportation of some 40,000 Rohingya refugees who are reportedly staying in India.

The economic burden emanating from the huge refugee influx, the growing fear of linkages between the Rohingyas and the IS, coupled with the apathy of the countries of the region towards the problem, explains the stance of the ASEAN countries in advocating a domestic solution to the crisis.

The statelessness of the Rohingyas and the lack of empathy towards the plight of the Rohingyas have contributed to the adoption of extremist methods by them. If not addressed pragmatically, the Rohingya crisis will only cause more violence, leading to more refugees and chronic instability in the region. The regional leaders especially India must come to a solution to the regional problem.

The Rohingya Muslims issue is a regional one and must be solved at regional level. Discuss.

The disaster next door

States should spend more on nutrition

BRICS- From a big bang to a whimper

Nutrition is vital to Tb treatment