A new industrial policy is being framed by the government.

By 2009, Chinese capital goods’ production capacity was about 50 times as large as India’s and India was importing machinery, power generation equipment, and other capital goods in increasing quantities from China.
India’s industrial sector had become much smaller than China’s and lost its depth too.

The process of a country’s industrialization is a process of enterprises in that country acquiring capabilities to produce more complex products that they could not produce before. 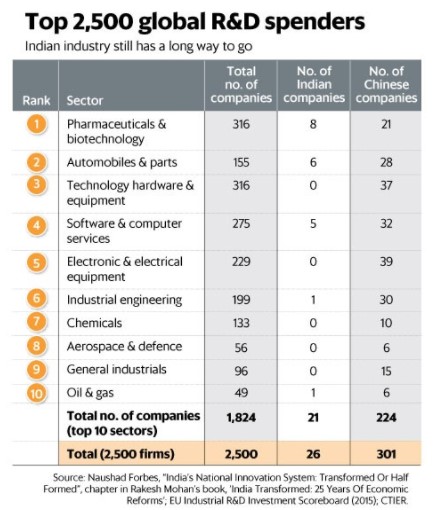 This will need to be addressed by the new industrial policy, else it risks remaining a structural headwind that will continue to weigh on India’s productivity growth going forward.

It has been one year since the special forces of the Indian Army carried out surgical strikes to destroy terror launchpads in Pakistan-occupied Kashmir on September 29, 2016.
It is important to take stock at this point on how India-Pakistan bilateral relations and the regional security situation have evolved over the past year since the strikes.

There are two sets of challenges that are more apparent today, one year after the surgical strikes.

The Central government argues that surgical strikes have been a spectacular success.
Has surgical strikes improved our national security in plain practical terms. The first obvious question to ask is whether the strategy of punishment has worked vis-à-vis Pakistan.

There are two reasons why the strategy of punishment may not have worked. For one,

This has led to a visible lack of credibility on New Delhi’s part which makes one wonder whether, bereft of domestic political uses, there was any strategic planning behind the September operation.

By all accounts, India’s national security environment is fraught today.

Surgical strikes may have been a tactical victory for New Delhi, but its strategic value is far from settled.

With two hostile neighbours on either side, terror attacks against India on the rise, and the South Asian neighbourhood unsure of India’s leadership any more, New Delhi has a lot to be concerned about the continuation of its pivotal position in the region and the nature of its future engagement with it.
The events since September last year have further contributed to South Asia’s regional ‘insecurity complex’.
For a country that has traditionally been the regional stabiliser, New Delhi must avoid aggression and self-imposed regional exclusion.

·         A year after the surgical strikes across the Line of Control, India must recover its role as a regional stabiliser. Critically analyze.

Waiting for a signal

A new foray into the great game

Case for a fiscal push

In defence of manufacturing

A crisis is building up in India’s real estate sector