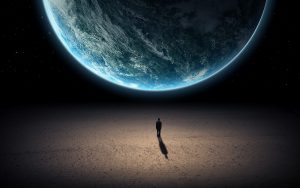 Man is not just a part of nature; he is an extension of nature. It is nature’s desire to think, move and talk that manifests as a human being. We did not drop from heaven to inhabit the earth; we arose from the womb of the earth as a joyful expression of life.

Man’s utter disregard and disrespect for nature is probably his single biggest downfall. He has already changed the landscape of earth more than required. Every single day he is contributing to change the natural balance of the planet. It is not the need of man that is destroying the planet; it is his greed.

If we consider the rate at which we are cutting down the trees and the rate at which the human population is growing; it is not very difficult to imagine a day when just living on earth will prove to be a challenge. The single biggest cause of concern for the future is over population and dwindling of resources as a result of it.

There is always a natural balance of animals and plants in nature. Nature knows how to control the population of trees using animals and it knows how to control the population of animals using other animals. This balance is vital for a living ecosystem to function. Man has gone far beyond the clutches of this system.  Now, if he doesn’t decide to change his ways, nature will not be able to change it.

All it takes to change our ways is a little bit of intelligence. We have to see that we are drilling holes in the boat we are travelling in. If we don’t stop doing this, soon we will drown. Man’s intelligence is his gift and curse. At this point in time in history, he is using his intelligence to fuel his greed and destroying the planet.

This is not to suggest that the only thing man can do now is go back to living in the forest. Acting responsibly by keeping the needs of the present and the future generations in mind is what is needed. Every single decision of his should take plants, animals, nature and existence around him into consideration. He has to make only necessary changes for survival and leave the rest for nature to handle.

The time has come for man to see a newer and fresher imagine of humanity on this plant. He has the power to reimagine his view of the future; he has always had this power. Thomas L Friedman in his book ‘Hot Flat and Crowded’ says ‘The stone age did not end because we ran out of stones’. It ended because we found better alternatives.

Man is now at the precipice of a new tomorrow. He has to start searching for new alternatives to fuel his dreams and imaginations. If progress and movement is what separates man from all other animals; if moving is his obsession, then he has to move in a way that is sustainable and manageable. The only hope for the future of humanity is re looking at our place on earth.