All India Radio (AIR) : GST- A Milestone in Economic Reforms

GST- A Milestone in Economic Reforms

With the historical mid night launch of goods and services tax by President and PM of India, the tax reform is the new reality. It is a bold reform as after this, the way the business is done in india will change. The reform will affect each and every stakeholder-consumer, transporter,

manufacturers, service providers. There would be initial irritation but it is expected to settle down quickly.

PM said that people will remember GST as good and simple tax. GST subsumes number of indirect taxes and cesses. To this extent, the businessman had to deal with different tax authorities, had to fill different forms, had to maintain different books of accounts for different taxes. Now there will be only one record and also file a simple return for all taxes together. This is simple tax.

It has capacity to allow seamless flow of input credit. At every stage, the person will be only paying the tax on the value that he is adding. There will not be any cascading of taxes which will ultimately benefit the consumer and India’s goods will become more competitive internationally which will attract more foreign direct investments in India. This will give fillip to economic growth and in turn give rise to employment.

There is an apprehension that some commodities and certain items will have to face price rise. In the initial process of fixing the taxes or putting goods into different tax slabs, care has been taken that slabs in which the goods are fixed are almost comparable to what is the present incidence of tax. Tax on manufacturing= excise duty. Then there was VAT and other intermediate taxes such as inter goods state tax (CST) which had concept of cascading. So now the GST was calculated based on summation of the present tax on each goods. Each goods was deliberated in the GST Council and then fixed into particular slab.

The effort in bringing out GST had coordination between Team India (centre and state representatives), officials who had calculated the rates and had decided the rates. Council has taken consideration into the weaker sections, for common man and care has been taken that goods of mass consumption for weaker and poor sections are kept in slab of 0% or 5% and the goods of mass consumption used by middle class is in 12%. Essentially most of the goods fall into these brackets. Thus it might not be inflationary.

There are few luxury goods in 28%. In those goods also, the present incidence of tax is much higher than it.

Suppose there is price rise in one segment and people working in that segment are exploiting GST and raising prices of their commodities, then there is an anti-profiteering law (sec 171) under the GST ambit which might pose a challenge for those resorting to unnatural high prices. This section says that if there is input tax credit and the rates have been reduced, the benefit should be passed to consumer.

In the realty sector, together with RERA, GST will go a long way in ensuring transparency and heightened buyer confidence. The existing channels include multiple taxation issues, which lead to challenges around indirect taxes, and lack of uniformity. Now, standard rate of 12% GST will free home buyers and investors from the hassle of paying several state taxes at different levels, removing the double taxation impact.

The $2.4-trillion economy is making a bold attempt to transform itself by removing internal tariff barriers. It is expected to

India is a diverse country with different segments of people and all segments have to be taken care of. There cannot be same rate for footwear and luxury car.  So there cannot be one tax rate for all goods. Yet, such has been the structure that GST council can reduce GST rates whenever it wants.

For consumer education for which concentrated attempt is being made and lot of publicity is done through media-social, print, electronic. The government is trying to convey to the public how the rates have come own post GST. The initial few weeks and months would be adjusting period. Also, there is handholding in GST where all the ministries have dedicated GST helpdesk.

Thus, India is geared for strong growth going forward. In the long run, GST could potentially add 1.5-2 percent to the GDP and there might be a double digit growth in the economy for a sustained period of time. 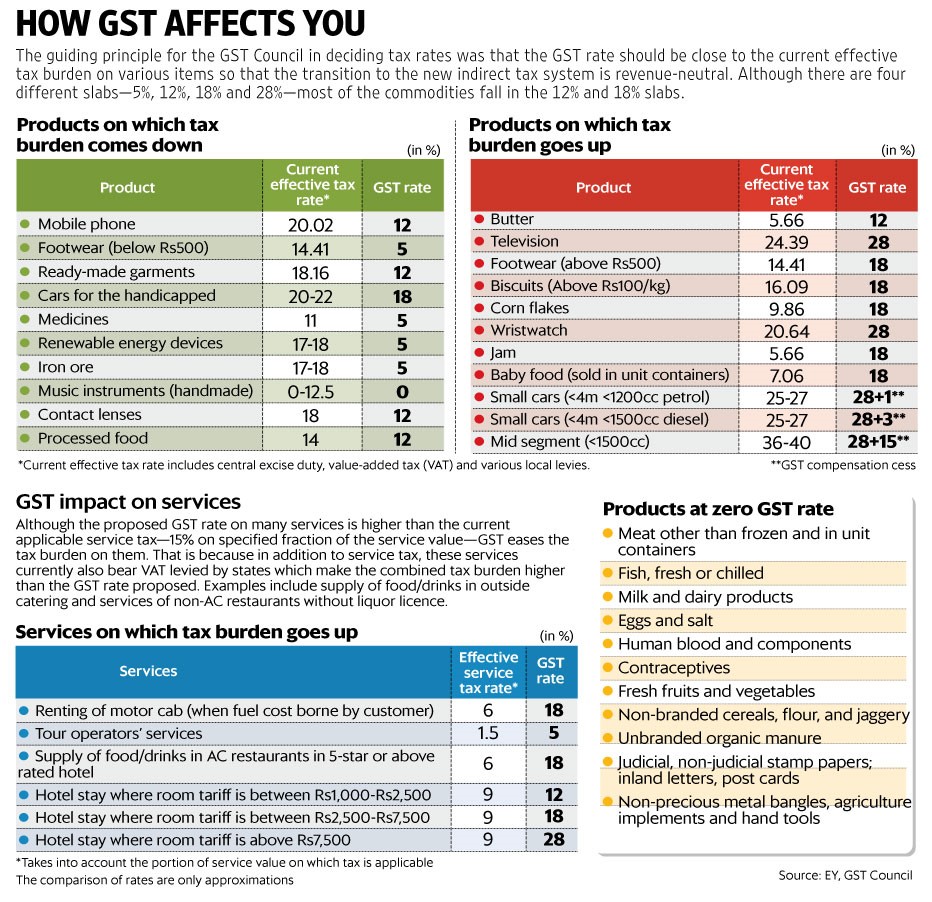