1. What effect would foehn-type winds have on farming, forestry and ski-resorts? Discuss.

Foehn wind is a warm, dry and down-slope wind occurring on the leeward side of a mountain as a result of the adiabatic warming of the air descending after precipitating on the windward slope of the mountain. 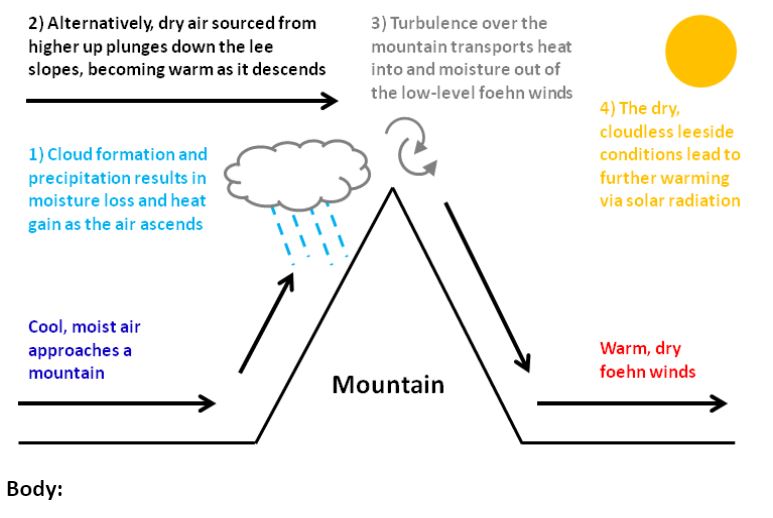 The foehn-type winds are found across all continents and are known by their regional names like Khamsin in Middle east, Nor’wester in New Zealand and foehn in Europe. Its effects can be both favorable and unfavorable, depending upon the prevalent climate of the region.

Q2. Where are the major warm and cool ocean currents located in respect to Earth’s continents? Which currents have the greatest effects on North America?

Cold currents: These are usually found on the west coast of the continents in the low and middle latitudes (true in both hemispheres) and on the east coast in the higher latitudes in the Northern hemisphere. Some of the major cold currents are: 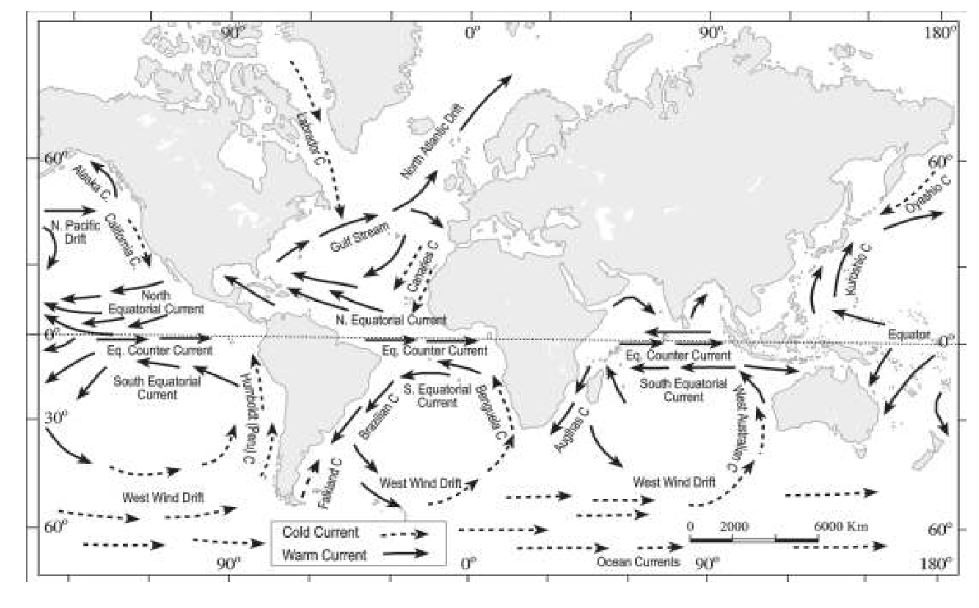 The ocean currents having the greatest effects on North America are:

The mixing of both the cold and warm currents leads to replenishing of plankton at the surface waters off Newfoundland coast resulting in one of the world’s best fishing grounds and foggy conditions as well.

Gulf Stream helps in keeping the ports ice free to a certain extent and augments precipitation as well.

Helps in keeping the ports along the western coast ice free, due to warming effect.

Due to desiccating effect, results in the dryness along the western California region I.e., Mojave Desert.

Thus, apart from balancing the thermal distribution over the latitudes, ocean currents play a very critical role in shaping the climate of region and affecting social and economic life of people.

3. How does the formation of the Hawaiian Islands support plate tectonics theory? Discuss.

Plate Tectonic refers to a theory which states that the Earth’s crust is divided into many mobile plates which float over the asthenosphere. The theory has been put forth to explain the creation and destruction of landforms across the globe.

According to the theory, the plates are in constant mobility at very slow pace. The presence of fold mountains, oceanic ridges have been considered as the testimonial for this theory. The structure and formation of Hawaiian Islands itself is considered to be an evidence of plate tectonic theory.

The Hawaiian Islands are an archipelago of eight major islands, several atolls in the North Pacific Ocean. The islands are spread out from South Eastern to North Western direction. 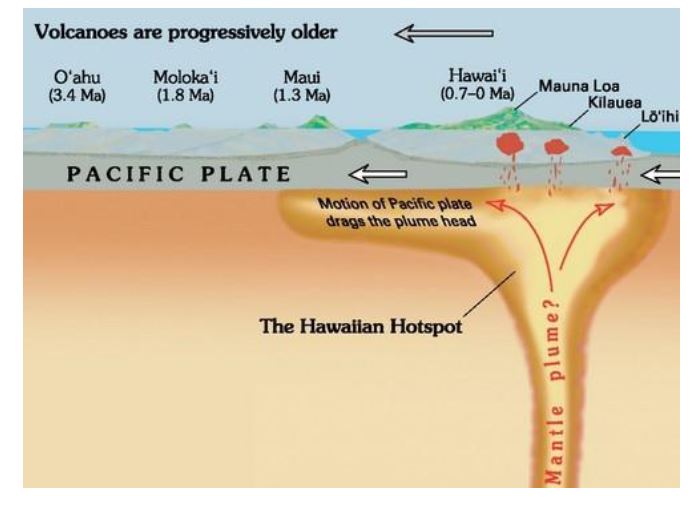 The Islands have been formed due to hotspot volcanism. Hotspot vulcanism occurs when the unusually hot magma flows towards the surface of the lithosphere. Due to its high temperature, it creates pressure on the plate, which ultimately cracks leading to volcanic eruption. This process leads to the formation of volcanic mountains, which can under sustained pressure rise to great heights. A similar process occurred in the Pacific plate and led to the formation of Hawaiian Islands. 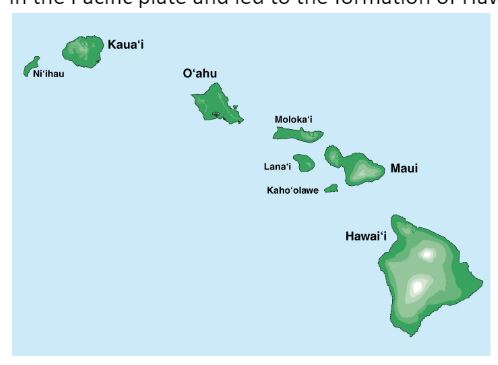 But as the above image shows the Hawaii is in the form of string of islands. Their age is gradually increasing from south eastern direction. Given the fact that, the region of hotspot remains constant, the only way such string of islands would have been formed is due to the movement of the plate above. This certifies the fact the Pacific plate has been moving and in the North Western direction.

Thus, the genesis, direction and age of the Hawaiian Islands prove that they were formed while the Pacific plate was moving. This movement confirms the plate tectonic theory which is central to many geological observations.

4. What recommendations would you make as far as land use and settlement patterns are concerned to lessen the danger from tectonic hazards? Discuss.

Apart from above awareness among local population, early hazard warning systems etc can help handle the hazard by decreasing the vulnerability.

Disaster risk reduction (DRR) is an integral part of social and economic development. And from above it can be concluded that land use planing is potentially powerful mitigation tool in case of natural hazards.

5) What would you recommend as a solution to prevent the loss of valuable historical monuments to weathering process? Discuss.

India is an old country, and is fortunate in having the remains of large numbers of buildings that, considered together, provide us with the most tangible and illuminating insights into our past. Most of these buildings are structurally complete and remain in use, even if they have had to be periodically modified to meet changed requirements.

If we ever inspected a crumbling gravestone or once-engraved stone pillar now worn smooth, we can see what weathering can do to even the strongest materials. This weathering occurs on a larger scale as well, affecting some of the world’s most famous monuments. Without human intervention, weathering reclaims monuments, wearing them down to scraps of rock and soil over time. Protecting stone monuments requires on-going preservation efforts, leaving man in constant battle with Mother Nature.

Different types of weathering can be seen:

After surveying by the geologists of natural and man-made damage, including explosions and partial demolition, researchers are suggesting that the monuments may be undergoing continuous damage due to environmental pollution. There is evidence that air pollution has caused substantial harm to monuments of many parts of the world. For e.g. Taj Mahal 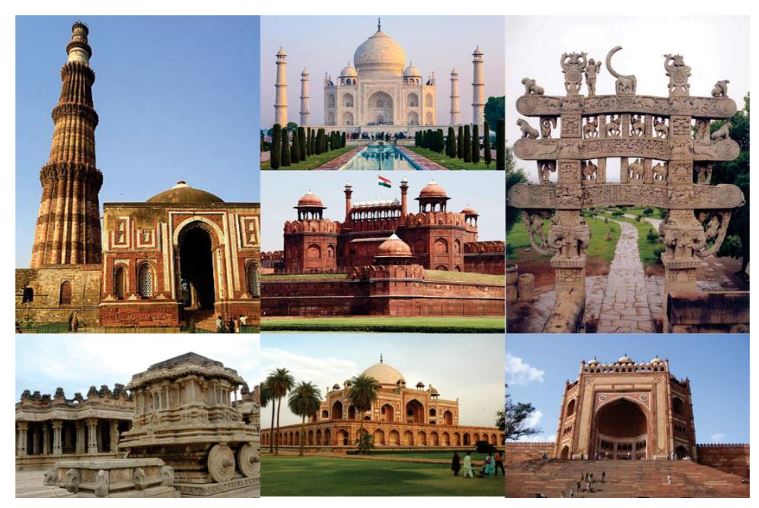 Solution to prevent the loss of valuable historical monuments:

The biggest concern of many preservationists is that despite accelerated weathering tests, the long-term effects of consolidants in the real environment are hard to predict. And one of the most promising developments of stone preservation today was that advanced tests were increasingly being brought to bear on stone that has been consolidated and then weathered.