1. What kind of plant and animal life can survive in the polar climates? What special adaptations must this life make to the harsh conditions of this region? Discuss.

Polar climates are characterized by temperature lower than the freezing point, negligible insolation, scarce precipitation and strong winds. It is these extreme conditions that make survival of flora and fauna challenging in these areas.

Animals: Large animals like polar bears, wolves, foxes and reindeers are found here. Among invertebrates, mites, ticks, flies and mosquitoes are found. Coastal birds as well as marine mammals are also a feature of the Polar Regions.

Adaption has enabled for survival of flora and fauna in such extreme climatic conditions. Polar climates are present in both Arctic and Antarctic regions but due to isolation from rest of the land, Antarctic region has far less number of species than Arctic.

2. The highest concentration of marine life is found in which parts of the ocean? Why?

Eg: Regions of coral reefs which in turn are home to many different species

Eg: Grand Banks of Newfoundland, The cold Labrador Current mixes with the warm waters of the Gulf Stream here. Best fishing grounds of the world

Reasons: The nutrient-rich upwelled water stimulates the growth and reproduction of primary producers such as phytoplankton

Climate change and pollution due to high human intervention in the oceans has been the reason for changing balance of ecosystem and biodiversity in the oceans.

3. What would be the major changes in the world’s coastal zones if sea level were to rise? Discuss.

Between 1993 and 2010, sea levels rose by 3.2 mm per year, the fifth Assessment Report of IPCC projects more and faster sea level rise by the end of the 21st century. With 20% of the world’s population living within 30 km of the coast, rapid sea level rise can have large scale ramifications.

Current century is facing the fastest rise in the sea level. One of the first zones that will be hit by this rise would be the coastal zones. Considering that coastal zones have been a hotbed of civilizations across the globe, the changes that it will witness would have severe impact. These impacts can be seen as below.

The changes that coastal zone would witness would be irreversible.  Thus, steps like Paris Climate Change Accord, Sustainable Development Goals have to be mainstreamed across the globe. The successful implementation of such steps would decide the future of many people depending on the coastal regions.

4. Describe where most of the world’s coral reefs are located. Give examples of islands or island groups that have coral reefs. What dangers does climate change pose for reefs? Discuss.

Coral reefs are diverse underwater ecosystems held together by calcium carbonate structures secreted by corals. Coral reefs are built by colonies of tiny animals found in marine water that contain few nutrients. They are rightly regarded as rainforest of the ocean.

Location of most of the world’s coral reefs:

Coral reefs are found in all three of the Earth’s oceans that have portions in the tropics – the Atlantic, Pacific and Indian.

The global distribution of coral reefs is largely determined by the ecological requirements of the reef-building corals themselves.

Thus, the coral reefs are mainly concentrated towards the western margins of the tropical oceans. 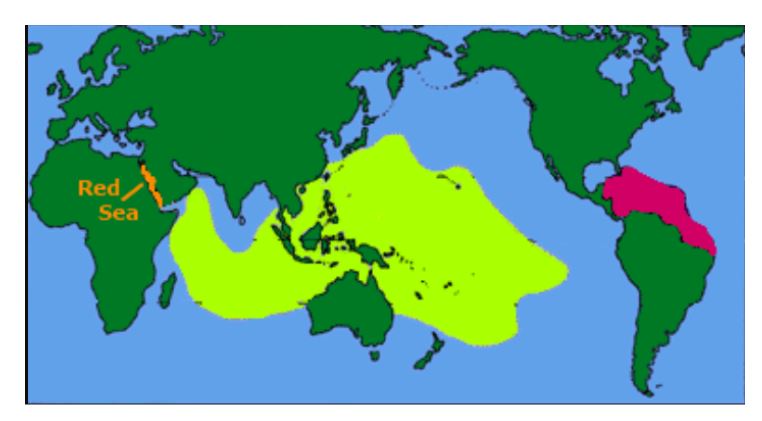 Coral reefs are important as they contain the most diverse ecosystems on the planet. They protect coastlines from the damaging effects of wave action and tropical storms and provide habitats and shelter for many marine organisms. Given climate change is the greatest global threat to coral reef ecosystems, efforts should be taken to tackle GHG emissions, strict implementation of INDCs, check on anthropogenic activities like oil spillage etc.

5. Scientists consider the oceans to be Earth’s last true frontier and a great resource base for the future. Why? In this light, examine the significance of blue water economy.

Despite the fact that the ocean plays a role in everything from the air we breathe to daily weather and climate patterns, we know very little about our ocean. And, most of our knowledge of the ocean lies in shallower waters. Deeper waters remain a mystery even though we are relying more and more on these areas for food, energy, and other resources. Enter ocean exploration.

Ocean’s as a great resource base for the future:

Significance of blue water economy, in case of India:

India can profitably integrate its on-going programmes like Make in India, smart cities, skill development and self-reliance in defence and operationalize the blue economy. And the international rules and norms for ‘Blue Economy’ or ‘Blue-Water Economy’ are still evolving and are being actively considered in various multilateral forums at regional and global levels. Through proactive diplomatic engagement in these forums countries aim to protect and enhance their economic and strategic interests in the maritime arena.