In News: The Supreme Court has fixed a February-end deadline for the search committee on Lokpal to recommend a panel of names for appointment of the country’s first anti-graft ombudsman.

Why in News: The court was hearing a contempt petition filed by NGO Common Cause against the government for delaying the appointment of the Lokpal. Appearing for the NGO, advocate Prashant Bhushan raised doubts on the working of the search committee. Bhushan complained that the working of the committee lacked transparency and the panel must make public the shortlisted names.

Amid repeated demands for such an ombudsman, many attempts were made at legislation, with Lokpal Bills introduced in 1971, 1977, 1985, 1989, 1996, 1998, 2001, 2005 and 2008, but none of these was passed. It was four decades after the introduction of the first Bill that the Lokpal and Lokayuktas Act was enacted in December 2013. This was the fallout of a public movement for a Jan Lokpal Bill, initiated by activist Anna Hazare and others such as Kiran Bedi and Arvind Kejriwal. Under pressure at a time when it was facing several allegations of corruption, the then UPA government brought the Bill and it was passed after several hurdles. 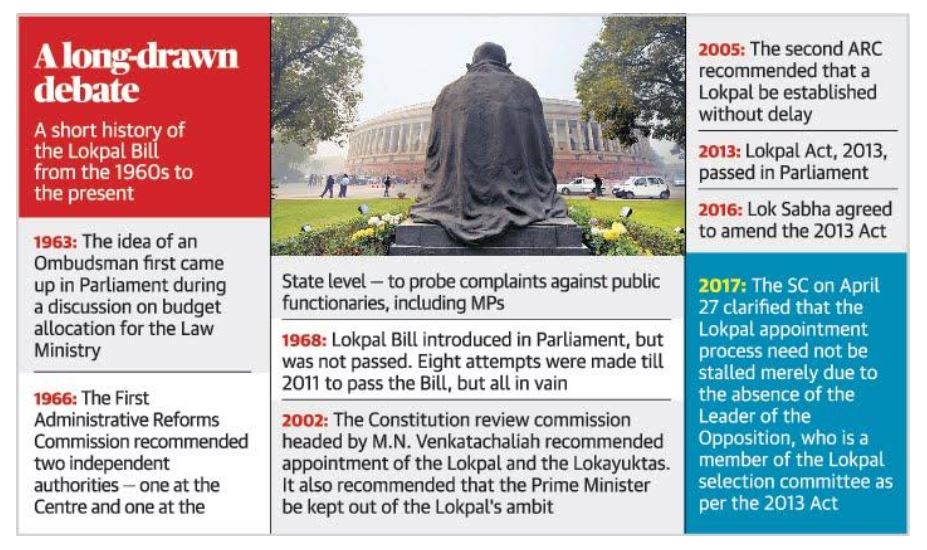 The Lokpal and Lokayuktas Act, 2013 provides for establishing a body to be called the Lokpal and headed by a Chairperson:

Of its other members, not exceeding eight, 50% are to be judicial members, provided that not less than 50% of the members belong to the Scheduled Castess, Scheduled Tribes, OBCs, minorities, and women.

For states, the Act says: “Every State shall establish a body to be known as the Lokayukta for the State, if not so established, constituted or appointed, by a law made by the State Legislature, to deal with complaints relating to corruption against certain public functionaries, within a period of one year from the date of commencement of this Act.”

The Lokpal Act covers a wide range of public servants — from the Prime Minister, ministers and MP, to groups A, B, C and D officers of the central government.

When it comes to the Prime Minister: Lokpal shall inquire or cause an inquiry to be conducted into any matter involved in, or arising from, or connected with, any allegation of corruption made in a complaint” in respect of the Prime Minister.

The next step: Once the search committee submits its recommendation for the Lokpal and its members, a selection committee will consider those names and forward them to the President for his consideration.