In News: Recently, it was observed that the Earth’s north magnetic pole had been exhibiting strange behavior and quickly moving away from Canada, even crossing the International Date Line last year. As of now, this pole has been redefined by the World Magnetic Model because of its rapid movement. This extreme wandering has caused increasing concerns over navigation, especially at high latitudes.

Earth’s magnetic field surrounds and protects our planet from the hottest, most statically charged particles that the sun can throw our way. This shield — the natural product of molten iron swirling around the planet’s core – has had our backs for billions of years and has prevented Earth from becoming an irradiated, electrified wasteland.

The World Magnetic Model records those changes. The model is a joint product of the British Geological Survey and the United States National Oceanic and Atmospheric Administration. The two agencies were planning to report changes in the magnetic north pole, as they do every five years, at the end of 2019. But the pole has moved so quickly they had to release the information much sooner.

Scientists have found that the magnetic north pole is moving at a speed of about 55 kilometres every year. One hundred years ago, the pole was located near the coast of northern Canada. It crossed the International Date Line, the imaginary line running through the Pacific Ocean from the North Pole to the South Pole, in 2017. Now, the magnetic north pole is in the middle of the Arctic Ocean and moving towards Russia. 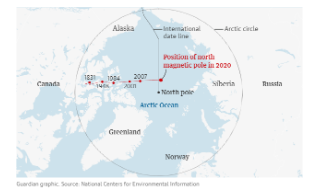 Why could this phenomenon be occurring?

Researchers have suggested that it may be because of the deeply embedded hydromagnetic waves, the movement of liquid iron in the Earth’s core, climate change, or a combination of all these factors.

The Earth’s physical structure is behind all this magnetic shifting. The planet’s inner core is made of solid iron. But the reason is turbulence in Earth’s liquid outer core. There is a hot liquid ocean of iron and nickel in the planet’s core where the motion generates an electric field.

The Earth itself spins on its axis. The inner core spins as well, and it spins at a different rate than the outer core. This creates a dynamo effect, or convections and currents within the core. This is what creates the Earth’s magnetic field — it’s like a giant electromagnet.

Exactly how the dynamo effect changes the field isn’t widely understood. Shifts in the core’s rate of spin and the currents within the molten material most likely affect the planet’s field and the location of the poles. In other words, the poles move because the convection in the core changes. These changes might also cause the poles to switch places. Irregularities where the core and mantle meet and changes to the Earth’s crust, like large earthquakes, can also change the magnetic field.

Is Earth’s Magnetic Field About to Flip?

While the rapid movement of Earth’s magnetic North Pole may cause concern over the potential flip of magnetic poles, there is no evidence that such a flip is imminent. Geologists can interpret magnetic minerals in rocks around the world to reveal the history of magnetic reversals on Earth.

Earth’s magnetic poles have flipped many times in its history, with the latest reversal occurring 780,000 years ago and 183 times in the past 83 million years. When Earth’s magnetic poles do flip, it won’t be a catastrophic “end of the world” scenario. From examining fossil records, there is no evidence that a magnetic field reversal causes increased extinctions, volcanic activity, etc.

The magnetic North Pole is responsible for more than just the direction a compass points. It’s also the source of the aurora borealis, the dramatic lights that appear when solar radiation bounces off the Earth’s magnetic field. This happens at the South Pole as well. In the southern hemisphere, the lights are called the aurora australas.