The data isn’t comparable with that of past years, the government contended, in effect seeking to refute previous leaked reports that said they showed the unemployment rate was at a 45-year high.

These three conditions, taken together, suggest that part of India’s unemployment challenge lies in its success in expanding education while not expanding formal sector jobs. 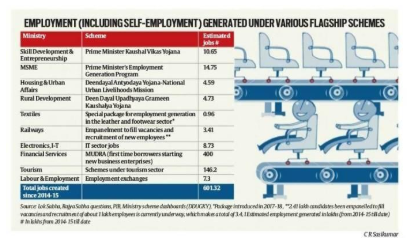 As the domestic labour market is becoming increasingly sensitive to national and global economic factors, policymakers felt the need to construct labour statistics at more frequent intervals. To fulfil this objective, the Periodic Labour Force Survey (PLFS) was initiated by the NSSO beginning April 2017. This initiative followed the recommendations of the Task Force on Improving Employment Data. The PLFS is a continuous survey for generating estimates of labour force indicators on a quarterly basis for urban areas and on an annual basis for both rural and urban areas. 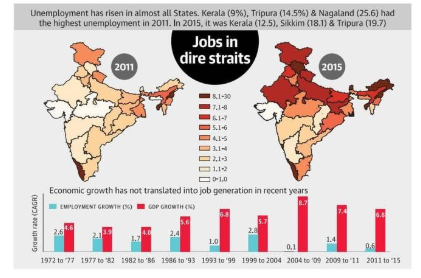 This clearly suggests that the problem of unemployment among educated youth cannot be ignored. However, the real issue at hand is not solely of job creation but also of the creation of quality jobs. In the din generated by the PLFS survey, this critical issue has escaped attention.

The problem can be assessed from a demand and supply side perspective. On the one hand, higher growth has raised the youth’s aspirations for more meaningful jobs, thereby leading to a mismatch between jobs offered and jobs that educated youth are looking for. On the other hand, in today’s era of the fourth Industrial Revolution, young people need to be equipped with necessary skills to work with new technologies. As we have a larger than ever population of educated unemployed, India does not need jobs per se but meaningful, remunerative jobs that align with the aspirations of the youth and skills demanded by the industry. The problem is not unique to India. As per an IMF report, youth inactivity rate for India, at 30 per cent is similar to 25-30 per cent youth inactivity rates in other emerging and developing countries.

The unemployment story will never be complete until we are able to accurately capture performances across all segments of the labour market for meaningful inference. At the same time, we must recognise that perceptions about earnings and jobs are changing fast in the wake of rapid technological advances. The true meaning of being a worker is shifting towards having stable, productive and remunerative employment. This aspect must be captured both at the stage of collection of labour data, and while interpreting and analysing the same for evidence-driven policy-making.

Even as we shift towards macroeconomic policies that maintain the level of aggregate demand, we can assist the unemployed by strengthening the employment programme we already have, namely the Mahatma Gandhi National Rural Employment Guarantee Scheme (MGNREGS). Three actions may be taken towards this end. First, there have been reports that though the budgetary allocation for the scheme may have increased, workers face delay in payment. This is unacceptable, especially in this digital era when beneficiary identification and money transfer are cheap and reliable. Second, as has been suggested, there is a case for extending the MGNREGS to urban India for there is unemployment there. Of course, some rationalisation of existing public expenditure would be needed to generate the fiscal space needed, but we may yet expect a positive sum outcome when this is done imaginatively.

Monthly measurement of the unemployment rate is one of the requirements of the Special Data Dissemination Standard (SDDS) of the International Monetary Fund (IMF). The SDDS — India was one of the early signatories —was established in 1996 to help countries access the international capital markets by providing adequate economic and financial information publicly. India complies with many requirements of the SDDS, but it has taken an exception with respect to the measurement of unemployment.

The Government of India does not produce any measure of monthly unemployment rate, nor does it have any plans to do so. Official plans to measure unemployment at an annual and quarterly frequency is in a shambles. This does not befit India’s claims to be the fastest growing economy and as the biggest beneficiary of a famed demographic dividend.

Creating jobs for an increasingly educated workforce and ensuring that the new workers are well equipped to enter the labour force are twin challenges that deserve greatest priority.

Slowing job growth can be disastrous for society. It will not only widen the economic gap within society, but it will also deepen social friction and cause tears in our social fabric, possibly leading to greater violence and political chaos. The new government will have to focus on an economic agenda without much loss of time. The two most pressing issues are growth acceleration, and creation of productive employment.

PM ordered the formation of two new Cabinet committees that will focus on employment and economic growth, respectively

Consumer Pyramids Household Survey (CPHS): The CPHS is comprehensive, surveying its entire sample every four months. Each survey is a wave. The CPHS is also a continuous survey, and so, for example, three waves are completed in a year. The CMIE’s CPHS thus has a much larger sample and is conducted at a much higher frequency than the NSSO’s.

Further, the CPHS is conducted as face-to-face interviews necessarily using GPS-enabled smartphones or tablets. Intense validation systems ensure high fidelity of data capture. All validations are conducted in real-time while the teams are in the field. The data capture machinery ensures delivery of high quality data in real time obviating the need for any further “cleaning”, post field operations.

Once the data is collected and validated in real-time, it is automatically deployed for estimations without any human intervention.

In 2016, the Centre for Monitoring India Economy (CMIE) added questions regarding employment/unemployment to the CPHS. Since then, the CMIE has been generating labour market indicators regularly and making these freely available for public use.

Difference between the CPHS and the NSSO surveys: The reference period of the employment status of a respondent.

Since the recall period in the CPHS is of the day of the survey (or the immediate preceding day in the case of daily wage labourers) and the classification is elementary, the CPHS has been able to capture the status fairly accurately with no challenges of the respondent’s ability to recall or interpret the status. In contrast, the NSSO’s system is quite complex.