Of the eight accidents, two would be on a national highway and at least three would involve a two-wheeler.

Between now and tomorrow (at the same time), India would have suffered 1,274 deaths in road accidents, deaths that are completely avoidable. Another at least 1,308 people would also be injured, many of them disabled for life.

Of the ones who would be killed in these road accidents, 86 per cent would be men, and in most cases main breadwinner of the family. A majority (72 per cent) of the dead (men and women) would be in the age group of 18-45 years, the population that is most productive and is hailed as India’s demographic dividend.

These examples are based on our analysis of the data presented in annual reports of the Union Ministry of Road and Transport.

In News: Several states have decided not to implement the new Motor Vehicles (Amendment) Act – WHY?

Besides stringent rules and stiff fines, the Act provides for a 10% increase in penalties every year.

The Act contains as many as 63 clauses pertaining to fines and driving licences among others. States can, however, revise fines for more than two dozen provisions that are compoundable, while the penalties for non-compoundable offences—where the nature of the offence is grave—cannot be revised.

The Union Transport Minister Nitin Gadkari differed from what unconvinced states had to say – High penalties under the amendment were undertaken after expansive deliberations and the key objective was to increase road discipline among citizens.

India remains one of the top accident-prone nations in the world.

As per Ministry of Road Transport and Highways data, 1.47 lakh people lost their lives due to road accidents in 2017; the scenario remains the same in 2019. To add some context, this figure is 37.54 per cent more than the total number of people killed in floods and heavy rains in the last 65 years in India.

More casualties than Vietnam War: Between 2014 and 2017, the number of people killed on Indian roads in accidents (5.84 lakh) was more than twice the estimated casualties of South Vietnamese soldiers (2.5 lakh) in the Vietnam War that spanned 20 years between 1955 and 1975.

Bigger killer than snakes: Road accidents in India claim at least three times more human lives every year than those claimed by all snakes of the world put together. (Snakes kill about 50,000 people every year).

A mass murderer: On the global scale, the World Health Organisation estimates that 58,00,000 people die every year due some form of injury. Of these, only 3 per cent are related to war and conflict, while 21 per cent are related to road accidents. Yet, road accidents and road safety receive a fraction of the attention that is devoted to war and conflict.

Why this kolaveri: For every kilometre of road in India, there were 41 vehicles in 2017. In 1970, this figure was just one vehicle per km. The explosion of vehicular density can be well understood from this. 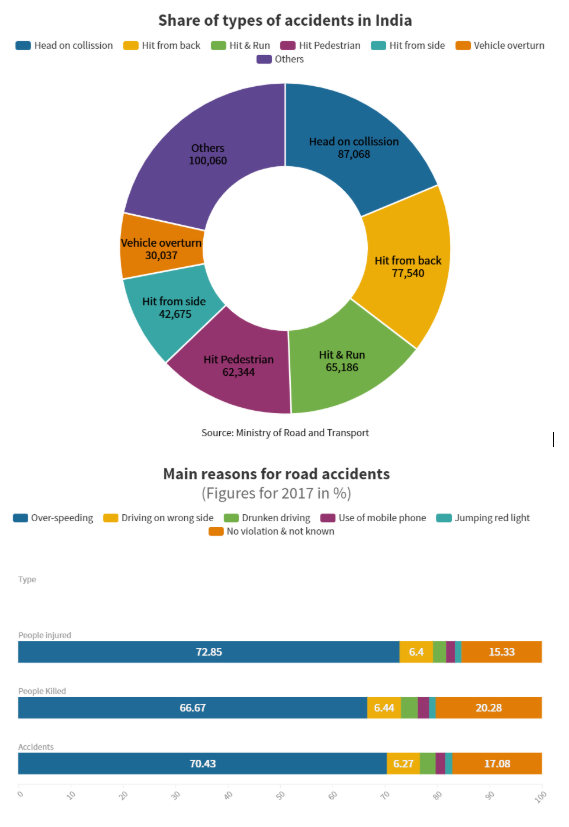 Despite the data and the good intentions behind stricter penalties, states such as West Bengal, Madhya Pradesh, Rajasthan, Punjab, Jharkhand and Maharashtra denied imposing stricter fines to boost road discipline. Meanwhile, other states like Karnataka, Uttarakhand, Gujarat, and Kerala decided to reduce the rates that have been stated in the amended act.

Perhaps, if citizens get to spend more time with their loved ones than spending hours on road, will citizens be able to reflect better on their behaviour and care more about safe journeys for all!

Read EVERYTHING about the Act here