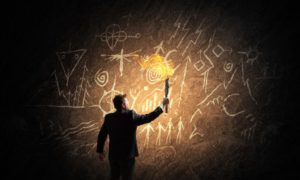 Creativity is not just an isolated department of life; it is the core of life. The very process of living is a creative endeavor. Creativity cannot happen without you, and this is very important to understand. It is your mind that has the ability to imagine, create thoughts, and generate emotions. When you project the inherent nature of your mind outward, it becomes creativity. In this sense, everyone is creative. It’s not as if you can say, “Oh, I don’t want to be creative. I’ll just go on living my life the way I’m living it. I don’t have to worry about it.”

When you are right in the middle of life, creativity is inevitable. Why would you ever desire to avoid it? You are here to express yourself, and in that expression, your life can become complete and meaningful. Should you decide not to express yourself, a part of you will never reach its highest potential, and you will always feel a sense of incompletion in your life. You have to embrace creativity as a part of your life. If you don’t, your life will seem dull and boring and you will be constantly searching for deeper meaning.

Without creativity, new scientific inquiry would have been impossible, and the greatest of scientific minds like Albert Einstein, would have never walked among us. In fact, Einstein attributed his scientific acumen, more than anything else, to his ability to imagine. It was his imagination that allowed him to see the universe in a new way. Most people know Einstein as a great scientist, but very few people know that he was a great dreamer. Notably, Einstein himself said, “Imagination is more important than knowledge. Knowledge is limited to all we know and understand, while imagination embraces the entire world, and all there will ever be, to know and understand.”

Imagination can easily be confused with thinking, but there is an ocean of difference between the two. While thinking is simply a process of regurgitating information that you have already gained, imagination is a process of probing the unchartered realms of your mind. Einstein was able to walk a very different path from all the other physicists of his time because he valued imagination more than thinking.