In News: The Maharashtra BJP’s manifesto for the October 21 assembly elections had said the party will ask the NDA government at the Centre to confer India’s highest civilian award on Veer Savarkar and social reformers Jyotiba Phule and Savitribai Phule. Savarkar is considered to be among the prominent ideologues of the Rashtriya Swayamsevak Sangh (RSS).

Addressing an election rally in Akola district in Maharashtra, PM Modi said, “It is due to Savarkar’s sanskar (values) that we put nationalism as the basis for nation-building.”

Speaking at an event in Varanasi, Amit Shah said, “Had it not been for Veer Savarkar, the rebellion of 1857 would not have become history, we would have seen it from the point of view of Britishers. Veer Savarkar was the one who named the 1857 rebellion as the first independence struggle.”

Former Prime Minister Manmohan Singh, at a press conference in Mumbai last week, had said, “We are not against Savarkar ji, but we are not in favour of the Hindutva ideology that Savarkar ji patronised and stood for either.”

The Congress said it wants to know if it also plans confer the country’s highest civilian award (Bharat Ratna) on Mahatma Gandhi’s assassin Nathuram Godse. Congress spokesman Manish Tewari said the BJP-led government needs to seriously think about the path it wants to take on the issue in the 150th year of Mahatma Gandhi’s birthday. He said Savarkar was tried (and later acquitted) in the Mahatma Gandhi assassination case and an inquiry commission had found that possibly he and some of his colleagues had prior knowledge of the plot.

The main challenge thrown by the British rule and colonial modernity under the pale of capitalism was for Hindus to justify their existence as a society. Who were they? Could Hindus survive in a modern world dominated by the expansionist organised religions, nations and nation-state?

Savarkar responded to these challenges. The coming together of various pagan traditions as Hinduism to meet the challenge of the Abrahamic monotheism is a centuries-old process. Savarkar consolidated it under a new ideological construct. He wielded it into a coherent political construct, Hindutva that aimed to answer the challenges of the modern world, especially the charge of the colonialists that India is not a nation and hence unworthy of self-rule.

For India to be able to resist imperialism, a nation had to be born. For Savarkar, that nation was a Hindu Rashtra. Only a Hindu nation transcending caste, regional and linguistic barriers was capable of resisting imperialism. No longer would invading armies roam around the countryside; no longer would India be a playground for colonial powers; no longer would its people and cities be pulverised by warlords for they would have to face a powerful Indian state created on the foundation of a Hindu nation. And the foundation of this Hindu nation was Hindutva.

Savarkar was a radical and his Hindutva, too, was a radical break in Hindu thought: anti-caste, reformist, modernist and futuristic. It was a modern Hindu response to the modern world.

Death – 1964: Savarkar declared his wish to attain Samadhi and started hunger-strike on February 1, 1966 and passed away on February 26, 1966. He believed that his purpose of life is solved as India has gained Independence.

In 2002, Port Blair airport at Andaman and Nicobar’s Island was renamed after Veer Savarkar International Airport. 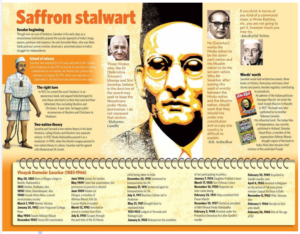