Part of: GS Prelims and GS Mains I- Society

Part of: GS Prelims and GS Mains I- Art & Culture

Desertification: Another 30% of the India’s land is undergoing degradation 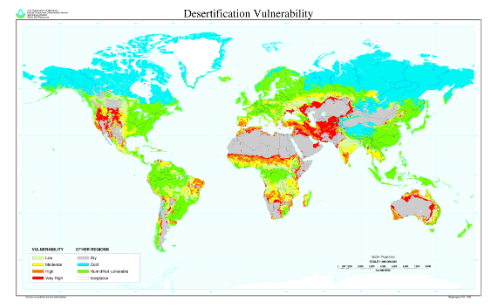 “According to Desertification and Land Degradation of Selected Districts of India, an atlas published by the Indian Space Research Organisation’s Space Application Centre (SAC), Ahmedabad in 2018, some 96.40 million ha, or about 30 per cent of the country’s total area, is undergoing degradation”

Various schemes by the Government of India which are helping to reduce land degradation:

Launch of a flagship project on enhancing capacity on forest landscape restoration (FLR) and Bonn Challenge in India, through a pilot phase of 3.5 years implemented in the States of Haryana, Madhya Pradesh, Maharashtra, Nagaland and Karnataka. Ministry of Environment, Forest and Climate Change (MoEFCC) in partnership with The International Union for Conservation of Nature (IUCN), through this flagship project aims to develop and adapt best practices and monitoring protocols for the Indian states and build capacity within the five pilot states on FLR and Bonn Challenge. This will be eventually scaled up across the country through subsequent phases of the project.

Three Capital of Andhra Pradesh : there was nothing wrong in having the capital at three places says CM

History of the formation of Andhra Pradesh State:

Mind the gap: On gender gap

Indian agriculture is under an invisible emergency