Mission Indradhanush (MI), one of the largest public health programmes in the world was championed and strategised by the Ministry of Health & Family Welfare in 2014. Since then, immunisation seems to have taken centrestage as a crucial pillar of public health.

Mission Indradhanush is targeted to immunize children who are either unvaccinated or partially vaccinated i.e. those that have not been covered during the rounds of routine immunization for various reasons.

To bring sharper focus onto the least vaccinated areas, MI has been transformed into “Intensified Mission Indradhanush” (IMI) that aims to reach those rural and urban slums that have under-performed during MI. One hundred and ninety high-focus districts and urban areas across 24 states have been selected for such intensified efforts. There is a sharper focus on surveillance activities and to create partnerships with states, community-level departments and ministries for grass roots implementation and monitoring.

The importance of vaccines in India

With the second-largest population (1.3 billion approximately), around 27 million children are born every year here. India also has the largest burden of under-five mortality, more than what prevails in some of the poorest countries in the world. Nearly 39 children under the age of five years die for every 1,000 live births each year — pneumonia and diarrhoea are the leading killers. Approximately 0.1 million children die due to rotavirus-induced diarrhoea alone, which is around 50 per cent of all deaths attributed to diarrhoea. Evidence shows that unimmunised and partially-immunised children are most vulnerable to diseases and disability, and are at three to six times higher risk of death than fully immunised children. A large percentage of under-five mortality in India can be averted through vaccination.

Evidence shows that unvaccinated and partially vaccinated children are most susceptible to childhood diseases and disability, and run a three-to-six-times higher risk of death as compared with fully immunized children. To achieve herd protection (commonly referred to as herd immunity) a high immunization coverage needs to be achieved and maintained in the community. This means that every cohort of children born needs to have a sufficiently high number of children immunized to offer protection to those who missed immunization, or to those who are still susceptible to the disease even after immunization (for e.g.: immunocompromised individuals). Any fall in coverage leads to disease outbreaks as seen periodically in case of measles or the recent outbreak of diphtheria in many states.

India faces a threefold challenge when it comes to its vaccination programme:

MI and IMI have resulted in a rapid increase in national full immunization coverage and the decreasing number of children and pregnant women who were not immunized or partially immunized. It has successfully implemented experience from the polio eradication initiative. A multi- and cross-sectoral collaboration was successfully established between different government departments. However, challenges remain.

Despite increasing its focus on vaccination coverage for children, the Union government continues to face challenges in curbing instances of vaccine-preventable diseases (VPD) in India. According to World Health Organization (WHO) figures for VPDs, such as diphtheria, Japanese encephalitis, measles, and tetanus, India has not shown a persistent decreasing trend.

The indicative gaps being –

IMI is focusing on coverage, but not on the outcome (absence of vaccine-preventable diseases). The policies lack critical and comprehensive assessment of the impact of the programme. 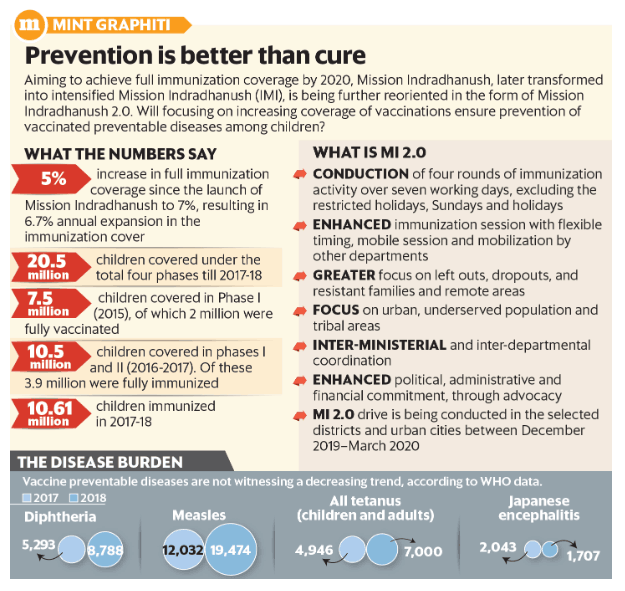 While going ahead, we should have an integrated model, which can deliver robust routine immunization programme, supported by public health surveillance wherein we measure the output by counting every case of VPD

An immunisation programme, anywhere in the world, is the most cost-effective public health intervention. It is the basic and foremost right of children across the globe, that they receive a safe and effective “shot in the arm” in a timely manner.

A. Write a note on the Government of India’s recently launched ‘Mission Indradhanush’ programme. Also, critically evaluate how successful have been similar programs in the past.

B. Consider the following statements about Mission Indhradhanush