In News: Approval has been given for Automated Facial Recognition System by National Crime Records Bureau (NCRB)

What is Facial recognition?

Facial recognition is a biometric technology that uses distinctive features on the face to identify and distinguish an individual. From the first cameras that could recognise faces in the mid-1960s up to now, facial recognition has evolved in many ways — from looking at 3D contours of a face to recognising skin patterns. With machine learning, the technology has become capable of sorting out types of faces.

It’s there on Facebook, tagging photos from the class reunion, your cousin’s wedding and the office summer party. Google, Microsoft, Apple and others have built it into apps to compile albums of people who hang out together.

First off, the computer has to learn what a face is. This can be done by training an algorithm, usually a deep neural network, on a vast number of photos that have faces in known positions. Each time the algorithm is presented with an image, it estimates where the face is. The network will be rubbish at first, like a drunk playing pin the tail on the donkey. But if this is done multiple times, the algorithm improves and eventually masters the art of spotting a face. This is the face detection step.

Next up is the recognition part. This is done in various ways, but it’s common to use a second neural network. It is fed a series of face pictures and learns – over many rounds – how best to tell one from another. Some algorithms explicitly map the face, measuring the distances between the eyes, nose and mouth and so on. Others map the face using more abstract features. Either way, the network outputs a vector for each face – a string of numbers that uniquely identifies the person among all the others in the training set.

In live deployments, the software goes to work on video footage in real time. The computer scans frames of video usually captured at crowd pinch points, such as entrances to football stadiums. It first detects the faces in a frame, then churns out vectors for each one. The face vectors are then checked against those for people on a watchlist. Any matches that clear a preset threshold are then ranked and displayed. In the British police trials a typical threshold for a match was 60%, but the bar can be set higher to reduce false positives. 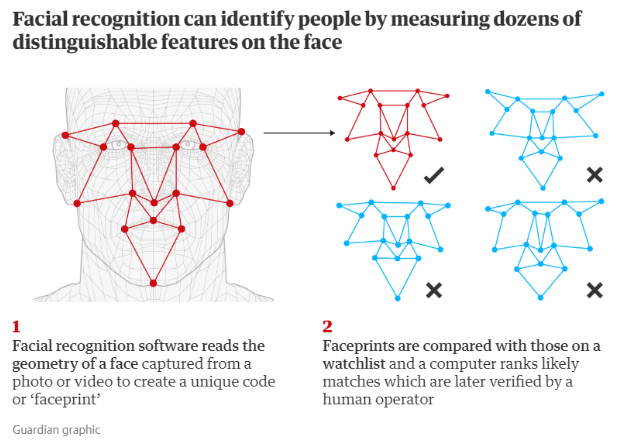 Is Facial recognition a cause for concern?

India, however, is rushing to adopt public facial recognition.

Difference of opinion: Against the technology

Once cameras are connected to facial recognition software, citizens have no privacy anywhere. To those with power — governments or businesses — people are seen, recognised, analysed, predicted and controlled all the time. This technology can be used to perfect despotism.

Once people allow their government to permit its construction, they are entrusting all future governments, and all future dominant data-mining companies, with powers that can be used to destroy freedom. This is why the other advanced democracies are hesitating. In civil society, within government, and even in the tech companies themselves, there is a sudden awareness that a tipping point has been reached.

Facial recognition is just one form of identification. Even if it is controlled or forbidden to use on the public, all the other forms of digital identification, when accompanied by comprehensive behaviour collection and secretive data analysis, are a threat to the autonomy of each individual. There is a need to regulate the industry on behaviour collection, and subject government surveillance to the rule of law.

For the government to allow the private market to create the infrastructure, placing the impetus in constitutionally unaccountable hands while reserving to itself the right to have continuous access to the data, should also be held a violation of constitutional human rights.

Note: Puttaswamy judgment- The right to privacy is protected as a fundamental constitutional right