Inauguration of Atal Tunnel in Rohtang and its Strategic Importance

Earlier the valley was cut off for about 6 months each year owing to heavy snowfall.

What is the genesis of the project?

A feasibility study of the project Rohtang Tunnel was carried out in May 1990 following which the geological report was submitted in June 2004. This was followed by a design and specification report which was prepared and finalised in December 2006. Border Roads Organisation (BRO) officials say the project received final technical approval in 2003. Following approval by Cabinet Committee on Security in 2005, tenders were floated in 2007 and the foundation stone was laid in July 2010 by UPA chairperson Sonia Gandhi. The project was scheduled to be completed by February 2015 but it got delayed due to unexpected problems. It was originally designed to be 8.8 km long but GPS readings taken on completion show it to be 9 km long. 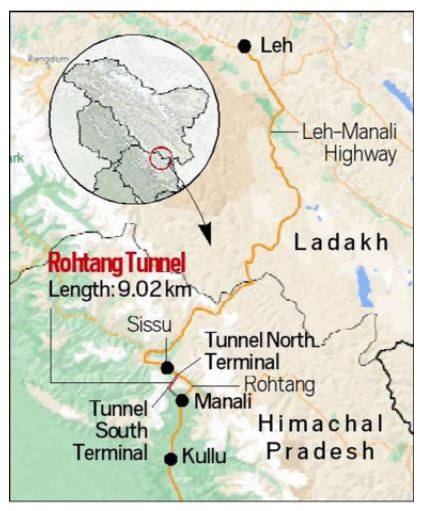 A. Security and Connectivity:

B. Development of People and region: Atal Tunnel will prove to be a major boon for the entire region.