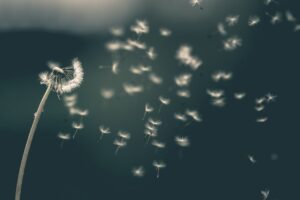 A lot of times our single biggest problem is not knowing how to or when to let go of something. If only we can develop the ability to let go of things, we can solve innumerable problems of life very easily. Here is a beautiful story that illustrates this point.

The little boy meandered into the room where his mother was sitting at her desk writing. She glanced down at him and saw that he was carrying a precious vase that her grandmother had given her. Almost absentmindedly she said to him, “Robert, go put the vase down before you drop it and break it.” “I can’t,” he replied, “I can’t get my hand out.”

“Of course you can,” she said, “you got it down there.” He said, “I know mom, but it won’t come out.” The neck of the vase was very narrow and his hand had fit neatly inside and it was now up to his wrist. He continued to insist that he could not get it out. Growing a little concerned, his mother called out to his dad.

Dad calmly took control and began gently pulling the arm trying to extract the hand from the vase. He tried loosening it up with soapy water. Still nothing. He then got some vegetable oil from the kitchen and poured it around the wrist and let it seep into the vase. He wiggled it some. It still did not budge.

“I give up,” the dad said in desperation. “I’d give a dollar right now to know how to get it out.”

“Really?” little Robert exclaimed. Then they heard a clinking sound and his hand slid right out of the vase. They turned the vase upside down and a penny plopped out. “What’s this?” they said in unison.

“Oh, that’s the penny I put inside. I wanted to get it out so I was clutching it in my hand. But when I heard Dad say he would give a dollar to have the vase free, I let go.”