Context: The Indian Goods and Services Tax came into force on July 1, 2017 and completes its five years of implementation. In this context, we need to analyse if it has delivered on its objective and what changes are required in the future to make it more efficient.

What is GST? How does it work?
What are the benefits of GST?

For business and industry

For Central and State Governments

Which taxes at the Centre and State level are being subsumed into GST?
How would GST be administered in India? 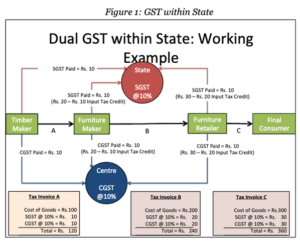 How will IT be used for the implementation of GST?
How will imports be taxed under GST?
What is GST Council?

What was 101st Constitutional Amendment about?

How has GST evolved with time and incorporated new measures to improve the efficiency of the system?

The last five years of the GST have seen many policy changes along with procedural and technological overhauls, some of which have completely changed the face of the tax system.

In the last five years, has GST achieved its objective?
Then, why are some states unhappy with the way GST is administered?

The amount of compensation to be distributed to each state is calculated as follows:

What more needs to be done?

Mains Practice Question –GST was envisaged as transformation of economic structure of the country. In its working of five years, critically examine if it has been able to achieve its stated objectives.