Context: On June 28,2022 the North Atlantic Treaty Organization (NATO) Secretary-General announced the signing of a memorandum of understanding (MoU) between Turkey, Finland and Sweden in a trilateral meeting held in Madrid, Spain.

There are currently 30 members in NATO 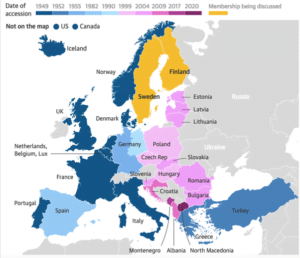 NATO was facing existential challenges before the war

However, the recent developments have strengthened NATO