Context: Recently, President Droupadi Murmu while addressing the delegates of a National Workshop on ‘Janjatiya Anusandhan – Asmita, Astitva evam Vikas’ said that the Indian Knowledge System (IKS) that the National Education Policy is currently emphasizing needs to incorporate the knowledge of indigenous tribes. 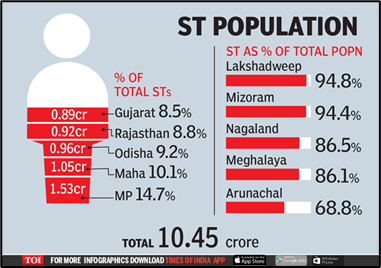 About National Commission for Scheduled Tribes

Q.1) If a particular area is brought under the Fifth Schedule of the Constitution of India, which one of the following statements best reflects the consequence of it? (2022)

Q.2) At the national level, which ministry is the nodal agency to ensure effective implementation of the Scheduled Tribes and Other Traditional Forest Dwellers (Recognition of Forest Rights) Act, 2006? (2021)