1. What do you understand by ‘citizen centric governance’? Why is so much importance being given to this concept? Is it compatible with the idea of ‘minimum government-maximum governance’? Analyse.

All government processes are citizen oriented, a system of where all government activities are pivoted around citizens, citizens become proactive by:
a) Seeking information,
b) Giving suggestions,
c) Demanding better services,
d) Holding service providers and other government agencies accountable.
e) Active participation in decision making.

Write your opinion briefly and conclude.

The concept of ‘citizen centric governance’ indicates governance in such a manner, which is friendly and gives utmost priority to the interests of the people governed. It thus, includes the concept of participatory governance, wherein the people do not feel that they are merely the subjects of governance by the government, but that the government actually cares about their well-being, and hence their role is very important in the administration of the country.

The idea of ‘minimum government maximum governance’ indicates that the government will make like easier for the people, without unnecessary interference by the government officials. Thus for instance, the schemes of Direct Benefit Transfer, e- biz platform makes obtaining allowances, licenses etc more convenient for the people, while at the same time saving them from heckling government officials, delaying their work and asking for bribes etc. The spread of information technology has ensured that governance can be effective, while reducing government interference at many levels. This idea is thus compatible with ‘citizen centric governance’, as both of these concepts value the interests of the citizenry first, while avoiding micro management of citizens’ actions.

2. How far has India been able to protect it’s interests at the WTO forum? Identify related issues that have been in news recently? Also analyse India’s stand in Nairobi?

As a leader to developing and under developed countries, India’s role in WTO negotiations is praiseworthy. However, many are of the view that India had failed to protect its interests in a long term manner. But, considering the past times and futuristic needs, it is improper to judge India’s achievements with a narrow scope.

Part I: Focus on India’s interests and mention which among these interests were successful/ protected and which are failed. This part should cover some of the following: (Write 3-4 points)

Part II: Mention few recent issues which are in news

The Tenth Ministerial Conference in Nairobi saw a clash of Interests between developed and developing Countries. (Write any 4 points)

As a leader to developing and under developed countries, India’s role in WTO negotiations is praiseworthy. However, many are of the view that India had failed to protect its interests in a long term manner. But, considering the past times and futuristic needs, it is improper to judge India’s achievements with a narrow scope.

Successful negotiations:
> Complete ban of export subsidies by the developed countries immediately, and reasonable time period for developing countries.
> Mandatory application of safeguards against public stockholding until a permanent solution is arrived.
> India’s forward step to adopt the so called ‘new necessities’ like sound IP regime, environmental laws etc. Of course, these are said to be deviations from Doha Development agenda.
> Establishment of Special Safeguard Mechanism to look after the issues of developing countries like food security, farmer protection etc.
> Permission to levy anti-dumping duties against sudden surges on imports that destabilise domestic markets.

> No definite road map and time period for drawing permanent
solution for the issue of public stockholding and amber box subsidies.
> Failure to keep the developing and developed countries united in negotiations and improper commitments.
> Losing relevance to WTO trade regime due to multilateral agreements like TPP, TATI etc.

Notwithstanding to these facts, India had taken a reasonably fair stand in Nairobi declarations as per the time factors. Since, good environmental mandate and IPR is also in the interests of India for better future prospects, it is necessary to dilute some provisions reasonably. However, in order to counter the future threats from the said multilateral agreements, India needs to take follow up steps by uniting all the developing countries.

3. The idea of sustainability and inclusiveness are ingrained in the Gandhian model of economic development. Do you agree? Substantiate.

Basic idea of Gandhian economic model – Gandhian model of economy considered village as a republic. His ideas were village centric where a village is independent in its social, political and economic sphere. He envisaged a vibrant self-sufficient village where people work in cooperation to meet the requirement of the village society. The idea of inclusiveness and sustainability is engrained in the gandhian model of economy which was based on Sarvodaya.

Give your affirmative stand.

Working on his ideas can resolve many problems that we are facing today like climate change, global economic slowdown, emergence of new disease, decreasing productivity of agriculture and insecurity among minorities. Recent projects like start up India,  Stand up India, Make in India etc should be mentioned. 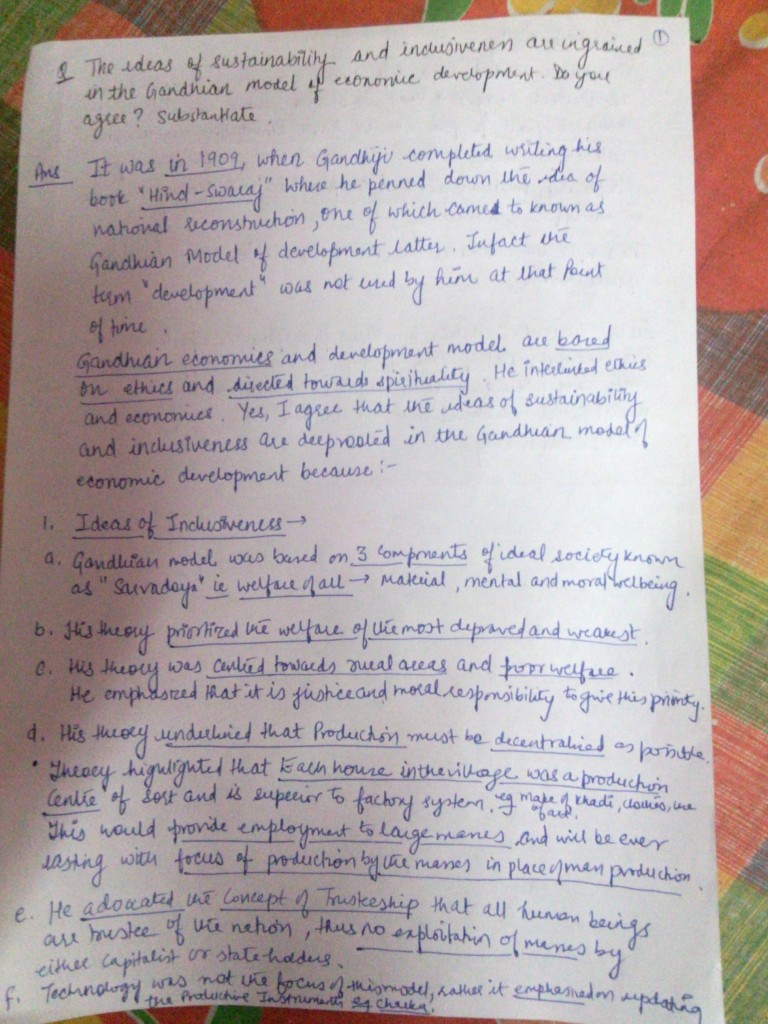 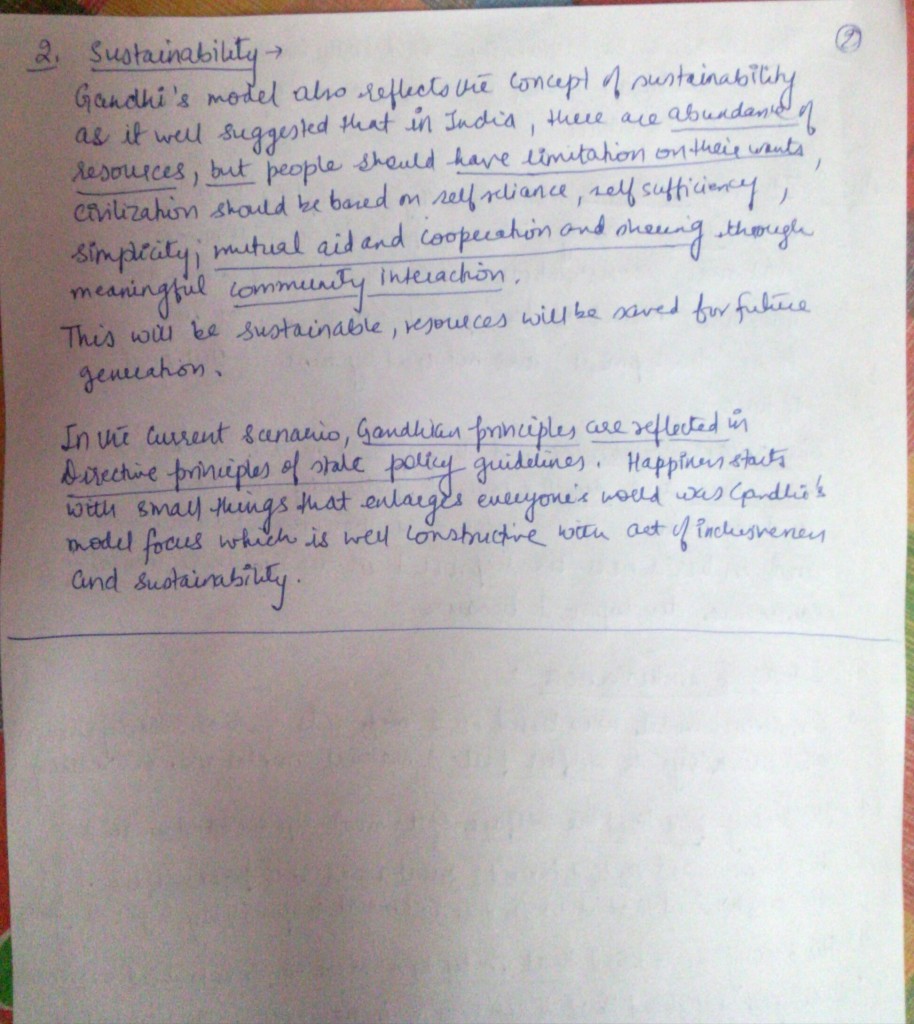