Read about other Topper’s Strategy

I am privileged to share my journey of UPSC which is inclusive of both struggle and success and I would also say slightly different from many others yet at the same time very similar to a lot of you. 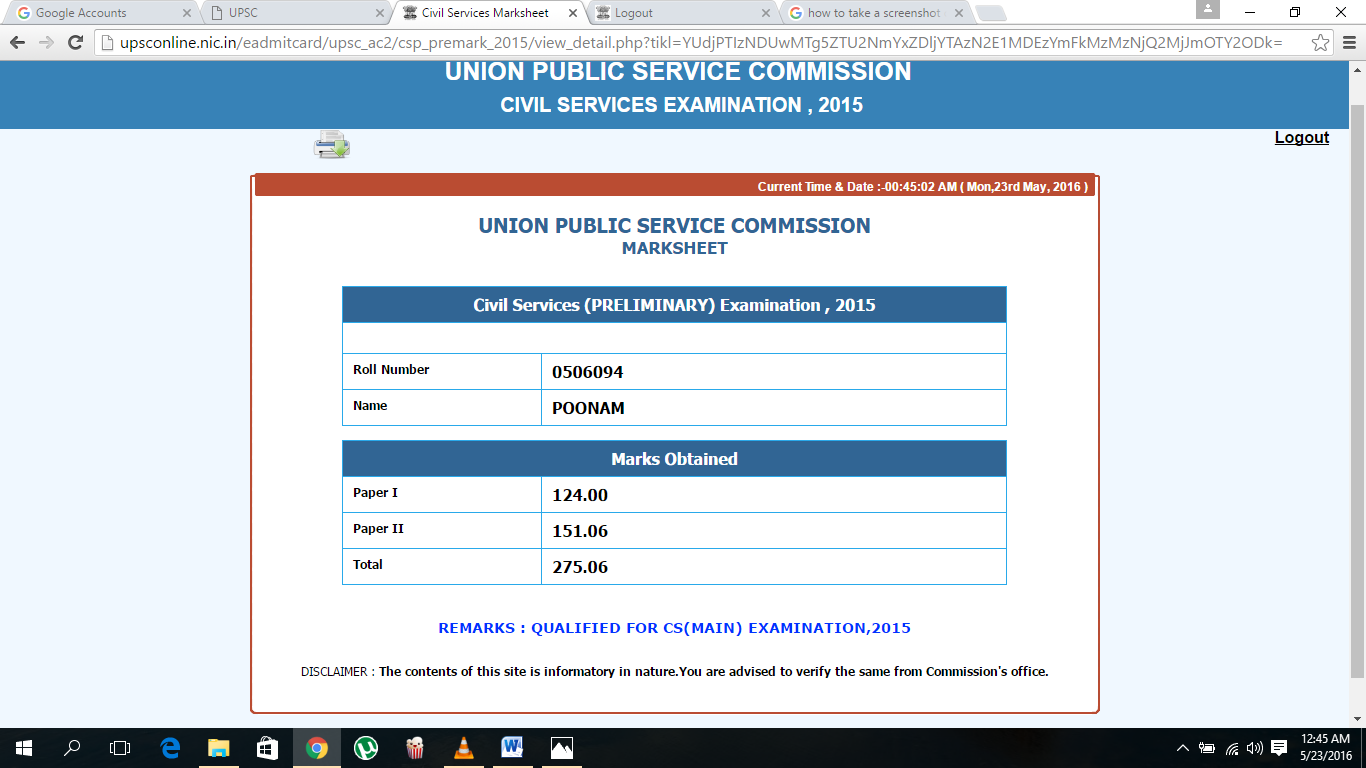 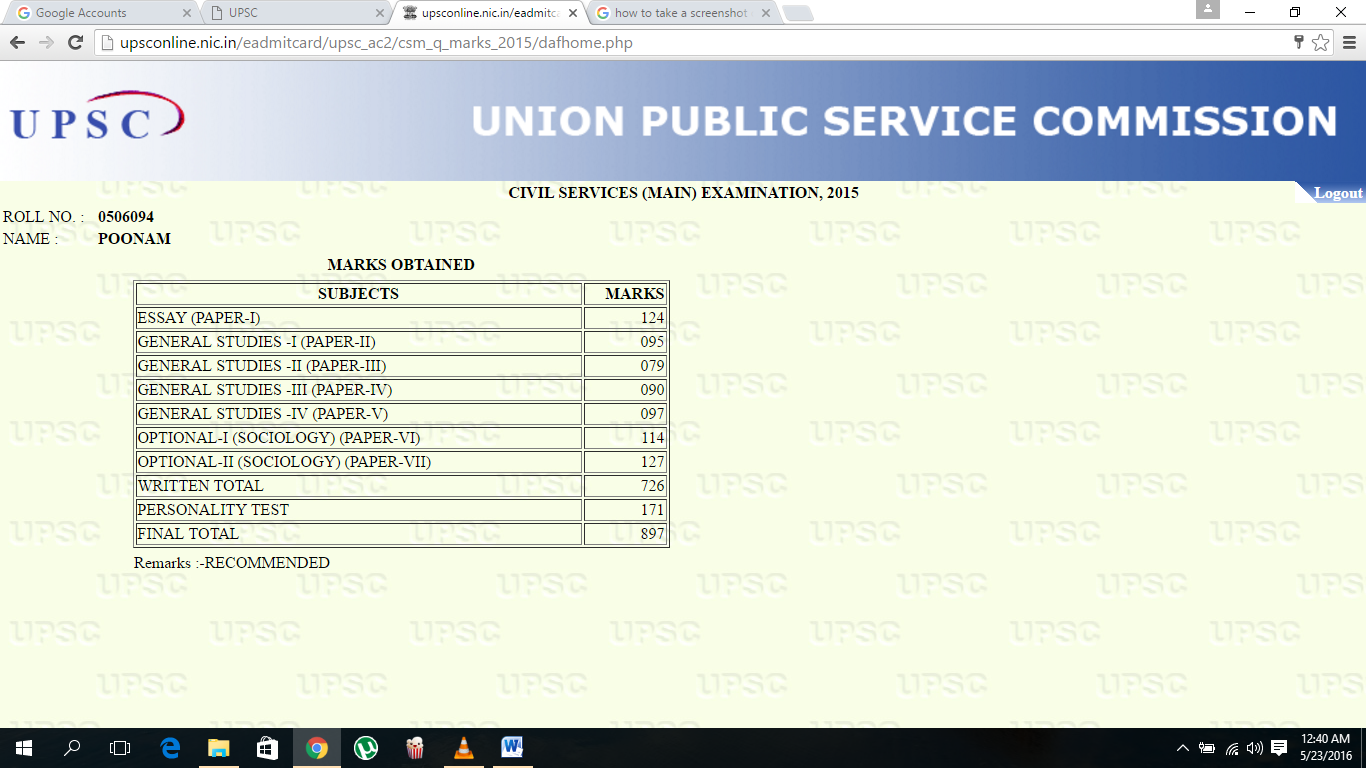 I have been born and brought up in Delhi, though my ancestral roots belong to Village Chhara, Distt. Jhajjar (Haryana). I am happily married for the last 7 years and have an infant son 8 months old.

I started very late for UPSC Preparation (In fact I gave my first attempt at the age of 28 years). As specified above I started my career as a Primary Teacher in a Delhi Govt. School and along with the job did my graduation as external Student from Delhi University. After completing my graduation I appeared for different Bank PO Exams and SSC Graduate Level Exam and cleared all of them(SBI PO,SBI Associates PO, Union Bank Of India PO, SSC Graduate Level 2005) but finally chose SBI PO( As I look back, I regret that there was nobody to guide me about UPSC Exam, had somebody at that time would have guided me about UPSC Exam I would have given it a try at that stage and may be you would have been reading this interview much earlier. Also, I want to share the fact that at that stage I used to be very under-confident about my chances at CS Examination. I am sharing these thoughts so that all of those who are somehow feeling the same as I had once been, can come out of it and not repeat the mistake which I did.

After 3 years in SBI, I joined the Income Tax Department securing a very decent rank(7) at all India level in SSC graduate level Examination 2006 which gave me the confidence of writing UPSC and also the fact that being a General Category candidate my attempts were going to be wasted anyhow  because of my age. I thus gave my first attempt at UPSC CSE in 2009 and got Railways (RPF). I didn’t join that service and sat for CSE 2010 but again I got Railways (IRPS). Meanwhile, I had cleared Haryana PSC and joined as Dy.SP in Haryana Police in 2011. In 2011, I couldn’t qualify Prelims and my tryst with UPSC was over due to age limit. Later, as 2011 candidates were accorded an extra attempt at CSE 2015 so I got an opportunity to appear again for UPSC. This attempt came as a great challenge and opportunity as I was out of touch with preparation and the fact that I was 9 months pregnant at the time of prelims and while mains I had a son about 3 months old was making it even harder. But as luck would have it, I got my best rank in the most challenging circumstances.

Because of my special circumstances I could study only for 2-3 months for Prelims and for Mains I could hardly get a month before mains (since my baby was born in Sept.) So, could not prepare the whole syllabus nor could study for long time. Whatever little I used to study I concentrated on focusing on the traditional areas like Polity, History, Geography, and my optional Sociology. Also, I used to make notes of certain key areas in every paper for quick reference n revision.

Since a lot is dependent on Mains, and considering the lengthy papers I think one need to maintain the speed as I suffered a lot because of lack of speed and time management. In every paper I was not able to maintain speed and thus have to leave 20-30 marks paper unattempted. Writing Answers every day is the key to obtain good marks in Mains and I sincerely believe I could have gained at least 40 marks had I done that practice as I would have been much better in my speed and time management. For this, I strongly recommend IASbaba TLP Initiative and InsightsonIndia Secure Initiative on current events. I would like to thank IASbaba for TLP sociology initiative that helped me immensely.

Learnings from the Journey

As I Look back now, I feel that lack of confidence in myself actually costed me a lot. We all need to remember the fact that it is Just an Exam like many others and can be cracked with dedication and a strategic preparation. We should not be scared of this Exam. Many of us write our first attempt to be able to just clear prelims (as happened with me in my first attempt CSE 2009, I could clear Prelims but since was focus was only on clearing prelims I had not prepared enough for Mains and thus though qualified Mains but got just above Cut Off Score and thus even getting good marks in Interview (208) I could get only Railways. This attitude of not taking the holistic view of all stages of Exam Prelims, Mains and interview costed me my first Attempt.

Secondly, I feel that this Exam actually requires Consistent Efforts. There should be more regularity in the Preparation. It is more beneficial to study for 6 hours each rather than studying one day for 18 hours and not studying another day at all. Also, study schedule should be properly planned and should be followed religiously. Prepare a monthly planner, weekly planner and daily planner based on the syllabus and time at one’s disposal. Every morning plan your day (what is your target today) and every night audit your output.

Thirdly, never let stress take over you. All of us have d same anxiety and pressure of this exam but handle dis nervousness effectively otherwise it will result in more problems. Be an optimist always. (I am sharing this fact because of the personal experience of the failure in Prelims in my third attempt. I was almost confident of getting a very good rank in my second attempt but unfortunately even though obtaining a very good score in mains of CSE 2010 I got a very bad score in Interview n could again get Railways (IRPS) and this threw me into depression. I could not prepare for the Changed pattern of CSAT of 2011 Attempt and the stress n pressure of last attempt made me lose in the first round itself. Now, I realize that had I taken the failure of obtaining good rank in CSE 2010 in a positive stride and not taken stress of last attempt I could have easily managed the changed pattern of CSE 2011 and would have easily qualified Prelims. (I have earlier qualified Bank P.O exams and CSAT was not that difficult thing for me but the stress I took in the last attempt ruined my Third Chance).

Fourthly, we need to take into account the factor of luck also in this exam. One need to understand that to be in the list or not is also dependent on so many permutation and combination and one should also factor in the handwork of one’s destiny in it. Give your best shot at UPSC but also have a backup plan to fall back on as life goes on with or without UPSC.

Been through this momentous journey of struggle and success ,I would only say have a positive thinking ,take both success and failure in your stride comfortably, learn from your failures but learn more from your success as it allows you to respect the struggle of all those who couldn’t succeed. Thank God, family, friends for their role in your success and support in your failure. Whatever be the case try to move forward in your life, give your best and leave the rest to the almighty. I would only say this is just an exam, Life is a much bigger canvas and it is having both bright and dark shades in it and both have their beauty. Explore Life and yourself. May be you are meant for other bigger things and for doing great things in life one don’t need to be a civil servant only, Being a great human being is enough and that is wat really matters.

Wishing you all very best for not only this exam but the greatest examination called life. I hope that reading about my journey can prove to be helpful in any way possible. You can reach me at poonamrandhawasingh@gmail.com. I would love to help you within my limited abilities.

IASbaba: Poonam’s life is a lesson for many of you out there. Look back and think!