The new policy is seen as a development that will boost demand for the aviation sector in the long run. But, on some counts, the policy falls short.

The cornerstones of the new civil aviation policy are competition, consumers, connectivity (within India and with the rest of the world) and investment—both from domestic and foreign investors.

The government is convinced that this will be the key to realizing its target of growing domestic passenger traffic nearly four-fold to 300 million by 2022.

(Only, the number of years is done away with.)

Silent on formation of an independent civil aviation authority and the fate of Air India: 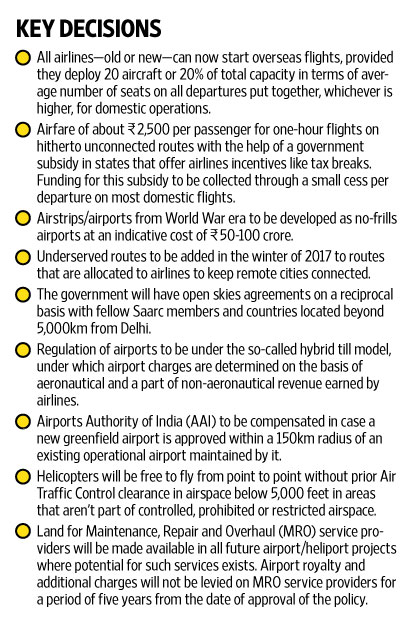 Creation of a seamless internal market in India requires—

Why is the ‘Road Infrastructure’ gaining prominence?

Roads form vital links between markets that are not connected— India has set itself the target of awarding 25,000km of road projects in 2016-17 under the ministry of road transport and highways and the National Highways Authority of India, compared to the 10,000km awarded in 2015-16.

McKinsey estimate: Around 13% of GDP is compromised by the following logistical lacunae in India compared to 7-8% in developed economies

Various initiatives taken by the Government—

The humanist face of religion

A greater focus on farmer welfare

The ethics of automation

Lost in the palace of Chinese illusions

Inspirational Videos: This Video will Surely Make You Stand Again! Do You Love Your Parents? A Must Must Watch