In the last 10 months, the new government under PM Modi has engaged with almost all the Gulf countries and every interaction has yielded substantial agreements which will take bilateral relations into new areas and reshape ties to make them relevant to contemporary times.

Every country visited expressed its admiration for India’s economic achievements and pledged to become a partner in India’s development efforts.

Most of the countries recognize India as their “strategic partner”, a status that represents a high degree of shared values, perceptions and approaches to matters of security concern.

Every one of the joint statements between India and the Gulf countries contains a subtext that imposes a new responsibility on India: how to shape a role to promote security in the Gulf

It specifically refers to the peace and stability of the region being served by “a strong, united, and prosperous and independent Afghanistan” and their agreement to strengthen trilateral consultations and coordination.

West Asia today is in the throes (intense or violent pain and struggle) of the gravest crisis in its modern history.

With the deep doctrinal and political divide between them (Iran and Saudi Arabia), the proxy wars in Syria and Yemen, and the attendant proliferation of jihad, the stage is set for their differences to escalate into direct conflict.

This is a daunting challenge, but India is fully equipped to handle it. India’s growing capabilities and stronger national branding, in fact, makes it a credible partner. The interplay among these nations actually offers India new avenues of cooperation. The time has come to live up to this commitment.

Financial Inclusion (FI) is the process of ensuring access to appropriate financial products and services needed by all sections of the society in general and vulnerable groups such as weaker sections and low income groups in particular at an affordable cost in a fair and transparent manner by mainstream institutional players.

Surveys that we are currently running in Bihar suggest that, even now, moneylenders represent the major source of loans for rural households, accounting for 35% of total loans:

Not treated as an Efficient Business Model:

Banks are pursuing FI as a regulatory requirement rather than treating it as a business model.

BCs should be selected on the basis of their residence as research has proven that BCs, who reside in the vicinity of their clients and are often from the same community, can more easily address such constraints—

Financial Inclusion acts from supply side by providing financial market/services that people demand whereas Financial Literacy stimulates the demand side by making people aware of what they can demand. Therefore, access to financial services and Financial Education must happen simultaneously and must be a continuous, an ongoing process and must target all sections of the population. 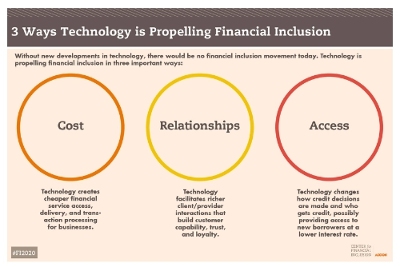