How misinvoicing is robbing developing countries of export earnings

About: According to Global Financial Integrity (GFI) December 2015 report

Figures say it all:

$1.1 trillion that flowed illicitly out of developing countries in 2013 was greater than what they received by the combined foreign direct investment (FDI) and net official development assistance (ODA).

Hence, UNSDGs has incorporated curbing IFFs into its framework.

What is trade misinvoicing?

Invoice: An invoice shows what a buyer has to pay to the seller.

Misinvoicing: The amount actually paid or obtained may be higher or lower than the amount indicated in the invoice.

Country A exports $100 item to Country B.

Difference would exist as:

Trade misinvoicing happens when there is a difference in the amount even after factoring the basic calculations.

Such activities often take place along with legitimate trade, which provides a good cover.

Preventing trade misinvoicing requires to first identify the countries and its exact products.

Why these countries: exports of these commodities constitute a large part of their total exports. They are also called Commodity Dependent Developing Countries (CDDCs). 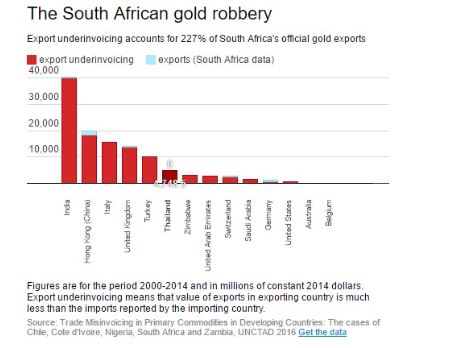 India not immune to trade misinvoicing

Living in a warmer country

What Swachh Bharat should have addressed