What is Corporate Governance?

Corporate governance is the system of rules, practices and processes by which a company is directed and controlled and involves balancing the interests of a company’s many stakeholders, such as shareholders, management, customers, suppliers, financiers, government and the community. Corporate governance also provides the framework for attaining a company’s objectives and hence encompasses practically every sphere of management, from action plans and internal controls to performance measurement and corporate disclosure.

Various initiatives have been taken in the past by the Ministry of Corporate Affairs (MCA) and Securities and Exchange Board of India (SEBI) for corporate governance. As a result, SEBI came out with proposed changes, shown in the image below, to be made in the organisations to ensure effective corporate governance. 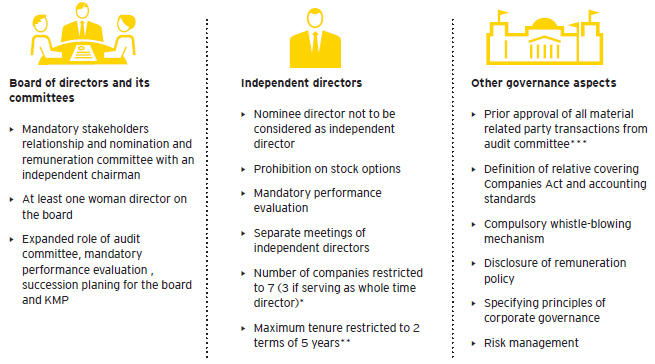 The recent spat between the TATA Sons and the ousted chairman Cyrus Mistry has once again brought the corporate governance compliances by various companies under the scanner. Unfortunately fingers pointing towards a reputed name such as  TATA Sons raises concerns about the level of compliances in smaller organisations with a lesser reputation.

The Board of Directors are the direct stakeholders influencing corporate governance. Directors are elected by shareholders or appointed by other board members, and they represent shareholders of the company. The board is tasked with making important decisions, such as appointments, compensation and dividend policy.

Boards are often comprised of inside and independent members. Insiders are major shareholders, founders and executives. Independent directors do not share the ties of the insiders, but they are chosen because of their experience managing or directing other large companies. Independents are considered helpful for governance, because they dilute the concentration of power and help align shareholder interest with those of the insiders.

With respect to this the clear message out in open, as a result of the TATA Sons fiasco, is  that whoever controls the dominant shareholding is responsible for taking major decisions and has a strong influence on those decisions.
Such shareholders act as alternative power centres without any accountability or formal responsibility. India is full of family-controlled companies with dominant shareholdings and hence it becomes really difficult to have a Board that can discipline the dominant shareholders from whom the Board derives all its powers. Power in a company depends upon the block of shares you control and hence the the concept of shareholder democracy seems fictitious.

Additionally, the TATA sons issue also bring in the open the fact the the guidelines on corporate governance merely serve as a fig leaf to hide the brute reality of the exercise of power within companies. The compliance of these guidelines is not taken very seriously and manipulations are carried out. Practical adherence is way below the theoretical compliance as shown in audit reports etc to mislead the stakeholders.

Window dressing is done and rosy pictures are drawn through reports and awards on corporate governance. However, the true picture is not so beautiful as it seems as witnessed in various recent cases such as the Satyam, Sahara and the Shardha scam.

All these problems are not endemic to India alone and plague even the most advanced economies such as the US.  In recent instances banks in the US have rushed to pay huge fines to the authorities so that they could avoid prosecution.

Steps have been taken by regulators over the years to address abuses of power. The standards of corporate governance need to be extremely high and the interests of minority investors need to be safeguarded in the best possible manner to attract investments from across the world and prevent any untimely flight of capital. Fortunately, the 2016 Ease of Doing Business report from the World Bank ranks India at No. 13 in the world on the ‘protecting minority investors’ yardstick, while we rank a lowly 130 on the overall index.

The focus of the regulators on governance standards requires companies to make a concerted effort to ascertain compliance and presents an opportunity to align with the global standards and deliver incremental gains for their stakeholders. These efforts have been going on since about two decades as represented below:

Per capita availability and reliability

Examples of countries with better use of power

The pivot through Kabul

Case against a uniform asylum law

1. While India strives to better it’s record on the front of indigenization of technology, the domestic ecosystem is not conducive for measures like joint development and transfer of technology. Critically comment.