In a so called master stroke by PM Modi, the Rs. 500 and Rs.1000 denominations will now be out of circulation from the Indian economy. Let us look at various nitty-gritty of this policy decision.

No more a legal tender 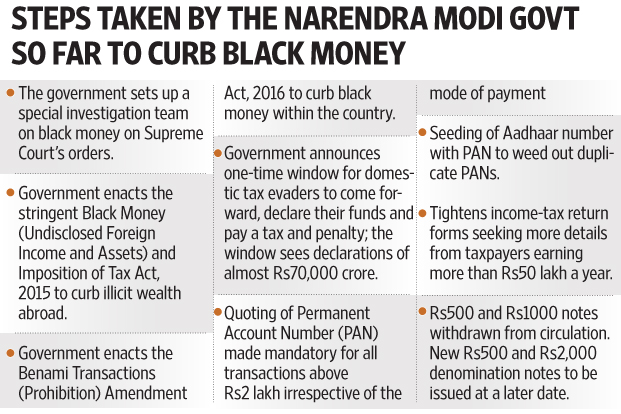 Reason behind such decision

Effects of the move

Effect on voter base

Thus, this move is expected to bring more transactions under tax net, both direct and indirect taxes would move up, more digital transactions will take place and reduction in parallel economy will increase the size of formal economy as more people will disclose income and pay taxes. This will make India a more tax-complaint society.

The government has decided has decided to ask Niti Aayog to review the performance of autonomous bodies that have mushroomed over the years with little oversight. These include more than 500 autonomous bodies such as University Grants Commission (UGC), Jawahar Lal Nehru University (JNU), Delhi Development Authority (DDA), Prasar Bharati and many more.

Expenditure Management Commission (EMC) headed by former Reserve Bank of India (RBI) governor Bimal Jalan had observed that these agencies were incurring expenditure to the tone of over Rs 60,000 Crores annually. The Prime Minister’s Office (PMO) has set up a high-powered committee headed by Niti Aayog vice-chairman Arvind Panagariya to look into the EMC’s recommendations. A few recommendations made by the EMC were:

The United Kingdom (UK) had undertaken review of its 900 odd autonomous bodies. On the basis of the review, the number was pruned by 285 institutions, resulting in annual savings of around $2 billion.

Atal Bihari Vajpayee government had also set up Expenditure Reforms Commission for similar reforms. However, the bureaucracy has in most instances come up with arguments justifying continuation of the system.

This move can also be seen as an opening for unwarranted, unwelcome, targeted interference in the matter of autonomous public institutions. However, this could be an important and constructive initiative due to the following reasons:

Dos and Don’ts – What not to do

It has to be ensured that the reviews are carried out in a manner convenient to the agencies. Review of finances and information requests should not provide the reviewer with powers to harass and annoy.

The span of such institutions is very widespread and hence the range of institutions and their mandates will require discretion to be used in reviews. Further, there cannot be a universally applicable approach to review all the bodies or all sectors.

The criterion to select and review the agencies cannot be fixed. Much of the review for potential savings will have to be done on a case-by-case basis, both in terms of choices of entities to focus on and criteria for separating waste from performance in the ones that are chosen.

Dos and Don’ts – What to do

Stating the terms of the review up front and sticking to them. It will add clarity and avoid a feeling of harassment and animosity.

Clarifying the principles used as basis to identify institutions for closer scrutiny, the definition of poor performance and performance criteria that will be used.

Sharing the workload and the power to identify poor performance with Union ministries that autonomous bodies are attached to, with peer institutions to identify potential savings, and with the institutions themselves will improve the outcomes. This will also reduce the workload of Niti Aayog and ensure the completion of the task in a timely and effective manner.

Allow institutions to opt out from being an autonomous body to operate at a more fiscal and administrative arms-length distance from the state. This could help in narrowing down the review exercise and also increase the public sector savings.

The review of these bodies is essential not only from the viewpoint of saving a lot of money but rather more crucial due to their role and how to leverage their hybrid structure. In the past little has been done to implement such recommendations. At times the bureaucracy has been a hurdle in this exercise. Hence, it is the need of the hour to go ahead with this review and ensure constructive rationalization of the autonomous agencies

The politics of perceptions

All about Tipu Sultan

Not a corporate sinecure

The arhar solution to pollution

A duty of tolerance