Economic Inclusion and Equality in 2017

The year gone by has seen a lot of political developments around the world whether it was the exit of Britain from the European Union (EU) or the presidential elections in the USA. The people around the world who have constituted the vote bank have been concerned about issues such as trade, migration, and structural labour market changes.

However, from an economic viewpoint, 2016 has not been a very happening year and has just seen nations recovering slowly from the after effects of the global crisis of 2008.

The economic activity in the US, Europe and other emerging markets has seen gradual improvement with a few vulnerabilities still in existence.

Expectations and Role Play in 2017

In the coming year, China is expected to continue focussing on reorientation of its economy away from exports and more towards domestic demand. Other Asian economies are also expected to and need to exhibit more dynamism in their growth strategies.

The economic challenges in 2017 will be a result of various political developments that have occurred in the last one year.

The major problems related to inequality can be addressed in many different ways.

As a result of the above suggestions, the policies can improve economic inclusion if the same are implemented effectively. Various stakeholders and professions need to join the economic world in this effort.

The IMF recommends a more equitable income distribution as a sound social policy and a sound economic policy as well. As per research, reduction in high inequality makes economic growth more robust and sustainable over the long term.

Political developments that have happened in 2016 will push policymakers to focus on those countries or people who have benefited least from economic integration or have been displaced by technology-driven labour-market changes.

Lastly, we need to understand that there is no ‘one size fits all’ approach to tackle inequality and promote inclusion around the world. Policies have to be flexible and suitable for different countries and regions depending on the set of problems they face.

Untouchability in India? Yes, it exists!

The Constitution of India has abolished untouchability under article 17. It has been made it a punishable offence under the Untouchability Offences Act, 1955. The practice of reservations has been going on for a while where in the society aims to reconstruct the society by giving the depressed, oppressed and the under privileged some status in the society.

Despite the constitutional provision, punishable offence and upliftment efforts, untouchability is present in the society, and unfortunately, thriving. 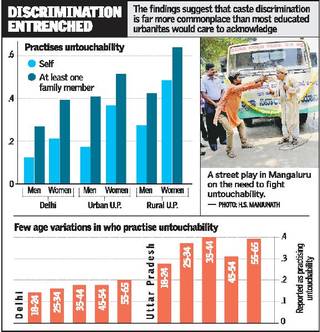 Untouchability is not easy to eradicate, but it does not mean it cannot be and thus should exist. If its existence is denied, the children will never come to know why it is practiced and what can be done to stop it. They will continue to follow the archaic and hurtful social norms without knowing the root cause of the same and thus crippling the growth of the society culturally. Hence, right from parents to teachers to government, all have to make sincere efforts to educate the children about the ongoing practice of untouchability in rural as well as in urban areas. This will make the children more aware of their unjust social customs and find ways to abolish them, thereby upholding the true spirit of constitution of India.

Poor swiped out in choice-less, not cash-less, society

Economy: What lies ahead?

Tarek Osman | The religion question in the new year

A German model for our MSMEs?

Let’s admit it, China is not our enemy