Pradhan Mantri Awas Yojana was launched in 2016 to provide financial assistance for construction of pucca house for all houseless and households living in dilapidated houses. The aim of this scheme is to ensure construction of one crore environmentally safe and secure hoses by 2019.

Currently, 32% of the Indian population lives in urban areas and by 2050 more than half the population would be moving to urban areas. However, still a balance needs to be maintained and rural housing has to be kept as an important part of policy making addressing varied needs of the rural residents. The government has to ensure that the housing provided to the rural residents is in sync with the expectation of these residents.

When, as a result of the growing urbanisation, the poor from the villages are required to shift to the cities they continue to stay in the slums but this transition gives rise to various challenges. The challenges are as follows:

To tackle problems such as those mentioned above and gear up for the increasing pressure due to urbanisation various policy measures have been undertaken.

Why PMAY is being rejected?

Tackling urbanisation, providing low cost housing to all with the ‘Housing For All’ target for the year 2022 have been some of the central focus areas for policy by the Indian government. Irrespective of this emphasis still a significant percentage of beneficiaries are not responding positively to the scheme. This segment of the population does not avail benefits provided under the scheme. This also leads to low indicators with respect to success of government schemes and policies and social development of the country.

The reasons for such a situation are:

Among the reasons mentioned above, it is observed from studies that the feel of disconnect and loss of social connections is a major reason for the beneficiaries to reject the housing provided by the government.

The relocation under housing schemes leads to a feeling of isolation. Social relations and community provides them a sense of support and comfort for the troubled days. Those residing in slums seek and provide a lot of psychological and material support from each other which the State cannot provide.

Slum dwellers rely on each other for their borrowing needs in a regular manner. Moving to new areas also impacts their earning capacity and labour force participation.

There is a greater need to understand what the individuals moving to a new place will gain or lose and what will be there response to the shift. This is because it is mentioned as a result of studies that benefits give the best results only if the people are made to relocate at an early age. Hence, a targeted approach is very important.

Steps that can be taken to address the above issues are:

Time to sustain renewed focus on Maternal and Child care

From targeted to universal scheme 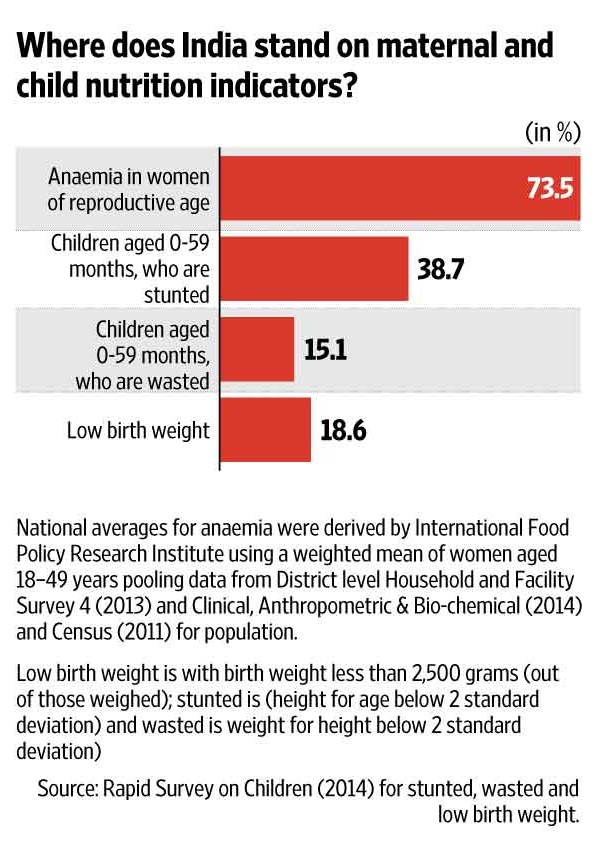 Nutrition constitutes the foundation for human development and becomes more important during the period of pregnancy and lactation coupled with wage loss.

If the government wants to prove that it is committed to the cause of providing optimal nutritional status, especially to the most vulnerable communities, it has to implement the programme effectively. India’s DPSP recognises the need for maternity benefits in

The introduction of maternity entitlements in the National Food Security Act (NFSA) has been hailed as a recognition by the State that all women are workers. Apart from wage loss compensation, maternity entitlements are recognised as a medium to promote exclusive breastfeeding for first 6 months. The conditional cash transfer scheme is to improve health behaviours, address the rights of all women as workers to have sufficient time for rest, recovery and child care during maternity. MBP is expected to deliver on these expectation.

Keeping safety on the rails

Gandhi for our troubled times

When Chola king was personification of a perfect judge