1. What is faulting? Discuss the landforms associated with faulting along with suitable examples.

A fault is a fracture in the earth’s crust due to tension force. It can also occur due to compression in hard and brittle rocks. 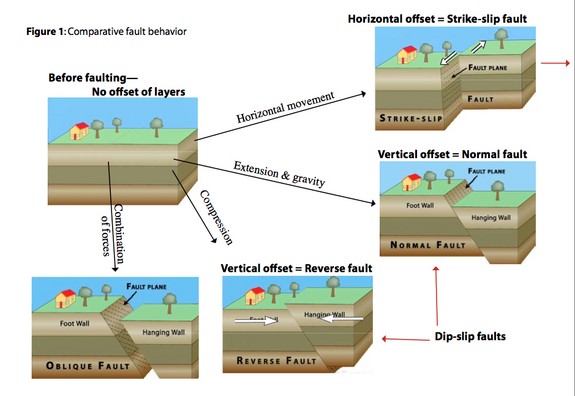 Block mountains: Block Mountains are smooth sloped, massive mountain structures. They have emerged from the faults on the Earth’s surface. Fault-block mountains are formed by the movement of large crustal blocks when forces in the Earth’s crust pull it apart. Some parts of the Earth are pushed upward and others collapse down.

Rift Valleys: A rift valley is a linear-shaped lowland between several highlands or mountain ranges created by the action of a geologic rift or fault. A rift valley is formed on a divergent plate boundary, a crustal extension, a spreading apart of the surface, which is subsequently further deepened by the forces of erosion.

Step mountains: When non uniform forces act, the mountains are formed step wise. I.e. the height of next block is less than the first one. Many step mountain chains are found in Western Ghats.

Plateaus: They are uplifted landmasses formed due to warping of land. They are high landmasses with flat top.

(Note: Diagrams are the most important aspect of Geography answers. It’s not a written rule but one – third marks are given for diagrams. So even if you write less, try to incorporate diagrams and maps where ever you can. That will fetch you very good marks.)

PS : Check the diagrams in the Best answer.

2. How do V shape valleys form? Explain with the help of diagrams and examples.

Conditions:
(a) Channelized flow starts on a rock surface.
(b) The rock is resistant and strong enough to support a vertical slope.
(c) River incision (down cutting) is rapid and at a constant rate.
(d) The valley sides are subject to slow weathering at a constant rate.
(e) The weathering detaches material from the valley side that falls into the river below.
(f) The river is able to remove all the weathered material.

Explanation of the simulation:
(a) The River is shown in blue and the rock in green.
(b) The rock is divided up into rectangles to represent the fragments it weathers to. The angle of rest of the weathered material is given by the diagonal of the rectangle. The dimensions of the rectangles can be varied to give the angle of rest required.
(c) Each click on the manual simulation represents a constant unit of time.
(d) The incision is shown in stages.
(e) At each stage it is assumed a layer of rock of uniform width is weathered and removed by free fall. This assumption is, of course, a simplification. In reality a wedge, wider at the top, than the bottom would be weathered and removed. The inaccuracy explains the unrealistic stepped profiles. However if these are smoothed out the gradient of the valley side is accurate.
(f) The method of rectangles is used because it will allow us to see how the valley sides flatten in the next simulation.

The diagram below shows how a steep sided V-shaped valley is formed and develops: 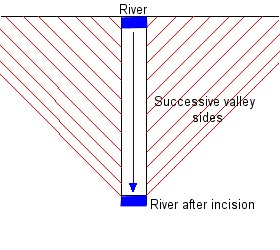 The valley gets deeper and deeper and wider and wider with the valley sides remaining at a constant angle. This is very unlikely to occur for any length of time. Although the development of a V-shaped valley increases the efficiency of runoff and may increase the volume of the river the amount of work the river has to do at each stage increases. The amount of weathered debris that has to be removed increases as the sides lengthen. Eventually, too, the gradient of the river is going to decrease.

3. Discuss the distributional pattern of volcanoes in the world.

A volcano is an opening in Earth’s crust that allows molten rock from beneath the crust to reach the surface. This molten rock is called magma when it is beneath the surface and lava when it erupts or flows from a volcano. Along with lava, volcanoes also release gases, ash, and rock. It’s a super-hot mix that can be both incredibly destructive and creative. 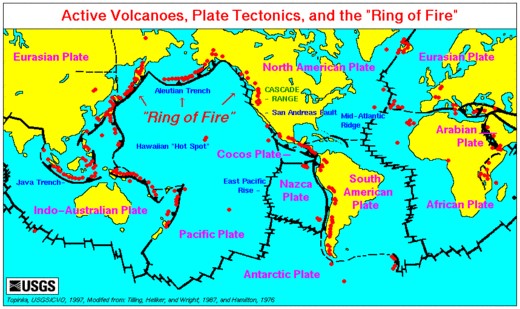 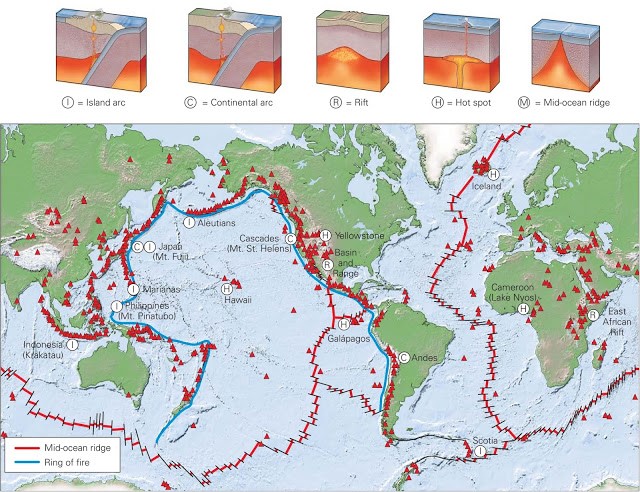 1.Circum Pacific Region: The greatest concentration of volcanoes is found in the Circum -Pacific Region also called’ ring of fire’ and includes almost 2/3rd of the world’s volcanoes includes regions from Aleutian to Kamchatka, Japan , Philippines, Indonesia .On the other side of ocean includes from Andes to central America , Mexico and Alaska . E.g. Hawaii islands

4. With a series of ponzi scams being unearthed recently, the need of tightening the regulatory regime has never been so pressing. Elucidate.

Ponzi/chit schemes are fraudulent investment plans in which the existing members are paid for their investment from the proceeds obtained from new members. However, the main problem with these schemes is that they fail whenever the chain of adding new members collapses.

Why there is need for tightening the regulatory regime? (Provide 4-5 points)

The menace of illegal investment schemes has grown big in recent years (Provide examples -SAHARA, SARDHA Chit Fund scam etc.) Experts say over 30,000 registered chit funds in the country are regulated by state registrars under the 1982 Chit Funds Act. Several states including Kerala, Maharashtra and Odisha have cracked down on unregistered funds. Tamil Nadu alone has over 2,000 registered chit funds companies with an annual turnover of R4,000 crore.

Attempts should be made to give powers similar to regulators such as the Competition Commission of India to recover dues and take action against deposit-taking firms illegally raising public money. While regulatory measures may offer some relief to investors, but the best way to avoid the mess is to be alert at the time of investing.

Pronzi scams are fraudulent investment operations where the operator pays returns to its investors from new capital paid to the operators by new investors, rather than from profit earned through legitimate sources. Recent data from CBI shows that frauds worth 1.2 lakh crore are being unearthed and investigated. Major reasons for this recent growth of pronzi schemes in India includes:

Political Lobbying: More than 2.3 lakh people are employed in pyramid and pronzi schemes. This allows politicians to lobby against strict regulations citing economic and job losses.

Lack of Awareness among People:

In most cases theses frauds follows a methodology of crowd funding, targeting middle class who are more attracted towards easy returns.

Thus it is high time for India to have a tight centralized regulation. A few directions possible in this regard includes:

5. Why farmers are committing suicide in many parts of the country? What is the remedy? Analyse.

The suicide rate for farmers throughout the world is higher than for the non-farming population. In India, one farmer committed suicide every 32 minutes between 1997 and 2005.

All over the world the impact of an industrial approach to boosting crop yields has stripped many small farmers of their self-sufficiency and thrown them into despair.

While the prices of crops have been pushed down – often even below the cost of production – the prices of inputs such as seed, fertilizers and pesticides have gone up.

With limited resources, farmers depend on borrowed money to purchase seeds and other inputs and to farm their land. A drop in their farm income could quickly lead to farmers owing more than they own.

Why farmers are committing suicide in many parts of the country?

Financial Stress: constant financial pressure related to the “Farm Crisis” and ongoing drought and flood which add to the economic problems. Farmers are forced to borrow money at high interests to buy vital inputs (seeds, machines, fertilizers). This leads to a vicious cycle. High indebtedness and exorbitant interest rates.

Loss of independence and control: many of the issues are not within the farmer’s control – disease, weather, government policy, real estate mafia but the debts are personal

Sense of Loss: repeated sense of hopelessness, loss of crops, loss of land, loss of income, loss of community, loss of family farm, loss of a way of life

Geographical remoteness and the potential for social isolation

Untreated Mental Illness: Lack of access to mental health services in rural areas and the stigma attached to treatment

15 years of economic reforms have given farmers access to expensive and promising biotechnology. However, these reforms have not led to crop insurance, land irrigation, or enough bank loans.

Provide recent government initiatives such as –

Major causes of farmer suicides in India:
1. Indebtedness: Recent study by National Crime Records Bureau shows 80% of farmers who suicided in 2015 taken loans from banks or registered micro-finance institutions. Inflexibility of banking rules and social pressure from non-finance institutions are a major reasons.
2. Low Income: Plus lack of secondary source of income.
3. Crop Failures: Over dependence on monsoon and lack of irrigation facilities.
4. Drought: Also relates to lack of irrigation facilities. Drought seasons recorded higher rate in farmer suicides.
5. Personal Issues such as illness, inability to meet celebration expenses for daughter’s marriage etc.
6. Lack of Value Added Services: Like banking, insurance etc.
7. Exploitation: Many cases farmers are exploited by middle men paying lesser than market value for farm products.
8. New Economic Policy: Inability of Indian agriculture to compete in world competitors along with reduction in Government support and subsidies. Benefits of NEP benefits the farmers and nation as a whole on the other hand. Eg: Import of Palm oil from ASEAN countries hurt coconut farmers in Kerala.
9. Genetically Modified (GM) Crops: Bt Cotton – seeds cost twice which leads to demand larger loans. As it produces better yield also, the blame is debatable.
10. Suicide Idea: Social attitude towards suicide – Suicide tendency in South India twice that of it in north.

The problems and concerns of agriculture sector are not unique, but existing for a long period. Proper planning and committed implementation can ensure reducing farmer grievances and complete eradication of farmer suicides.