Health being a major issue of concern in India has areas like abortion and medical termination where lack of clarity and societal discourses that has resulted in many divergences. Especially abortions being a sensitive issue, pro-choice versus pro-life remain at the centre of an often acrimonious ethical, legal, theological and political debate across the world.

The Medical Termination of Pregnancy (Amendment) Bill of 2014 relaxes the legal limit for abortion. The Supreme Court declined a woman’s plea to abort her 26-week-old foetus detected with Down’s Syndrome.

However, this case is different from the ones that have preceded it.

If the draft Medical Termination of Pregnancy (Amendment) Bill of 2014 been implemented as law, this case would not have come to court at all.

Under the 1971 Act, even pregnant rape victims cannot abort after 20 weeks, compelling them to move court.

Women rights are matter of concern and with laws not being conclusive it adds to the confusion. Further in the debate between choice and life it is important to emerge at a middle ground. Underlying all these initiatives has to be the primary message, that each pregnancy is a potential human being. Even as the provisions of the MTP Act have to be treasured by Indian women, it has to be used with responsibility and respect towards the unborn life.

GDP estimates for third quarter of FY 2016-17 have surprised many. The Central Statistics Office (CSO) has kept its January estimate for growth in GDP in 2016-17 unchanged at 7.1%.

This can be a signal that independent economic forecasters may have overstated the drag on the economy post demonetisation. 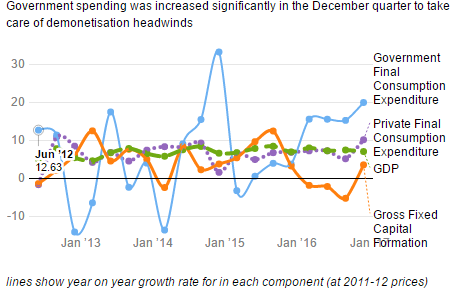 CSO estimates in many segments are in line with market expectations for Q3 FY17.

The government might have strategically mitigated the adverse impact of demonetisation through the timing of announcement and fiscal policy.

An increase in the prices of commodities, ranging from oil to metals, may be driving the strong growth in mining and manufacturing.

To get a more accurate picture, the revised estimates of CSO should be look forward to. The advance estimates are largely based on data from the formal sector and may underestimate the impact of demonetisation, since the informal sector is said to have suffered a larger impact.

Campaigning on a budget

Are our campuses under siege?

The tribal versus development

Connecting the other half

Trump’s no threat to the Indian economy