The Industrial Output data is captured and monitored, primarily, through two statistical activities –

About Annual Survey of Industries (ASI)

The Annual Survey of Industries (ASI) is the principal source of industrial statistics in India. It provides information about the composition and structure of organised manufacturing sector comprising activities related to manufacturing processes, repair services, gas and water supply and cold storage.

The ASI is conducted annually under the Collection of Statistics Act, since 1959, to obtain comprehensive and detailed statistics of industrial sector with the objective of estimating the contribution of registered manufacturing industries as a whole to the national income.

About ‘Index for Industrial Production’

The Index of Industrial Production (IIP) is an index which shows the growth rates in different industry groups of the economy in a stipulated period of time. The IIP index is computed and published by the Central Statistical Organisation (CSO) on a monthly basis.

IIP is a composite indicator that measures the growth rate of industry groups classified under,

The IIP is compiled on the basis of data sourced from 16 ministries/ administrative departments. Data for IIP are collected by various source agencies under different Acts/statutes.

In the past few years, the month-on-month IIP has shown excessively low, and even negative growth, which subsequently turned out to be out of sync with the actual manufacturing output growth measured through the Annual Survey of Industries (ASI).

Reasons for above concerns/issues:

The major reason being that IIP was measuring industrial output using baskets of production items and producing entities that had remained unchanged since 2004-05.

Meaning – The standard procedure followed was that a list of items was constructed in the base year and for each item the producing entities were identified. This structure was frozen.

In simple words, the IIP index was constructed with the output figures received month over month from the baskets of items and entities fixed in the base year. (It did not consider new entities or changes)

I.e., if an entity shut down, its output fell to zero. But since the basket was frozen no new entity could be taken in place of the zero-output one.

For instance, say Calculators may fall out of use and more smartphones may be consumed. The IIP was not equipped to capture such changes in the economy.

What is Base Year?

Base-year is the year used for comparison for the level of a particular economic index. The arbitrary level of 100 is selected so that percentage changes can easily be depicted.

What does the updated IIP offer? 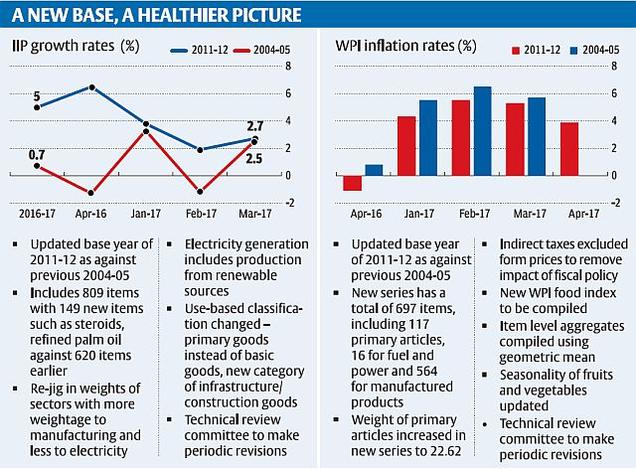 The main driver of growth in the economy remains consumption. Consumer durables grew 6.2% and non-durables 9% in 2016-17. The Seventh Pay Commission award to Central government employees and pensioners last year seems to have spurred consumption.

Demonetisation’s debilitating impact on manufacturing is visible in the updated monthly IIP for 2016-17. The average output growth for the seven months from April to October was 6.8%, and for the five months from November to March 2.28%. The IIP’s coverage by design is limited to the organised sector. The disruption in the unorganised sector is expected to get measured in the ASI.

It is widely acknowledged that the IIP numbers are an important input while estimating the GDP. Given the fact that now the base years of all the major macroeconomic indicators, the Gross Domestic Product (GDP) and the Wholesale Price Index, are aligned to — 2011-12, it is possible that the GDP numbers too could be revised upwards.

Instead of the periodic baskets revisions, a permanent standing arrangement will make sure that the IIP remains representative. There is need of monitoring and mapping of the index with the changes taking place in the economy.

Indian agriculture is a gamble with monsoon is an old adage. It is a gamble with almost everything is now a reality. Risks are multipronged and this makes it difficult for the farmers to raise their standard of living and hence suffer.

Suggestion of a free market in agriculture looks ideal on paper. But the implementation challenges will be critical for an age old occupation and remote reach it has. The need is for innovative solutions like e-NAM and some legislative reforms.

Held at ransom: on the recent ransomware attacks

The belt and road to China’s hegemony in Asia

Too many spies spoil the intelligence broth

How will GST impact MSMEs?