How to deal with the mega challenge of job creation

India may be the world’s fastest growing major economy, but the benefits of that growth do not seem to be percolating down to the masses. Job creation continues to be a major problem. 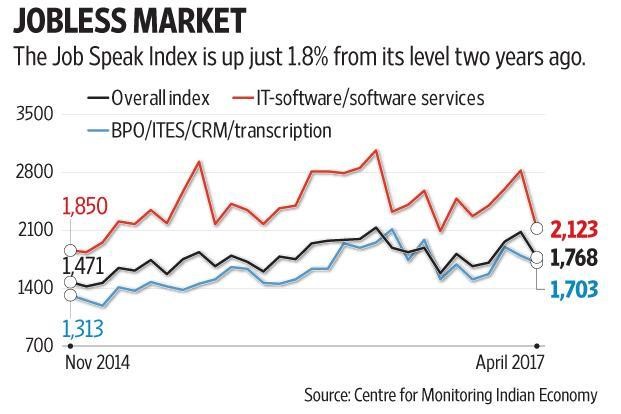 From the above Job Speak Index graph, we can observe that

The latest National Sample Survey (NSS) data for 2011-12, however, show unemployment was only 2.2% of the labour force, which is very low. On this metric, unemployment in India is much less of a problem than in other countries.

The low unemployment rates are misleading because many of those shown as employed are actually engaged in low-paid jobs that they take up only because there is no alternative. Economists call this “disguised unemployment” or “underemployment”.

A recent survey of youth unemployment shows that educated youth face greater problems. The unemployment rate for 18-29-year-olds as a group is 10.2%, but for illiterates it is only 2.2%, rising to 18.4% for graduates. As more and more educated youth enter the workforce in future, the policy makers should make sure that unless the quality of jobs available for them improves dramatically, dissatisfaction will mount.

What needs to be done to tackle this problem?

At the macro level, three structural changes are needed to tackle the problem.

First, the workforce employed in agriculture must decline.

The second structural change needed is to reduce the expectation from manufacturing as a provider of non-agricultural jobs.

To achieve all the above stated structural changes, multiple interventions are needed at different levels.

To sum up, all the above said measures if implemented effectively will lead to both generation of employment and improvement in quality of employment, which is a major concern today. Unless more jobs are created, India’s demographic dividend will turn into a nightmare.

Indian criminal justice system needs urgent reforms. One of the crucial aspect of the reform is under trials being languishing jails for years together. Bail system has unequally favored the rich and the haves. The Law Commission’s report serves a reminder of the same.

The ‘Prison Statistics India 2015’ report was released by the National Crime Records Bureau (NCRB) on Monday. Here are five things the data tells us about the state of Indian prisons.

Two-thirds of all the unnatural deaths (77) were reported to be suicides while 11 were murdered by fellow inmates — nine of which were in jails in Delhi.

Be it overcrowded prisons or unjust incarceration of the poor, the solution lies in expediting the trial process. For, in our justice system, delay remains the primary source of injustice. The Law Commission’s report needs to be implemented in letter and spirit and large scale criminal justice reforms need to be initiated.

Should agricultural income be taxed?

Love to hate the RTI

The cycles of distress in Indian agriculture

Why a rail development authority?

The maker of modern India