Cities are the engines of economic growth. Owing to a variety of factors ranging from availability of skilled manpower to the benefits of agglomeration, much of India’s future growth is expected to come from its cities. By 2030, India’s cities are expected to contribute nearly 70% of the GDP, according to a McKinsey Global Institute analysis. However, very little investment goes back into those very cities.

India’s annual per capita spending on cities, which stands at $50, is 14% of China’s $362, 10% of South Africa’s $508 and less than 3% of the U.K.’s $1772. The inevitable outcome of that under investment is bad infrastructure and poor quality of life.
These crippling infrastructure deficits matter not just because they cause hardships to residents, but because India’s economic growth itself could be under threat. If cities are unlivable, the benefits of agglomeration would hardly kick in and India would miss its narrow window of opportunity to develop rapidly.

India’s spending on urban infrastructure has to increase eight-fold. But much of this money may not come from the Central government. Cities themselves have to figure out ways to raise the money. However, the current revenue base of municipalities is narrow, inflexible and non-buoyant (meaning, it does not increase in step with the economy, unlike, say, a service tax).

The underlying lesson is that the government cannot afford to wholly rely on the private sector and will have to boost public spending as well as generate revenue on its own.

The government must commit to developing a city’s creditworthiness.

Credit rating of cities is the first step towards raising money through the bond market, subnational governments, and international lenders. Ratings are assigned based on the assets and liabilities of urban local bodies, revenue streams, resources available for capital investments and implementation of credible double-entry accounting mechanisms.
More recently, the government announced that 94 of the 500 cities have already obtained such ratings, necessary for issuing municipal bonds. However, only 59% of the cities assessed were found to be worthy of investment.

Cities rated AA are considered safe investments and may access the market directly without any intervention. Most of the metropolitan cities fall under this category. Cities rated A and BBB are less desirable in comparison but are still considered worthy of investment. However, these cities may need some sort of financial cushioning from the government.

Cities rated BB and below may find it difficult to raise funds. Even if they do manage to elicit investments, these are bound to come at much higher rates of interest, which might be economically infeasible.

As the bonds are not tax-free, the government is considering setting up an interest subsidy fund of Rs400 crore to offset the high interest rate.

Despite the optimism and investor appetite, municipal bonds may prove to be successful only in fast-growing metropolitan cities. Pune is on the verge of raising Rs2,300 crore, an amount well over what has been collected so far cumulatively by all cities till date. Ahmedabad, New Delhi, Bengaluru, Hyderabad and Chennai might follow soon.

Other ways of financing cities:

Lack of fund is not the only concern:

India suffers from a serious local democracy deficit. Without fixing that, throwing money at the problem may not help. Without serious introspection about the nature of our urban democratic governance, innovative taxes and user charges may not help much. The real opportunity that Indian cities offer is a chance to build a better democracy, where there is considerable local autonomy and government spending is transparent and accountable.

The reforms outlined above require immense political will and a real understanding of the problems cities face. Unfortunately, despite being the breadwinners of the economy, Indian cities have seldom been able to assert themselves strongly enough. Its time we focus on makig our cities creditworthy.

Gorkhaland movement is a question of identity, not development

The Gorkhaland movement is a long-standing quest for a separate State of Gorkhaland within India for Nepali-speaking Indian citizens (often known as ‘Gorkhas’). 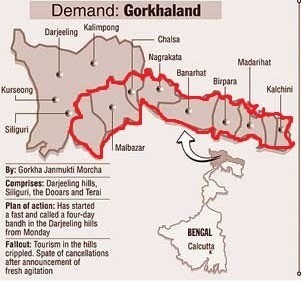 With roots dating back over a century, Gorkhaland is a classic subnationalist movement, not unlike those that have produced other States, most recently Telangana, Uttarakhand, Jharkhand, and Chhattisgarh. Beyond all else, Gorkhaland is a desire for the recognition, respect, and integration of Gorkha peoples in the Indian nation-state. Contra popular misunderstanding, the movement is neither separatist nor anti-nationalist; it is about inclusion and belonging in India.

Gorkhaland consists of Nepali-speaking people of Darjeeling, Kalimpong, Kurseong and other hilly districts. The people belonging to these areas hardly have any connection with the Bengali community and are different in ethnicity, culture and language.

History of Gorkhaland movement: A look back

History has it that the demand for Gorkha autonomy and a separate state dates back to more than a century and could be one of the oldest in the country.

Timeline of the Gorkhaland crisis:

The 2007 Gorkha uprising intensifies, following the 2005 Centre and state government initiative for a permanent solution of this region by bringing it to the sixth schedule of the constitution giving some degree of autonomy to a predominantly tribal area. But the Gorkhas opposed this sixth schedule and demand statehood gains pace.

The then CM (Mamata Banerjee) declarates Gorkhaland Territorial Administration (GTA) and Gurung was made its leader.

Darjeeling unrest: Gorkhaland movement is a question of identity, not development

Moreover, the perceived cultural dominance of Bengalis in the hills widened the gulf between these two communities.

Creation of Gorkhaland: Pros and Cons

The demands for separate statehood in India have been there even before India’s Independence. Even after the state re-organization of 1956, there were demands from various corners of the country for the creation of a separate state. Linguistic, cultural, ethnic and economic distinctions can be traced as the core reasons behind these demands.

Heralding self-governance, recognition, and belonging in India, Gorkhaland remains the dream for Darjeeling citizens and many Nepali-speaking Indians across the country. It stands as a key means to redress the Gorkhas’ enduring history of discrimination, misconception, and marginalisation in India.

The basic point about Gorkhaland is IDENTITY and NOT DEVELOPMENT. By demanding Gorkhaland, the people of Darjeeling-Kalimpong are opting out of West Bengal’s domination, and opting in to the democratic frameworks of India writ large.

Hegel said, “We learn from history that we do not learn from history”. The repetition of history in the Gorkhaland issue is the living proof. Especially in the post-independence, where the rise and fall of momentum in demand follow the rise and fall of the party involved. The solution lies in pleasing the population rather than the parties. Gorkhaland can become an epitome of decentralisation or a failed divided state. The choice is in the hands of people protesting. Are they protesting for the right cause?

Context of the contest

The crossroads at the Doklam plateau

In the age of data

For a hygienic track

Dancing on the edge

Back to waste basics

1. Recent initiatives and steps taken by the government indicate towards an economic discourse that reflects a liberalising pattern across sectors. Do you agree? Critically examine.