Last month, the NITI Aayog released the Three-Year Action Agenda (TYAA) for the government, a roadmap for reforming the various sectors of the economy.
Its agenda for the agriculture sector, and how best it can rescue the sector has been discussed in this article.

It talks of action pertaining to-

The recommendations are good and have been suggested by earlier committees like the High Level Committee (HLC) on Management of Foodgrains and Restructuring FCI (headed by Shanta Kumar), the Task Force on Agriculture headed by the Vice-Chairman of the NITI Aayog (May 2016), the four volumes (out of 14) of the Committee on Doubling of Farmers’ Income etc. The government, thus, has ample reference points for reforming the food and agriculture sector.

Issue: The TYAA, however, does not prioritise policy actions, nor does it talk about the role of trade policy in agriculture, or reforming the massive system of food and fertiliser subsidies.

5-Point action plan based on priority:

India has shown in the case of milk, through Operation Flood — a la the AMUL model — that farmers can get 70-80 per cent of the price paid by consumers.
We can have “Operation Veggies” on similar lines. A beginning can be made with at least onions, potatoes and tomatoes.
That would require buying directly from farmers’ groups (FPOs), setting up logistics from grading, storage to movement, and linking them to organised retail (including e-retail), large processors and exporters.
The government must commit enough resources as it did for Operation Flood and also change certain laws, including the Essential Commodities Act (ECA).

The e-NAM scheme, which is supposed to create an all India market, in order to ensure better prices to farmers, has not succeeded in its endeavour so far. Software is still being installed in mandis to enable them to switch auctions from the shouting platform to the electronic ones. Inter-mandi and inter-state transactions are very rare.

An easier way to improve farmers’ profitability is to open up exports of all agri-products, without any restrictions, and allowing private trade to build global value chains, keeping the ECA in abeyance. This would require a change from the current pro-consumer approach to one that is focussed on farmers.

Especially in water. The Pradhan Mantri Krishi Sinchayee Yojana is mandated to complete 99 irrigation projects by 2019, which will bring 76 lakh ha additional area under irrigation. NABARD, with Rs 40,000 crore as Long-Term Irrigation Fund, is to help states in completing these projects. It would be a commendable achievement for the government if it can complete these projects as planned. But open canal systems with flood irrigation don’t give high water-use efficiency. 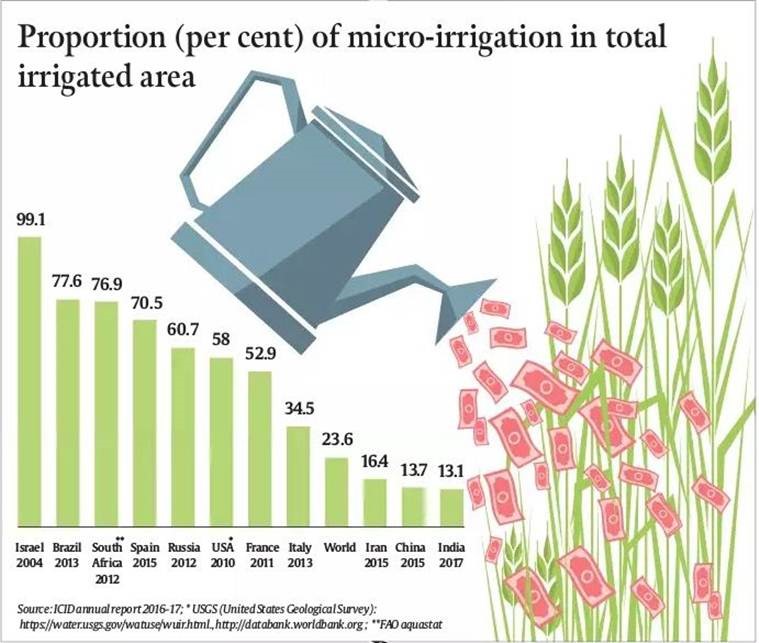 Structural reforms and not fiscal stimulus is what Indian economy requires

The government of India is working on a plan to revive the economy after growth slipped to a modest rate of 5.7% in the first quarter of the current fiscal compared with 7.9% in the same quarter last year.
Media reports suggest that it is mulling a fiscal stimulus to boost growth, which could increase the fiscal deficit.
The idea is that in the absence of sufficient investment demand from the private sector, higher government expenditure will help boost gross domestic product (GDP) growth.

There are sound economic reasons why the government should adhere to its fiscal commitments.

Interventions that go beyond stimulus are required:

Economic growth has slowed considerably and the economy needs policy intervention that goes beyond running a bigger deficit.
What the economy needs is deeper and broader structural reforms that will help attain sustainable higher growth in the medium to long run.

Irrespective of the slowdown, the Indian economy needs higher public investment, but it need not come at the cost of fiscal discipline.

Turn the economic ship around

A fight against prejudice

Be with Warren Buffet not against him