The talks to negotiate the India-European Union trade pact, the Broad-based Trade and Investment Agreement (BTIA), did not progress during the 14th India-EU Summit, held in New Delhi on October 6.
Both sides continue to recalibrate their bargaining power and understanding of their relative positions on the international stage.

Much has changed for the EU since the last summit held in Brussels in 2016:

India and the EU reaffirmed their commitment to a “rules-based” international order and a “multipolar” world.
This is significant in the context of the U.S. moving towards reneging on several international deals. Mr. Trump has said he is going to “decertify” the nuclear deal with Iran — a deal that the EU is keen to uphold — and his administration has given notice of intent to withdraw from the Paris Accord.
The reference to multipolarity is a recognition that there is more than just one chair at the top table, not just with the U.S.’s shifting position but also due to Russia and China’s ascent.

The India-EU joint statement on terrorism this year called for “decisive and concerted actions” against Hafiz Saeed, Dawood Ibrahim, Lashkar-e-Taiba and other purveyors of terror; this will further bolster India’s efforts to call out Pakistan on the issue of sponsoring terror.
The EU itself has been no stranger to terrorism these last few years and the two sides have agreed to enhance cooperation at multilateral and bilateral interactions.

The talks regarding Broad-based Trade and Investment Agreement (BTIA) didn’t move forward because of following challenges:

The liberalisation of services and access to EU markets for those who deliver them go hand in hand with the liberalisation of the goods market; wanting an open market for automobiles and liquor but unduly restricting the movement of natural persons is not acceptable.
There are winners and losers from globalisation on both sides of the border and it is up to governments to institute policies to redistribute the gains from trade.

India and the EU should continue to welcome each other’s leadership roles in the world, primarily because of commonly shared values.

But the strength of China’s relationship with EU member states themselves is heterogeneous, with China trying to make inroads into Eastern and Central Europe through infrastructure investments. This makes it vital for India to cement its bonds with the EU further.

With around €100 billion in bilateral goods and services trade last year, India and the EU have a lot to gain from a trade deal. It’s not just about trade. It is far from clear what presence the EU will have in a decade’s time.
However, it will certainly be beneficial for both India and the EU to keep each other close as they feel their way around the emerging international order.

Making service sector one of our strength

China and India are two of the fastest growing economies in the world. But they are following very different growth paths. China is a formidable exporter of manufactured goods. India has acquired a global reputation for exporting services, leapfrogging the manufacturing sector.

Industrialization is not the only route to rapid economic development:

It is argued that industrialization is the only route to rapid economic development for developing countries. The potential for explosive growth was seen only in the manufacturing sector.
This is no longer the case:

There is mounting empirical evidence that developing countries are relying more on services and less on manufacturing as drivers of growth and job creation. 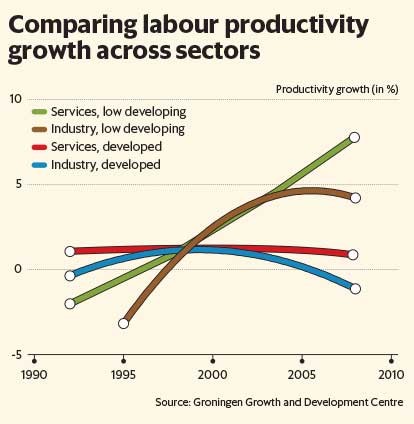 The chart shows the sectoral trends—agriculture, manufacturing and services—over the last four decades, for a large group of countries.
In the early 1970s, the relationship between the manufacturing labour share and income was far steeper than it is today, having followed a progressive erosion of the initial strength of this correlation over the past four decades.

The relationship between income and economic structure has shifted over time, with countries across the income distribution uniformly increasing the share of labour in service sectors.
While global growth convergence in manufacturing was a clear and strong trend some decades ago, it is no longer as strong in recent decades. Services show stronger growth convergence in recent decades.
A young population is generally more connected with technological changes.

Example: Take the example of mobile technology and examine its role in banking. Banking is currently concentrated in the urban areas, but cities are saturated with bank branches.
On the other hand, 300 million rural people across 300 districts in India have no access to banking.
Expansion of digital technology can play a big role in improving rural access to banking. Financial inclusion can be achieved through last-mile connectivity. Services are spatially more neutral compared to manufacturing.
So financial inclusion could in turn help medium-size cities, small towns and villages to become new drivers of growth.

The process of globalization in the late 20th century led to a sharp divergence of incomes between those who industrialized and broke into global markets and the “bottom billion” in some 60 low-income countries, where incomes stagnated.
India shouldn’t wait for China or other such giant industries to become uncompetitive in labor-intensive manufacturing. It should leap forward with its services sector which is already one of its strength.
Leaping forward would offer new hopes to other developing countries as well who are struggling to strengthen their economy in this competitive world.

Where have all the women leaders gone?