ICJ seat and its importance to India’s Diplomacy

India’s Justice Dalveen Bhandari was re-elected to the International Court of Justice for a nine-year term, after Britain withdrew its candidate, Christopher Greenwood, from the race.

Why the victory is significant?

What is the ICJ?

How are judges elected?

How do member countries nominates judges?

On what basis are judges elected?

“The extraordinary support from the UN membership is reflective of the respect for strong constitutional integrity of the Indian polity and the independence of the judiciary in India.”

The victory tells us that indeed a new India is emerging that is no longer risk-averse and is willing to fight it out openly. In this case, of course, the world witnessed how the rise and fall of powers continues to shape the global governance architecture.

The “India: Health of The Nation’s States” report was released recently. The India State-level Disease Burden Initiative, was a joint study conducted by the Indian Council of Medical Research, Public Health Foundation of India (PHFI), and Institute for Health Metrics and Evaluation.
India’s health challenges have changed sharply over the past couple of decades and is going to continue changing.

Global precedent shows that a country’s health profile changes as its economy and level of urbanization grow.

The World Health Organization predicts that over the next decade, NCD deaths will increase by 17% globally. 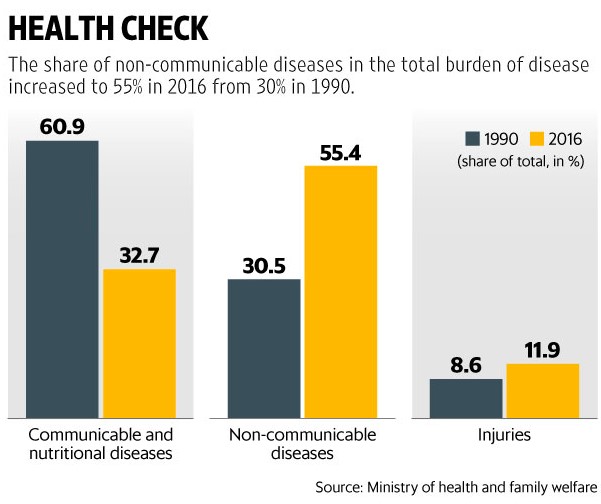 There is wide divergence between the health profiles of various regions and states in India.

In the above scenario, Centre-dominated health policymaking will diminish the effectiveness of state response.

There is a need for a multi-pronged approach.

A broad and diffuse response will not be easy to implement. Addressing the weak fundamentals of India’s health system is critical. In the wake of rising cases of NCDs preventive healthcare system of India needs to be strengthened.

India’s nominee to the International Court of Justice (ICJ) Dalveer Bhandari has been re-elected to the fifth seat of the court after Britain withdrew its candidate from the election.

The major functions of the International Court of Justice are

Judges of the ICJ:

Part of: Main GS Paper I – Social issue and Welfare

‘Peace Clause’: India putting in efforts to make it permanent

Infrastructure Status to the Logistics Sector

The Centre has granted infrastructure status to the logistics sector.

Issues with the sector till now:

By June 2018, you will be able to see Smart Cities

Banking the unbanked: the Indian revolution