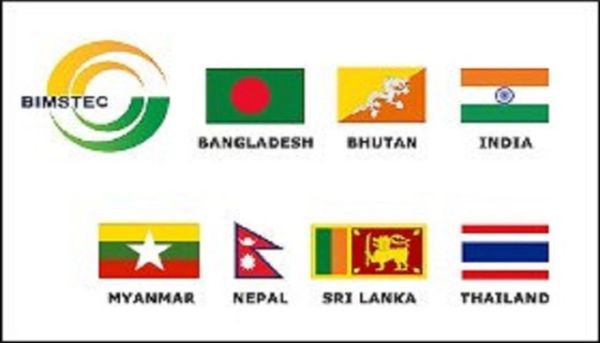 In 1997, a new sub-regional grouping was formed in Bangkok and given the name BIST-EC (Bangladesh, India, Sri Lanka, and Thailand Economic Cooperation). In 2004, leaders of the group agreed that the name of the grouping should be known as BIMSTEC. The Bay of Bengal Initiative for Multi-Sectoral Technical and Economic Cooperation (BIMSTEC) is South Asian and South East Asian countries which are dependent on the Bay of Bengal. In 2017, the 20th anniversary of BIMSTEC is celebrated.

India is an active participant of BIMSTEC and is considered an extension of India’s Neighbourhood First Policy and Look-East Policy. However the achievement in last 15 years have not been much.

SAARC has hit a road block because of Pakistan. As far as trade and economic cooperation is concerned, Bangladesh, Afghanistan, Sri Lanka are unhappy. So for India it is an important forum to link remaining countries of SAARC with South East Asia particularly with Myanmar and Thailand. There is an important strategic value. Lot of economic and technical cooperation can be there once moved forward through BIMSTEC.

When it comes to regional cooperation, BIMSTEC can take place of SAARC because there are no differences among 6 member countries and India is willing to play a leadership role. There are well identified areas where progress has been made by India and other countries bilaterally- Free trade, national security, disaster management etc. As all the countries see these issues in the same perspective and importance, so practical areas of cooperation are being identified and there is progress in those areas.

India and Bhutan met in backdrop of doklam standoff. Bhutan is caught in difficult situation as they have border difference with china which is unresolved. Bhutan is not in a position to challenge china but they have stated that china is trying to be intrusive in the disputed territory. Whatever china does adversely affects India’s security. China has become aggressive in a peaceful area as shows in Chinese policy to gradually increase their areas of possession in all parts of neighbourhood- South China Sea, towards Japan, towards Bhutan.

So India comes as friend of Bhutan as well as security partner of Bhutan and also safeguard India’s security. They did not expect India to confront them because in South China Sea, the countries protested but they did not have the capacity to confront china.

India and Nepal relationship has seen many ups and down and recently it has not been smooth. China has briefed Nepal over doklam standoff but it has remained neutral so far. Nepal has signed on the OBOR.

India has many investments in Nepal and aid in different forms for roads, universities and social hospitals etc. China is trying to create gulf between India and Nepalese establishment. As far as doklam is concerned, the nepalese PM has said that it will remain neutral.

Bhutan has prospered by allowing India to explore its water resources and making hydroelectric projects. Nepal has been reluctant to allow India to tap into its potential. India wants Nepal to reconsider this behavior as it will help it to prosper as there are areas where India can cooperate with Nepal easily.

In this region, the projects initiated by India which connects the neighbourhood has been a priority of India. The major connectivity project is India-Myanmar-Thailand road on which work has been speeded up. There is direct road from northeast to Thailand to Myanmar. There are other important aspects of connectivity- transportation from Nepal to India to Bangladesh. If Indian truck goes from Bangladesh to north east and then to Myanmar without much paper work, it is in true essence promoting better access to trade and economy across border. License, transit permit, custom regulations should be easy so that trade, transit and transport, tourism is easy.

Even OBOR is essentially a connectivity project. So connectivity across nations plays a great role in fostering relations.

Sri Lanka’s role has been unclear. China is targeting countries like Bangladesh, Sri Lanka, Myanmar so that it can have some kind of naval basis there. The modus operanda is to offer some credit, technology and labour to create facilities and infrastructure and then make use of it. In Sri Lanka, China invested more than 1 billion dollar in port. Now it has been given on lease to china because it could not produce enough revenue. This is a direction India has to advice Sri Lanka not to go and safeguard their own interest and also India’s security interest.

There can be a regional grouping of South East Asian nations, South Asia nations and keep Pakistan out of it. This has been achieved in certain extent. Initially Bhutan and Nepal were not in BIMSTEC but now they are there. Objective of Indian policy is to create a regional group that doesn’t have Pakistan so that there is more coherence and harmony and achievements.

The future of BIMSTEC stands in strong technical and economic cooperation. The focus and synergies in one direction will allow the group objectives to be fulfilled. If all countries work to focus, it will be at advantage to all countries and that should be the way forward.

NEW INITIATIVE- IASbaba’s Think, Rethink and Perform (TRP) for Interview 2017 (Open to Everyone)