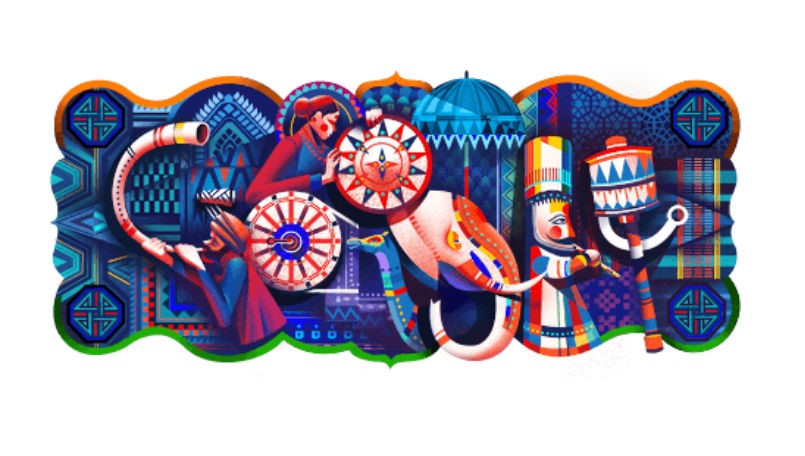 The handloom industry in India exhibits a national identity that is admired and appreciated all over the world given its unique, unparalleled, rich heritage. It exhibits the spectacular craft of our artisans and nourishes the social fabric of the country.

However this handloom art is in crisis.

According to textile ministry’s Handlooms Census (2010) –

Since India produces almost 85 per cent of the world’s handloom products, we can ill afford to let the handloom sector and handloom art to fall into decline.

Handloom art and weaving centres are clustered all over the country. Many of these art genres are popular in local and international markets.

The Chanderi cluster, for example, is known for its genre of silk garments and sarees . Other clusters include the Varanasi cluster for Banaras silk sarees, and the Chirala cluster for its traditional varieties of zari (golden metal threads) sarees and dhotis.

The Himachali topis, handbags from Kutch, the Kolhapuri chappals, jute bags and silk sarees from Assam – they create a landscape of unity in diversity and cultural parity.

These clusters preserve traditional knowledge, which is passed from one generation to another. The exclusivity and the rarity of these handloom art forms provide them with the much-needed competitive advantage.

We are all aware of the farmer suicides, but tragically enough the death of weavers in the last 20 years has gone unnoticed. For instance, there have been 615 suicides in Andhra Pradesh from 1997-2010 and about 50 in Varanasi in the last three years.

As digital India is the call of the hour, technological advancements are increasingly encouraged in the country and rightly so. Sadly, this impacts the handloom industry negatively and the cut-throat competition from power looms has put the very existence of the handloom sector in doubt.

Many weavers are uneducated and rely solely on their skills that have been passed on to them by their previous generations. This is traditional knowledge for them and it is the government’s responsibility to take their concerns and future into account.

The Chanderi town is home to one of the biggest concentrations of handloom weavers in central India. Here they prepare a finely embellished silk and cotton based fabric with woven patterns of zari.

Chanderi has 30,000 inhabitants and about 4,500 active looms. About 60 per cent of the inhabitants are dependent on this centuries-old traditional business either directly or indirectly.

The textiles ministry had sanctioned a four-year mega cluster project for Chanderi and the department of rural industries of Madhya Pradesh had also been implementing several schemes aimed at improving the production and marketing of Chanderi products.

Chanderi weavers sell their products across the country at a premium under the brand name of ‘Chanderi’, which is known for its unique art and designs.

The demand estimation, order generation, and distribution of finished product from Chanderi to different parts of the country is a complex and unstructured process. Weavers use different methods to reach their consumers.

They sell directly to their customers (shopkeepers in other cities) by visiting their place with the products, participate in trade fairs, or sell to intermediaries.

The role of NGOs and social enterprises in saving handloom art cannot be overemphasised.

For instance, NGO Digital Empowerment Foundation (DEF) has fulltime operations in Chanderi. DEF created a web portal to help weavers sell their products, going beyond reducing physical market separations and building a bridge to provide market access to their producers.

The Chanderi model has been able to demonstrate the viability of market-based solutions for alleviating the poverty of ‘bottom of the pyramid’ producers, while also salvaging dying art forms.

Such interventions when done in a timely and appropriate manner can create functional ecosystems of partnerships between the social sector, governments, and poor weavers to successfully develop markets for dying art forms.

Like any other market, handloom is also required to serve three main functions:

(1) matching of demand and supply that involves identification of buyers and sellers, for which matchmaking product offerings with needs, as well as price discovery is important;

(2) facilitating exchanges or transactions, for which logistics, payment mechanisms, and facilitation of credit along with communication between buyers and sellers become important; and

(3) providing institutional infrastructure such as enforcement of legal and regulatory mechanisms.

These functions are already well-developed in formal urban markets, but the active intervention of external agencies may be required in poor, rural areas to make the markets work efficiently by reducing market separations. External non-governmental agencies can be of great help in undeveloped informal BOP markets in many parts of India.

The budget should aim at improved infrastructure, education and skill-set training to nurture the industry as it looks promising with demands of domestic and export consumption.

An amazing transformation has occurred in the course of a generation. Young men and women in rural India are far surpassing their parents’ levels of education.
As late as 2001, only a little over 25% of all rural 18-year-olds were attending schools, the rest having dropped out earlier. By 2016, the share of 18-year-olds in schools and colleges had gone up to 70%. There is a rapidly rising trend of education in rural India.

Modern economic growth has little room for people with rudimentary skills and low education levels. The age of assembly-line production has given way to newer technologies, with complex processes, requiring a better trained workforce.

Young people trained in this shabby manner would find it very difficult when it would come to searching jobs.
They won’t be able to cover the learning deficits that have accumulated from years of attending low-quality rural schools.
The belief that education will be the road out of precarious livelihood on the farm has gained ground. Inspired by this hope, parents are sending their children to schools in rural India. Most of them are first-generation learners.
Soon, however, this younger generation will be graduating from high schools and colleges—and then they will find that there are very few good jobs.
A reaction against such sort of education would be- “When my first-born was unable to make much of his 16 years of education,” a parent might argue, “why should I waste time and money on the education of my second-born?”
With mass disappointment, the rising trend of education is going to fall.

A highly regimented and top-down system currently exists in India.
It needs to give way to another system in which teachers are innovative in the classroom and parents are involved as co-decision-makers.
Smaller-scale innovations developed by state governments and non-government organizations shows the huge potential of societal innovation. These reform efforts should serve as the starting points for a broader and increasingly essential public conversation.
Raising the quality of education in rural schools is essential, and a nationwide dialogue is necessary for charting the way ahead. Business-as-usual will not fix the problem.

Should euthanasia be allowed

How can the government revive manufacturing?

Success at the bottom of the pyramid

A game of trade and balance