Given China’s influence in Bangladesh and Myanmar; the stakes are high for India.
While China is keen to keep international forces out of the Rakhine dispute; India is trying to walk the tightrope of taking along both Bangladesh and Myanmar governments towards a viable solution for the Rohingya crisis.

The “Unwanted girls” in India

India has 63 million “missing women.”
The 2018 Economic Survey gives us a powerful new number: India has twenty-one million “unwanted girls”. This number describes the girls who are born but not treated well. Crafting a new statistic that brings a spotlight to this problem will be an important legacy of the Economic Survey.

Who are “Missing women”?

Amartya Sen raised this problem in 1990 with an article titled “More Than 100 Million Women Are Missing”. He counted the missing women across several countries such as India, China and Pakistan. Many people knew the problem existed, but Sen’s number, called out in the title of his article, made the problem salient.
Today, there are 63 million fewer women counted in the Census in India than there naturally should be.

Who are “Unwanted girls”?
These are girls who are alive but likely disfavoured by their parents.
They receive less healthcare and schooling, with life-long effects on their well-being.
These girls are more precisely described as “less wanted” children. They are daughters that parents gave birth to when they were really hoping for a son.
There are twenty-one million unwanted girls under the age of 25 in India.

A couple wants to have two children, ideally one son and one daughter, but it’s especially important to them to have at least one son.
If they have two daughters in a row, they will keep having children until they get a son.
In such cases, the last child in the family is a boy.
By aggregating all families, it is seen that the sex ratio of the last child (SRLC) is male-skewed.

SRLC is thus a revealing measure of parents wanting sons. 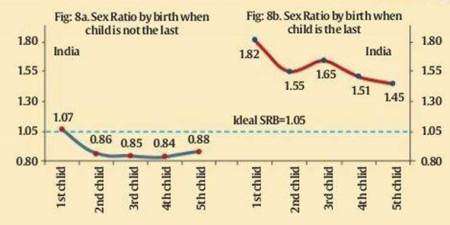 Many couples have a girl when they were hoping for a boy. If the girls are nonetheless treated equally, this would not be much of a problem. Unfortunately, girls get fewer resources than boys.
Even if parents treat their children equally, girls are disadvantaged by being in families with fewer resources to spend per child.
Moreover, parents who passionately want sons, unsurprisingly, favour them once born. Boys are more likely to get immunisations.

This is why having 21 million unwanted girls is unacceptable.

A decline in the number of unwanted girls isn’t necessarily progress. Unwanted girls arise when parents keep having more children to obtain a son. Couples are becoming more reluctant to have large families and are gaining better access to ultrasound. “Trying again” might give way to more sex-selection.
It will not be progress if we achieve fewer unwanted girls at the cost of more missing women. The goal should be for both numbers to come down.

The tussle between political executive and the bureaucracy in Delhi

The chief secretary (CS) of Delhi was reportedly roughed up by two MLAs in the Chief Minister’s (CM’s) presence. One has heard of humiliation of officers before, but seldom involving the chief secretary.

The CS is not an ordinary bureaucrat. He is the head of the civil administration in the state or union territory, an officer who represents not just his own service but all services within the civil administration. His word in sorting out contending arguments and dissension among officers is final. It is his duty to run an efficient administration and give the CM fair and impartial advice.
In Delhi, the CS has an even more challenging role — he has to report simultaneously to the CM and the lieutenant governor (LG) and walk a tightrope between the vision and concerns of both, even when they are not always on the same page.

The capital’s asymmetric division of powers between the elected and the selected has been an issue in recent times. It vests the LG with absolute powers without corresponding accountability and leaves the elected chief minister faced with complete responsibility but without requisite powers.
The basic principle of parliamentary democracy is that the elected executive decides policies and programmes while the bureaucracy executes them. There can be occasional friction. But overall, the two arms of the executive work in tandem, as a single, cohesive branch. In the eyes of the law, the actions of secretaries are actions of ministers. On occasions when secretaries disagree with their ministers, the latter either agree with or overrule the babus.  It is upon a CS that a CM is dependent for governance and delivery.

The MHA, vide a notification dated May 21, 2015, added a fourth subject, “Services”, to the existing list of three subjects of Public Order, Police and Land which were already reserved with the Centre.
Through a judgment on August 4, 2016, the Delhi High Court upheld the notification, ruling that “Services” was outside the domain of Delhi government.
The high court also ruled that the “aid and advice” of the council of ministers is not binding on the LG.
Hence, the elected executive in Delhi doesn’t have even a modicum of control or authority over government employees- from a peon to the chief secretary, the transfer, posting, appointment, creation of posts, service conditions, vigilance matters, leave sanction.

The Delhi government’s petition challenging the Centre’s notifications was heard by a Constitution Bench of the Supreme Court in December 2017. The order is since reserved.

The AAP has for long complained that the Centre is paralysing its executive functions through the Lt. Governor and that the bureaucracy is refusing to obey government orders.
But the proper response to this is to keep pushing for the constitutional changes that will give Delhi full statehood rather than targeting police officers and civil servants.
Both the Centre and the Delhi government must work together to see that the administration is not brought to a halt in the Union Territory.

The very concept of parliamentary democracy is at stake. The current imbroglio is only a manifestation of a deep-rooted malaise. It is time to address the structural malaise afflicting Delhi’s body politic.

The two pillars- the political executive and bureaucracy- need to hold the structure together, or else one would develop cracks and bring the other down with it or lead to a go-slow which would prevent doing things that matter the most.

The champions of clean air

Adopting a wait and watch approach

Canary in coal mine

Creative Guidance – You are not an Island – Inspirational & Educative Articles